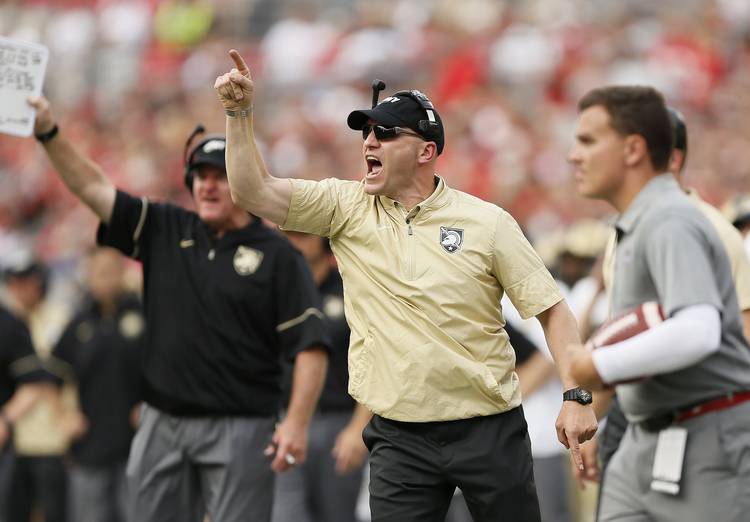 Army head coach Jeff Monken yells to his team during action against Ohio State at Ohio Stadium in Columbus, Ohio, on September 16, 2017. On Saturday, Dec. 22, 2018, Monken's Army squad rolled to a 70-14 win against Houston in the Armed Forces Bowl. (Adam Cairns/Columbus Dispatch/TNS)

We’re 50 days away from the 2019 season opener, but it’s never too early to talk college football. We kick off our 11th annual countdown series of our preseason Top 25 as selected by the American-Statesman sports staff. Last year’s eventual CFP semifinalists ranked 1st, 2nd, 8th and 13th in our 2018 poll.

The Black Knights’ best-case scenario: Showing the form that led to an overtime loss at Oklahoma and a 70-14 win over Houston in the Armed Forces Bowl, Army throws the College Football Playoff selection committee into a tizzy with a perfect regular season.

And their worst-case scenario: Worst case? A rebuilt defense with seven new starters can’t match last season’s production, and service-academy rivals Air Force and Navy — who lost by a combined 10 points to Army last season and are familiar with slowing the Black Knight’s option attack — score enough points to pull off the upsets.

Inside the Black Knights

Spring cleaning: While quarterback Kelvin Hopkins triggers the potent option offense, Monken and his staff wanted to find a new fullback to soften up defenses. Rashaad Bolton stepped up in the spring game, scoring two touchdowns and a physical style typical of the Knights’ option attack. … Monken kept his coaching staff almost entirely intact. And why not? The Black Knights, who had one winning season in the 17 years prior to Monken’s arrival, have had three consecutive winning campaigns and are coming off their first 11-win season in school history as well as their highest final ranking in the AP poll (No. 19) since their last unbeaten season in 1958.

Big Chiefs: Nothing matters more in the world pf service-academy football than winning the Commander In Chief’s Trophy, which recognizes the top football team between Army, Navy and Air Force. The Black Knights beat both last season and won the outright trophy for the second straight time. After 14 consecutive losses to Navy, the Black Knights have now beaten their arch-rival in consecutive seasons.

Stiff-arming the competition: Can a service academy player ever win the Heisman Trophy again? Navy’s Roger Staubach last pulled off the feat in 1963, and Army’s last Heisman winner was Pete Dawkins in 1958. But Hopkins could emerge as a dark horse candidate; in 2018 he became the first player in school history to run and pass for more than 1,000 yards in the same season, and that trip to Michigan looks like the only significant hurdle until the season finale against Navy.

Saluting the locals: Not surprisingly for a service academy, Army’s long recruiting reach extends to every part of Texas. Austin is no exception; Vandegrift’s Spencer Jones, a 2018 all-Centex linebacker selection, signed with Army this past year, and the Black Nights have an offer out to current Bastrop quarterback Desmond Young. Army’s roster also includes running back Dominic Distefano from Hendrickson, defensive back Max Regan from Vandegrift, offensive lineman Holton Greenfield from Vandegrift and defensive lineman Jacob Covington from Liberty Hill.

The key game? Sept. 7, at Michigan. While games against Air Force and especially Navy always matter the most to the Army faithful, a win at the Big House in the second week of the season would immediately brand the Black Knights as a threat to crash the College Football Playoff.

No. 19: With Jarrett Stidham in the NFL, Auburn must choose a freshman quarterback

Coming tomorrow: Our No. 17 team

It’s our first Big 12 team in this year’s poll.