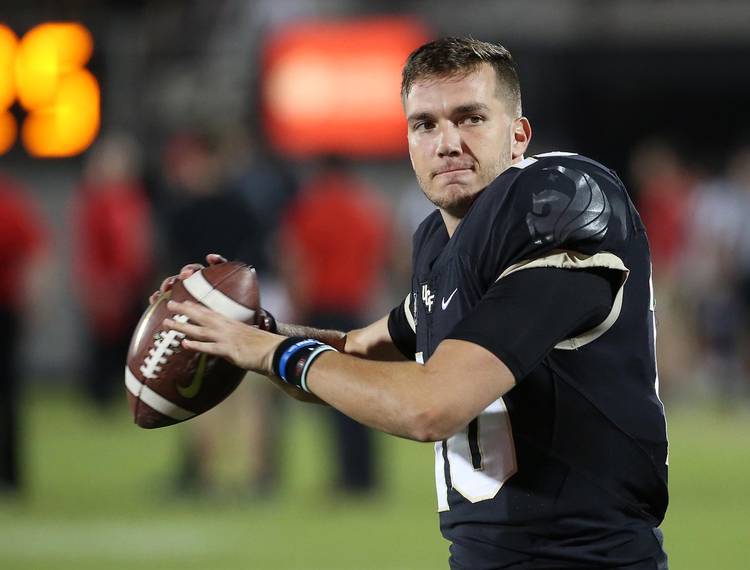 UCF quarterback McKenzie Milton warms up before action against Cincinnati at Spectrum Stadium in Orlando, Fla., on Saturday, Nov. 17, 2018. He's expected to miss the 2019 season while trying to come back from a serious injury. (Stephen M. Dowell/Orlando Sentinel/)

We’re 48 days away from the 2019 season opener, but it’s never too early to talk college football. We kick off our 11th annual countdown series of our preseason Top 25 as selected by the American-Statesman sports staff. Last year’s eventual CFP semifinalists ranked 1st, 2nd, 8th and 13th in our 2018 poll.

Our No. 16 team: Central Florida

The Knights’ best-case scenario: The Golden Knights overcome the likely absence of star quarterback McKenzie Milton, who suffered a devastating knee injury late last season, and Darriel Mack, who was Milton’s backup, and continue to make the case that they belong at college football’s grownups table.

Last year, Central Florida ranked 22nd in our preseason poll. During their 25-game streak, the Knights had three games canceled and never made up because of hurricanes — home games against Georgia Tech and Maine in 2017 (both Hurricane Irma) and at North Carolina in 2018 (Hurricane Florence).

Spring cleaning: Milton continued his rehab from a severe knee dislocation injury. Doctors had to do emergency surgery to make sure he didn’t lose his leg. He’s now trying to overcome nerve damage and is unlikely to play this season. … Central Florida athletic director Danny White, noting that Spectrum Stadium has been 99-percent full the past two home seasons, probably will soon be in need for significant expansion. He said it’s still difficult to get Power 5 teams to agree to play a home-and-home series against the Golden Knights. That became a national conversation earlier this year when Florida wanted a three-game deal, with two of the contests played in Gainesville, not Orlando. UCF gave an emphatic no to the offer.

Thank you, Bob Stoops: Josh Heupel is headed into his second year as head coach. He led the Knights to a 12-1 record after Scott Frost left for Nebraska. The Football Writers Association named Heupel its national rookie coach of the year. Heupel picked up another unique honor in the offseason that few coaches can top. He was nominated for the College Football Foundation’s Hall of Fame to honor his playing days at Oklahoma. Heupel, a standout quarterback, helped lead the Sooners to the 2000 national title. He also was on Bob Stoops’ staff at OU. But Stoops fired Heupel, then the offensive coordinator, after the 2014 season and replaced him with Lincoln Riley. Heupel said last season that in hindsight, being fired was one of the best turning points in his career. Heupel’s offense last season ranked fifth nationally.

Problems at quarterback: The Knights suffered a significant setback this week when quarterback Darriel Mack broke his ankle and is out indefinitely. Mack had filled in for Milton after Milton dislocated his knee. The team didn’t say how Mack broke his ankle, and there was no timetable provided other than Mack will miss August training camp. So the starter likely will be Brandon Wimbush, a senior graduate transfer from Notre Dame. He was the Fighting Irish’s starter in 2017 and the first four games of last fall. He’s a dual-threat guy who’s comfortable running the ball. He rushed for 804 yards two years ago. He left the Irish when he was benched in favor of Ian Book. The other scholarship quarterbacks on the roster are redshirt freshman Quadry Jones and freshman Dillon Gabriel.

Strong supporting cast: Central Florida sports a terrific supporting cast if it can find a quarterback who can be a good game manager. The offensive line returns three starters, including Jordan Johnson, who is making preseason All-American lists. The top tailback is Greg McCrae, who gained 1,182 yards last season. His 8.89 yards per carry were second best in the country. The team’s top four receivers from last season also return. Three of them caught at least 40 passes in 2018.

The key game? Sept. 14, Stanford. It’ll be the first of two straight games against Power 5 teams.

No. 17: Iowa State aims to keep its recent rise moving full steam ahead

Coming tomorrow: Our No. 15 team

This was the third-to-last school that Urban Meyer coached before he retired last year.