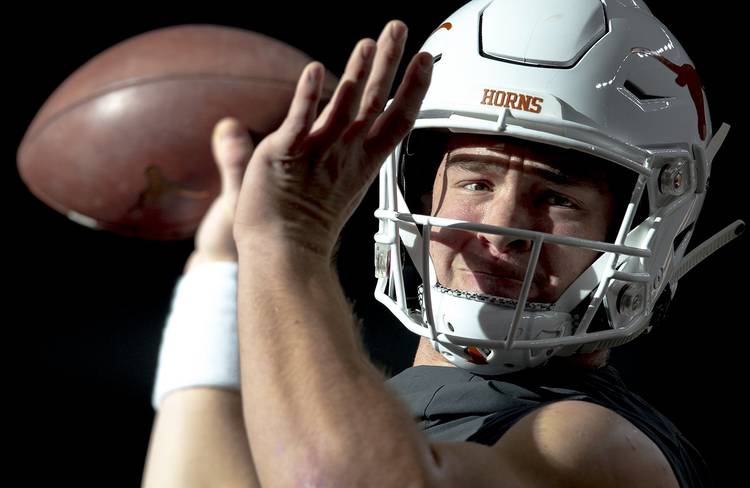 Baker Mayfield and Terry Bradshaw are not expected to attend Big 12 media days the next two days in Arlington. Or so we think. But gut instinct says they will figure prominently into the league’s annual preseason kickoff event.

After all, if bashing Texas is popular again, the Longhorns must be headed on the right track.

Oklahoma was picked to win the Big 12 championship again this season. No surprise there; the Sooners have won four straight league titles and will plug-and-play another Heisman-caliber quarterback in Jalen Hurts.

Texas was picked second, something that also was widely expected after the Horns’ 10-4 campaign in 2018. But somehow, UT quarterback Sam Ehlinger has become the No. 1 target of fan derision and ire from those not wearing burnt orange.

Mayfield didn’t say anything outrageous during his summer football camp at his alma mater, Lake Travis. North of the Red River, however, he went wild. “He doesn’t like me, and I hope he knows I don’t like him either,” Mayfield said of Ehlinger on an Oklahoma radio station.

Bradshaw jawboned himself into a frenzy while standing before a group of Louisiana Tech folks. Maybe his suspenders were too tight. Speaking of Ehlinger, the septuagenarian quipped, “He ain’t that good.” Texas opens the season against Louisiana Tech on Aug. 31.

Will Texas be that good in 2019? Will Hurts just automatically step in and lead the Sooners back to the College Football Playoff? What teams will emerge to give the front-runners fits? And who are these new coaches at Texas Tech and West Virginia?

There’s plenty to discuss Monday and Tuesday at Big 12 media days in Arlington. Here are five key questions that are sure to be hot topics:

1. Who gets credit for OU’s recent success: Lincoln Riley or his quarterbacks?

It’s easy to win championships when you have back-to-back Heisman Trophy winners. Mayfield guided OU to the mountaintop in 2017 while Kyler Murray did the trick last season. Now, Hurts steps into the huddle after a high-profile transfer from Alabama.

Riley is 24-4 the last two seasons after taking over for Bob Stoops. Last year’s team had a terrific offense but a woefully suspect defense. Can the Sooners keep winning long term without shoring things up on that side of the football?

2. Watch out for Iowa State? Really?

Iowa State was picked to finish third in the Big 12 preseason poll, and four Cyclones made the preseason All-Big 12 squad. The Des Moines Register calculated that was the most preseason accolades in school history, or “at least the best since the 1970s.”

All signs indicate this could be a breakout season for the local 11 in Ames. Coach Matt Campbell has posted consecutive 8-5 seasons. This year’s club has multiple top-flight players on the offensive and defensive lines, a key to any team’s success.

From die-hard Tech fans to the casual T-shirt wearers on game day, few in Lubbock were happy to see Kliff Kingsbury part ways with the Red Raiders. He was one of their own. But a 35-40 record in six years meant a change had to be made.

Enter Wells, a 45-year-old coach from Utah State. Tech athletic director Kirby Hocutt is coming off the best spring semester in school history, the Red Raiders having reached the men’s basketball championship game and won the national title in men’s track and field.

Hocutt is obsessed with turning the football program into a perennial winner. If Wells is looking for a short-term fix, he can figure out how Tech melted down late in games under Kingsbury. The Raiders could build leads, but they just couldn’t hold on to them.

4. Who will emerge from the chase group?

Oklahoma, Texas and Iowa State appear to be a clear-cut top three in the league. From that point down, it looks like everyone else is bunched up.

TCU is looking for a bounce-back season after going 7-6 last year under Gary Patterson. Oklahoma State will also be solid under Mike Gundy, but how good is the question. Baylor coach Matt Rhule flirted with an NFL job this offseason despite an 8-17 mark in Waco.

Tech and West Virginia, under new coach Neal Brown, are relative unknowns at the moment. Kansas State and Kansas were picked at the bottom of the league, although bet against Les Miles and the Jayhawks at your own risk.

From all appearances, the Texas-OU game at the Cotton Bowl in October will be a huge mid-season barometer. Then, it’s possible both teams could meet again at the Big 12 championship game. It’s up to everyone else to stop them from getting there.

From a conference standpoint, yes. Nobody is looking to leave at the moment, and frankly, there’s nobody out there that Big 12 officials are eager to allow in. So don’t expect much, if any, talk about conference realignment or league instability. It just isn’t there.

No conference changes will happen until the TV contracts come up for renewal midway through the 2020s.

The league’s biggest issue — if you want to call it a problem — is the inability to win the CFP. Alabama and Clemson have a virtual headlock on getting to the title game. Oklahoma has done its part in getting to the semifinals, but the Sooners were stopped at that point.

As things stand here in July, OU and Texas appear to have the best shot at getting to the CFP this season. That’s unlike the SEC where it feels like maybe a half-dozen teams can reach the final four, provided someone gets past Alabama. If the Big 12 can crack the CFP code, the league would look infinitely stronger.