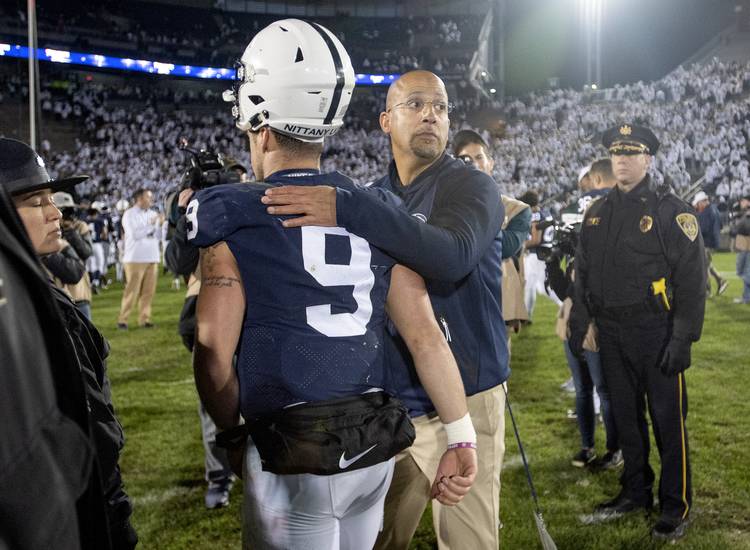 Penn State head coach James Franklin pats quarterback Trace McSorley (9) on the back as they walk off the field after 21-17 loss to Michigan State at Beaver Stadium in University Park, Pa., on Saturday, Oct. 13, 2018. (Abby Drey/Centre Daily Times/TNS)

We’re 46 days away from the 2019 season opener, but it’s never too early to talk college football. We continue with our 11th annual countdown series of our preseason Top 25 as selected by the American-Statesman sports staff. Last year’s eventual CFP semifinalists ranked first, second, eighth and 13th in our 2018 poll.

The Nittany Lions’ best-case scenario: Penn State coach James Franklin wants his program to be included in the yearly conversations for Big Ten contenders. He enters his seventh season rehabilitating the Penn State program with mixed results. It’s a hard ask when the East Division is shared with conference powers Ohio State, Michigan and Michigan State. A successful season is beating two of those three teams and competing for a berth in the conference title game behind a stout defense.

And their worst-case scenario: Worst case? Despite 12 returning starters, Penn State is a young team at key positions. Five players left early for the NFL draft. Another 11 entered the transfer portal. Franklin signed three consecutive top-15 recruiting classes, but that’s a lot of talent to replace with inexperience. A tough division in an improving conference could prove too much for a team replacing a three-year starter at quarterback and high-end talent on offense.

Facing the Big Three: Penn State is attempting to re-establish itself into the national landscape. Franklin did that on the recruiting trail. Now his program must do it on the field against its main rivals. Penn State went 0-3 against Ohio State, Michigan and Michigan State last season. Franklin can’t expect his program to take the next step until it beats the real powers of the East Division.

Is there a running game?: The best way to ease into a new chapter at quarterback is with a strong running game. McSorley provided that option, while leading rusher Miles Sanders is now gone at running back. Three starters do return along the offensive line. It’ll be up to Ricky Slade and freshman Noah Cain to provide balance for the offense.

Linebacker University: Penn State was once a factory for talented linebackers. Micah Parsons is reviving that legacy for the Nittany Lions. He led the team with 83 tackles last season, adding two forced fumbles. He’s flanked by a talented pair — Cam Brown and Jan Johnson.

The key game? Oct. 19, Michigan. Penn State should enter this contest at 6-0 and building momentum thanks to a soft early schedule. Michigan is the first true test. A home game gives Penn State a chance as this group grows up in the first half of the season. A win propels Penn State into conference title discussions. A loss could start an avalanche with MIchigan State and Ohio State waiting over the next month..

This school has won the Pac-12 in two of the last three years.