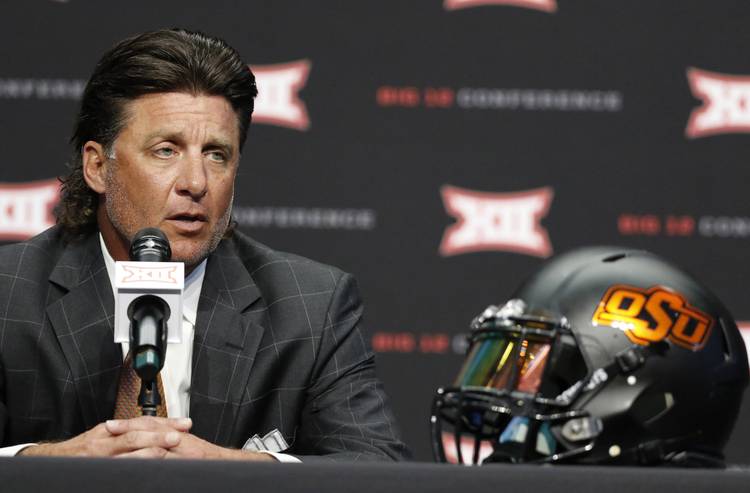 During last year’s Big 12 media days, Gundy broke the news that Taylor Cornelius would be his starting quarterback. The senior went on to throw for nearly 4,000 yards and 32 touchdowns. One of his standout performances was recorded in a 38-35 win over Texas.

One year later, Cornelius is gone and Gundy says he has an ongoing quarterback competition. Dru Brown, the one-time starter at Hawaii, and redshirt freshman Spencer Sanders are still vying for the starting gig. Gundy said they will split practice reps in August until one emerges as the clear-cut starter. The possibility of both playing in the team’s opener at Oregon State has not been ruled out.

Whoever wins the job will work with new offensive coordinator Sean Gleeson, who was lured away from Princeton in the offseason. Last year, Princeton went 10-0 and averaged a FCS-high 47.0 points per game.  Gleeson will run the same offense that Oklahoma State has been running; he’s made a good first impression in Stillwater.

Name game: As a cornerback in the Big 12, Oklahoma State senior A.J. Green has covered his share of talented receivers. On Monday, though, he had his eyes on a NFL star.

Green shares a name with a standout receiver for the Cincinnati Bengals. He said fans occasionally assume that he is the NFL star on social media platforms. Some have even said that they’d like to see a one-on-one battle between the Greens.

Could the 6-1, 190-pound Cowboys defender, who was a second-team all-conference pick in 2018, best the seven-time Pro Bowler? “I think I’d win that matchup,” Green said with a confident smile.

Lake Travis QB update: Matthew Baldwin, who transferred to TCU from Ohio State, still is one of six Horned Frogs quarterbacks in the mix for playing time, coach Gary Patterson said. But the former Lake Travis star has got to overcome several hurdles. TCU turned in a waiver to the NCAA last week to make the case that Baldwin should be eligible to play immediately.

Baldwin won’t be healthy enough to compete for a while. Patterson said he had a surgical procedure done on his knee. Baldwin is on crutches and isn’t expected to practice once preseason camp starts next month.

Williams, who was the league’s freshman of the year, was arrested in December after an 18-year-old woman claimed he’d punched her in the stomach and grabbed her by the throat. Williams entered a year-long diversion program in March, agreeing to have no contact with the woman, perform 40 hours of community service and complete an anger management course. He also must abstain from alcohol and drugs for a year. The school also placed the sophomore on probation until he graduates. He’ll have to meet monthly with a university conduct officer and complete a sexual violence accountability course.

“Violence will not be acceptable with women, period,” Kansas coach Les Miles said. “Action was taken immediately. We felt like a strong point was made, not only with Pooka but with the team. Pooka was going through a process for seven months. Pooka went through a legal investigation with the legal community and he also went through the proceeding with the conduct board with the university.”

Williams also will miss the season opener. Brooks, who rushed for more than 1,000 yards last season, was accused by a female student of domestic violence against her. She reported the allegations to the school, but not the police. The school cleared Brooks.

A show of hands: Big 12’s most dazzling stars could be a trio of wide receivers