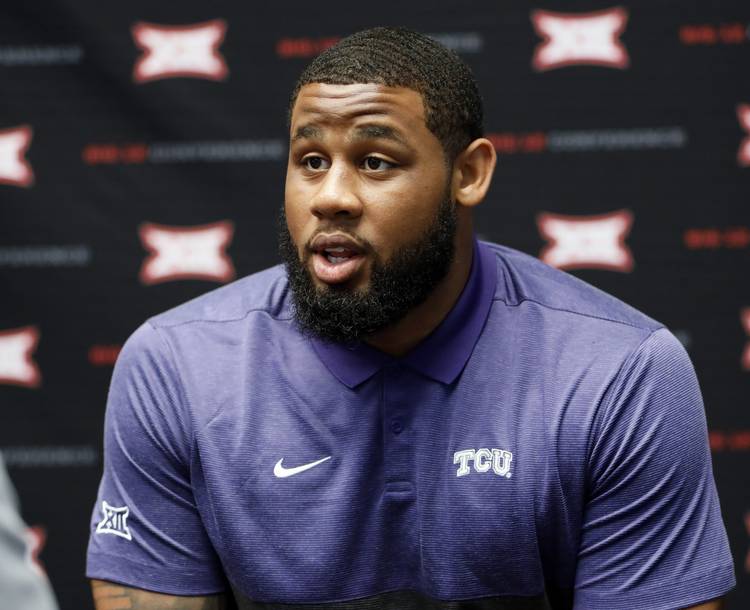 ARLINGTON — One of the players that TCU brought to Big 12 media days on Monday was making up for lost time.

TCU defensive tackle Ross Blacklock, who missed the 2018 season with an Achilles injury, started 14 times as a freshman in 2017. He had two sacks that season, including one that was recorded in a 24-7 win over Texas.

That takedown of Shane Buechele, though, may not be why Blacklock’s name sounds familiar to UT fans. He’s the son of Jimmy Blacklock, who was the second black letterman and first black star on the men’s basketball team at Texas. He was inducted into UT’s Hall of Honor in 2016.

On Monday, Blacklock chatted about his return to the field, his father’s UT legacy and who’s the Kawhi Leonard of TCU’s defense:

After sitting out last year, how ready are you for the season?

It’s definitely a good feeling. Unfortunately, the injury and everything — I see it as a blessing, though, and not something bad that happened. I took it as a way to level up my game mentally. It helped me a lot going through this process and I think I’m a better athlete even though I didn’t go through a season. I’m just ready; “ready” is an understatement.

What are the expectations for TCU in 2019?

Be the best team we can possible be.

Win each game and the big games will take care of themselves. If we’re meant to be here in December, we’re going to be here.

You lost two members from your defensive line to the NFL draft. How do you replace that talent?

Earlier, Gary Patterson said redshirt freshman Ochaun Mathis is somebody ‘nobody knows about.’ What’s to know about the Manor product?

He acts just like Kawhi (Leonard). He’s like a silent assassin. He’s a real good guy. He’s developed a lot better and a lot quicker. I’m really excited to see what he’s got to offer for this year (on the defensive line). He has a lot of shoes to fill, obviously, so I think that he can take the pressure.

What do you know about father’s legacy at Texas?

He paved the way for a lot of athletes, and I give all my respect to him. I’m not just saying that just because that’s my father. He does so much and he doesn’t really talk about it, I usually talk more about it than he does. He’s just inspiring to me. I try to do everything as hard as he works, I try to do everything to mirror him. He taught me how to play sports, he taught me everything, so he’s a great mentor, a great father.