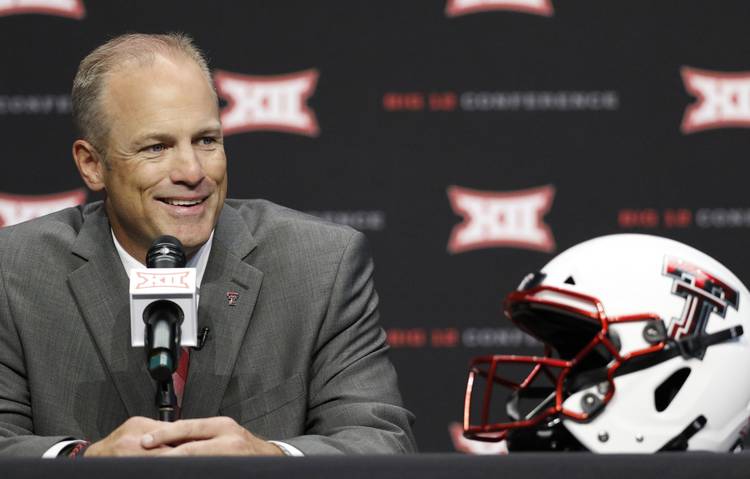 New Texas Tech head coach Matt Wells didn't want to be a dentist like his dad, but making the Red Raiders big winners could be like, uh, pulling teeth. (AP Photo/David Kent)

What else would you expect from someone who grew up listening to Bloomberg radio before middle school?

“It’s a lot to take in, but I was trying to get as much experience as possible,” said Bruffy, the 6-6, 300-pound tackle from Missouri City. “Seeing how they attack every single day is similar to how we approach football.”

Other than Bruffy, nobody in the Tech locker room cares about the Federal Reserve, the dot plot, a strong dollar or the crazy asset bubble in cryptocurrencies. “Bitcoin is fairy dust. What is the value of fairy dust?,” Bruffy said.

Everyone wearing scarlet and black sure knows the rising value of being a Red Raider.

New coach Matt Wells carried himself like a veteran during his first appearance at Big 12 media days on Monday at AT&T Stadium. Since his hiring from Utah State, Wells has watched the men’s basketball, baseball and track teams all reach incredible, championship heights.

“You can win in Lubbock,” Wells said.

Think back to how Tech basketball captured the state and nation’s attention in March. That feeling would only be magnified if the football program can break out of its sub-.500 ways.

Tech hasn’t enjoyed a double-digit winning season since 2008. Kliff Kingsbury was 35-40 the last six years before his exit. Now comes Wells, who had a 44-34 record the last six seasons at Utah State.

“At some point, you’ve got to get fed up with not being able to go out as a champion,” Washington said.

Fourth-quarter meltdowns and erratic quarterback play were Kingsbury’s undoing. Talented freshman Alan Bowman played eight games last season but missed the stretch run with a partially collapsed lung. When he went out, so did the air in Tech’s balloon.

“It fell apart because some people were so dependent on Alan being the starting quarterback,” defensive back Douglas Coleman III said. Washington and linebacker Jordyn Brooks agreed.

“He got hurt, and that kind of crushed some people’s spirits and whatnot,” Coleman said. “Then you look back and say, ‘Well, if he had played this game, we would have won.’ They were close games, even with our backup quarterback.”

Wells can’t play the what-if game, not when he’s got a fresh start with a healthy Bowman. “Full, completely cleared, healthy, went through all of spring,” the coach said. “I’m looking forward to coaching Alan these next three years.”

It’s not like the Red Raiders are a total rebuild. Tech had Texas on the ropes in the fourth quarter before Sam Ehlinger hit Lil’Jordan Humphrey for a dazzling 28-yard touchdown to seal UT’s 41-34 win. Cornerback Damarcus Fields returns this season while Humphrey has moved on to the NFL.

“We’ll probably beat Texas right now,” Coleman said with disgust. “It just goes back to technique. He lost vision of the ball. But as a DB, you’ve got to have short-term memory.”

Brooks is sure looking forward. Twice he’s led the Raiders in tackles. This new defense, he promises, is more attack driven and blitz friendly. The current players didn’t pick Wells, he said, but the coach picked them.

“It definitely feels different,” Brooks said. “It’s the same locker room, same walls, same food. But it’s new people, so it kind of feels like a fresh start. There’s nothing that was necessarily wrong, but I feel like a fresh start is good for everybody.”

Tech fans already have their Guns Up. They want to keep ’em up.

“We know that Lubbock and West Texas is crying to have a team they can support as passionately as they did for basketball,” Bruffy said. “We need to fill those shoes and do it.