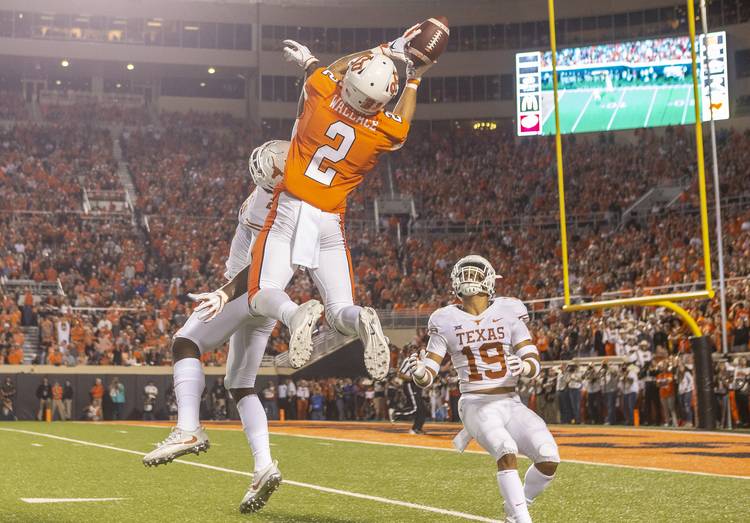 Oklahoma State wide receiver Tylan Wallace pulls down a touchdown over Texas defensive back Kris Boyd (2) and defensive back Brandon Jones (19) in the first half of a Big 12 Conference football game in Stillwater, Okla., Saturday, Oct. 27, 2018. [Stephen Spillman for Statesman]

ARLINGTON — There could be a lively debate that says the best returning players in the Big 12 are the guys who catch the ball.

Judging solely on production, Wallace is the top returning receiver in the country. He caught 86 passes a year ago for 1,491 yards and 12 touchdowns.

Lamb was the perfect complement to speedster Marquise Brown last season. While Brown’s big-play ability via play-action sucked away an extra cornerback, Lamb caught 65 passes for 1,158 yards and 11 touchdowns. He notched more than 100 yards in his final two games of the year — the Big 12 championship game win over Texas and the CFP semifinal loss to Alabama. He was a nice appetizer on the Sooners’ offensive buffet.

Then there’s Reagor, who managed 72 catches for 1,091 yards and nine touchdowns. He did all that as injuries decimated TCU’s top three quarterbacks.

“I feel like it was nothing,” Reagor said Monday during the first session of Big 12 media days at AT&T Stadium. “That was expected. That’s what I do for myself. I’m the type of guy I was brought up not to make excuses. You have to do with what you have.”

Here’s where the case of the receivers may falter: Their stats are contingent on their quarterbacks.

Wallace will be catching passes from a new quarterback. So will Lamb, who had the luxury of playing with the nation’s last two Heisman Trophy winners and No. 1 overall players in the NFL draft (Baker Montgomery and Kyler Murray).

Reagor says he’s cool with any of the six quarterbacks who are competing for the starting job at TCU.  He’s also fine with wherever coach Gary Patterson might play him. Against Oklahoma State last season, Reagor played receiver, running back and wildcat quarterback. He said he started his football career as a defensive back. Patterson joked that he may play him eventually on defense, noting he’d be drafted higher as a cornerback.

“He’s the best backpedaler on the team,” Patterson said.

Wallace said he’s not that concerned about improving his stats.  This time a year ago he was an afterthought in a Big 12 conversation. He finished it as a finalist for the Biletnikoff Award as the nation’s top receiver.

Lamb also isn’t worried about numbers. He knows he’s without Murray and Brown. OU’s likely quarterback is Jalen Hurts, a big-name guy who transferred from Alabama. Lamb sees his primary role, for now, tutoring the Sooners’ younger receivers.  The stars of coach Lincoln Riley’s last recruiting class were those who catch passes, including a pair of five-star prospects.

“My role really has increased a lot,” Lamb said. “I’m holding up my end of the bargain. I’ve got to help my younger brothers hold up their end. … I’m ready to go to war with them.”