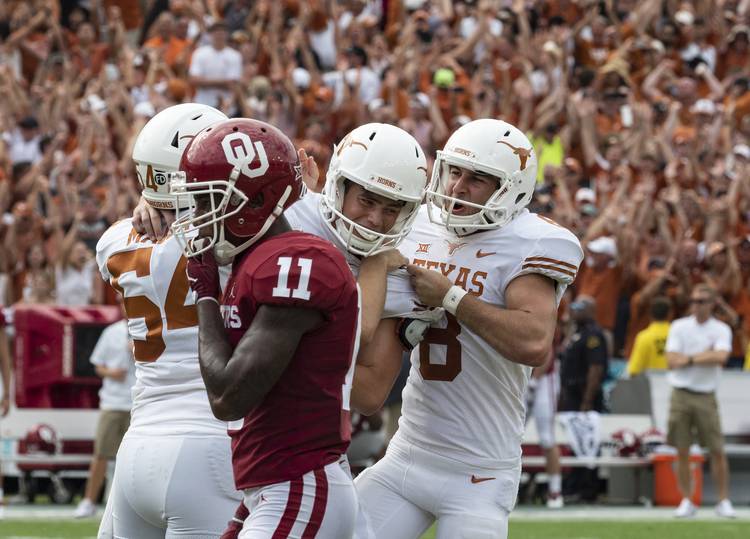 ARLINGTON — Bob Bowlsby was the captain of the wrestling team his senior year at Minnesota State. When grappling with the future of television contracts, the Big 12 commissioner finds there are no easy pins.

Bowlsby was eager Monday to highlight the league’s new TV partnership on the opening day of Big 12 media days. “Big 12 Now” will debut this fall on ESPN+, an online streaming service that costs $4.99 per month or $49.99 annually.

“When I was a wrestler, I liked people to come after me. That allowed me to counter. But I could scramble when I needed to,” Bowlsby said. “The media environment is a scramble environment.”

It’s essentially a work-around for the league that’s long wanted its own television network. But the conference previously granted its third-tier TV rights to the schools. Thus, Texas created Longhorn Network and Oklahoma partnered with Fox Sports. The remaining eight schools were left on their own.

How lucrative are third-tier TV rights? Bowlsby said Monday the financial considerations range from “about a million dollars a school to something between $15-20 million dollars at the University of Texas.”

Texas and Oklahoma will be on ESPN+, although it’s unclear how much the Longhorns and Sooners will appear.

Both Texas and OU games will be eligible for ESPN+ whenever they are the road team in various Big 12 contests. It’s unlikely that any Longhorns football game will appear on ESPN+ given the team’s ratings draw. But men’s and women’s basketball, volleyball and smaller sports could be candidates going forward.

Longhorn Network will still be the primary home for UT home volleyball, basketball and baseball games. ESPN is contractually obligated to show 200 UT events per year on LHN.

“Some of what we previously had on ESPNews and ESPNU will likely migrate to Big 12 Network,” Bowlsby said.

Nick Dawson, ESPN vice president of programming and acquisitions, complimented the league for going with an online model.

“This is really a conference taking a step toward where we all believe the future is going,” Dawson said. “I commend them for that, because I think some people can look at this as risky or the non-traditional path to follow.”

The future is hazy for college officials and TV executives. Traditional cable fees paid the bills for decades, and that’s what the Big 12 is currently using as a primary revenue model. But every Power 5 conference TV contract comes up for renewal midway through the 2020s.

Bowlsby said anyone who tells you what’s going to happen with TV viewing in three to five years is “delusional.” Cord-cutters are leaving cable in droves. It’s unclear if streaming will become the primary method of TV sports delivery or something totally different. Thus, no one can bank on long-term TV revenue.

“I am a planner by nature, but this is area where you really can’t do a lot of planning,” Bowlsby said. “It’s gotten me out of my comfort zone and gotten our staff out of their comfort zone a little bit to be more responsive.”