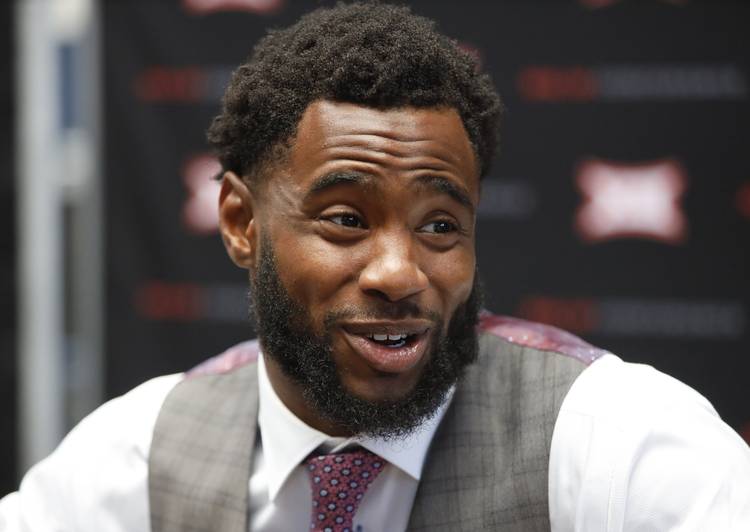 ARLINGTON — A lot has changed for West Virginia since it wrapped up its 2018 football season in the Camping World Bowl.

Neal Brown was hired to coach the Mountaineers after Dana Holgorsen departed for Houston. All-conference quarterback Will Grier is now a Carolina Panther. West Virginia’s four leaders in receiving yards from last season also are now in the NFL. Additionally, West Virginia’s personnel and scheme on defense will look different in 2019.

Junior receiver T.J. Simmons, who had 28 receptions last year, also has experienced changes off the field. His daughter, Leilani, was born on Sunday. On Tuesday, Simmons chatted about fatherhood, a new era in Morgantown and the Horns Down celebration.

You became a father this week. How is your baby doing?

Everything is going good; she’s doing well. I keep getting pictures every hour, keep asking for updates and stuff like that. Can’t wait to get home to go see her.

How do you think fatherhood is going to change you?

I know I’m going to get a little lack of sleep. Other than that, it’s just going to make me focus. It’s going to keep me grounded a little bit. Last season, I would go out and celebrate a win. Now I think this season after a win, I’ll probably just take it home and just chill and chill with her. (It will) help me stay focused on what’s the mission ahead.

What should fans expect in Morgantown?

It looks similar to a Dana Holgorsen offense. It’s fast-paced, a lot of throwing it around and involving the run game and the running backs.

Austin’s a great player. He has a lot of savviness to him, he can more around a little bit. I think he ends up gelling well with the team, he fits perfectly.

You started your career at Alabama. What did you learn while playing there?

Just learned how to stay calm in big games, learn how to take this as a business. You’ve got to get in, you’ve got yo watch your film, you’ve got to take notes, you’ve got to be where you’ve got to be on time. I learned a lot from a lot of guys who went first, second, third round from Alabama, still have great connections with them. They just taught me how to be a professional.

Were you surprised that West Virginia’s “Horns Down” celebrations last year became a big deal?

I was surprised about it. I didn’t think it was a big deal myself. After they made it a penalty, we had to take it a lot (more) serious just because it was official. A year later, I’m not too much thinking about it, just ready to get back to play Texas again because that was a great game.

Want to know why Iowa State is a Big 12 contender? Check out the offensive line