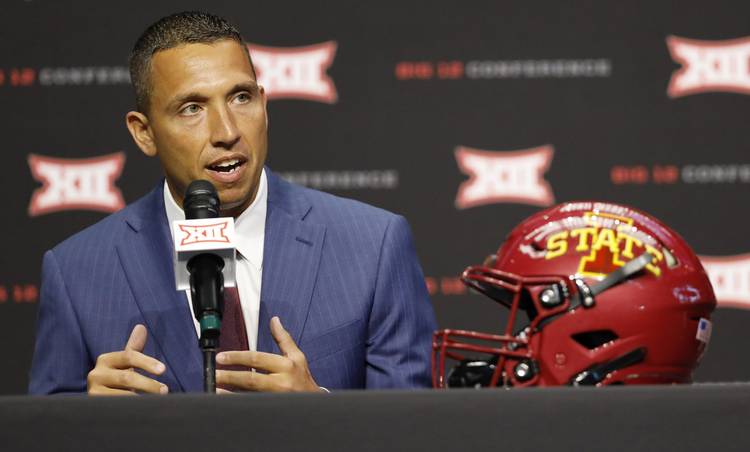 ARLINGTON — The top two Big 12 teams in the preseason media poll are Oklahoma and Texas.

Makes sense. The Sooners seemingly are always winning the title. The Longhorns, after a 10-4 year and a Sugar Bowl victory, are trying to return to their spot as conference royalty. Those two teams played each other in last year’s Big 12 title game. There’s nothing controversial about those choices in July.

But the third spot is surprising. It’s the Iowa State Cyclones, the team that needs to find a replacement for its leading rusher and best player, tailback David Montgomery, and big-play receiver Hakeem Butler.

But take a step back. Maybe the reason why the Cyclones are so valued, at least in preseason, is the fact that Matt Campbell’s squad features a solid, cohesive offensive line and a defense that’s considered the Big 12’s best.

It’s the line, with its five returning starters, that might be Campbell’s proudest project. It’s because it was the coach’s most significant issue when he was hired to coach the Cyclones back in 2015 on his 36th birthday. He didn’t even have a single scholarship tight end to help with blocking.

“To be honest with you, that has been an Achilles heel as we continued to build our program,” Campbell said. “It was probably the farthest away (as a unit) when we got to Iowa State in terms of rebuilding. I have always said there is no shortcut to rebuilding an offensive line. We’re going to have to do it the hard way.”

Montgomery was considered the offensive workhorse the past two years. He gained 2,362 yards and averaged more than 100 yards per game in 2017 and 2018. Montgomery, a lightly-regarded recruit out of high school, left school early for the NFL draft and was selected with the 73rd overall pick by the Chicago Bears.

Campbell said Tuesday he had five possibilities to replace Montgomery.

Here are five reasons why there might not be a decline in rushing production:

•  Senior Collin Olson, who played defensive line until spring of 2018, returns at left guard. He started the final 11 games at guard last fall.

•  Colin Newell, a sophomore and the baby of the bunch, started the final 12 games at center last fall after impressing coaches on the scout team in 2017.

As any head coach, they consider cohesion the best attribute of an offensive line.

The line also will continue to offer comfortable security for quarterback Brock Purdy, who earned the starting job last October as a freshman.

The depth chart Iowa State issued for media days featured five running backs for the first-team spot. Sheldon Croney was listed first, but it wasn’t much of a clue — the returning tailbacks are listed in alphabetic order, then came the two freshmen.

Croney, a senior, is the most experienced. But he gained only 56 yards last season. Johnnie Lang, a sophomore, enjoyed one start last season. He has 84 rushing yards in his career.

Campbell doesn’t anticipate figuring out a starter until the end of preseason camp.

The offensive line gives him the luxury of time.