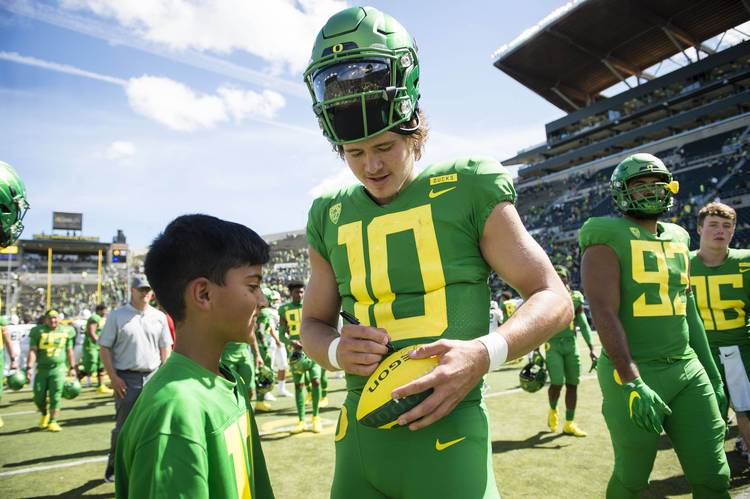 Oregon quarterback Justin Herbert (10) signs a football for a fan after a game against Portland State at Autzen Stadium on Sep 8, 2018. The Ducks won 62-14. [Troy Wayrynen/USA TODAY]

We’re 40 days away from the 2019 season opener, but it’s never too early to talk college football. We continue with our 11th annual countdown series of our preseason Top 25 as selected by the American-Statesman sports staff. Last year’s eventual CFP semifinalists ranked first, second, eighth and 13th in our 2018 poll.

The Ducks’ best-case scenario: After booking trips to New York for the Heisman Trophy ceremony and Las Vegas for an appearance at the 2020 NFL draft, Justin Herbert ends up as beloved in Eugene as Joey Harrington and Marcus Mariota. College GameDay will be at Oregon-Auburn in Arlington on opening weekend, so the Ducks will be provided with an early showcase as they hunt for their first conference crown since 2014.

And their worst-case scenario: Worst case? Oregon could be in trouble if Herbert’s Heisman hopes are DOA by midseason. Then there are the questions about the defense. In the span of three seasons, Oregon went from allowing 41.4 to 25.4 points per game. But with a new defensive coordinator adjusting to his first real Power 5 job, is regression or continued progression in the cards?

Last year, Oregon was 23rd on our preseason poll.

Quack attack is back: Herbert, coming off a 3,151-yard junior season, is 18-10 as a starter and his run of 28 straight games with a touchdown pass is the nation’s longest active streak. He needs 3,727 yards to overtake Mariota as Oregon’s all-time leading passer, and he’ll face only two teams that boasted a top-50 passing defense in 2018.

Impact freshman: Oregon added 11 four-star recruits thanks to a 2019 signing class that ranked seventh nationally. Then there was five-star defensive lineman Kayvon Thibodeaux, who 247Sports rated as the nation’s second-best overall prospect (ESPN had him at No. 1). Thibodeaux is the highest-rated recruit to ever sign with Oregon; the 6-5, 240-pounder enrolled early and was responsible for a sack in the spring game.

The key game? Oct. 19, at Washington. The first half of the schedule is mixed with gimme games (Nevada, Montana, Colorado) and tougher tests (Auburn, Stanford, Cal), but keep an eye on the two-game stretch against their rivals from the state of Washington. First up is Washington, which has won two of the last three Pac-12 titles. Washington blew out Oregon in 2016 (70-21) and 2017 (38-3), but the Ducks found revenge in overtime last year.