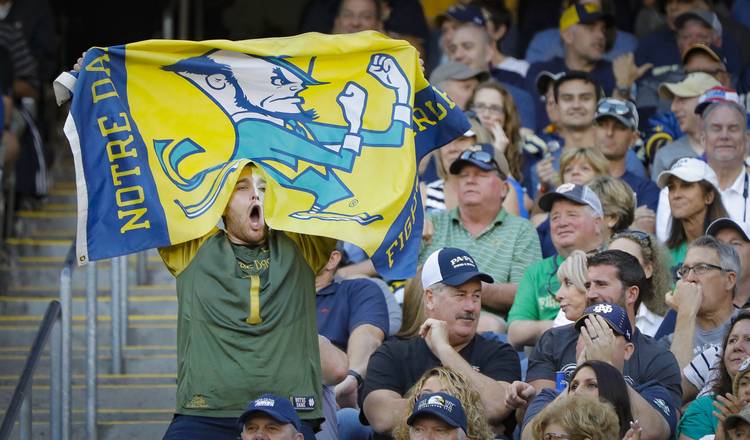 A Notre Dame fan waves his Fighting Irish flag as he is energized during the game against Navy at SDCCU Stadium in San Diego on Oct. 27, 2018. Notre Dame won, 44-22. (Howard Lipin/San Diego Union-Tribune)

We’re 39 days away from the 2019 season opener, but it’s never too early to talk college football. We continue with our 11th annual countdown series of our preseason Top 25 as selected by the American-Statesman sports staff. Last year’s eventual CFP semifinalists ranked first, second, eighth and 13th in our 2018 poll.

The Fighting Irish’s best-case scenario: For the Fighting Irish to reach double-digit victories for the fourth time in five years, they’ll have to fight through a suffocating schedule. With QB Ian Book in the fold — combined with one of the country’s best offensive lines — this group could contend for another run through the college football playoffs and a national championship.

And their worst-case scenario: Worst case? With the loss of kicker Justin Yoon and six players who were taken in the NFL draft, this season could be a disappointment if their backups don’t live up to expectations. Nevertheless, Notre Dame should do no worse than 9-3 with a bid to a high-level bowl game such as the Outback, Gator or Citrus.

Last year, Notre Dame was 13th on our preseason poll.

Inside the Fighting Irish

2018:  12-1 (lost to Clemson in the CFP semifinals). Kelly is the fifth coach to last 10 years or more at Notre Dame. The other four (Knute Rockne, Frank Leahy, Ara Parseghian and Lou Holtz) won national championships.

Spring cleaning: Highly touted QB Brandon Wimbush transferred to Central Florida, where he’s now in line to be the Knights’ opening-game starter. … Notre Dame will rely on two players who are in their fifth year with the team, including Asmar Bilal, who moves from outside to inside linebacker. They are also counting on nickel back Shaun Crawford, who returned to spring camp after suffering his third season-ending injury last year. … Lance Taylor, previously a running backs coach at Stanford who mentored Heisman Trophy runner-up Christian McCaffrey and recruited another in Bryce Love, has been hired as the team’s RBs coach.

Book is back: If Notre Dame has a Heisman candidate, it’s Book, who became the starter during the fourth game last year. His numbers tell an impressive story — 19 TD passes, a 70.4 completion percentage and an average of 219 yards passing a game. He looked in midseason form when he went 16-for-21 for 220 yards and a pair of touchdowns in the spring game.

Strength in numbers: The strength of the defense is its stock of pass-rushing defensive ends, led by seniors Daelin Hayes (42 tackles, 4.5 sacks), Julian Okwara (38 tackles, 8 sacks, 21 QB hurries) and Khalid Kareem (31 tackles, 2 sacks). Two others could start for most Power 5 conference teams.

Hello, ACC: For the record, Notre Dame is not in the Atlantic Coast Conference, but one might not be able to tell by looking at the schedule. The season opens with Louisville. The Irish can look forward to Virginia in September and Virginia Tech and Boston College in November. Last year they played five games against ACC teams, then played a sixth when the faced Clemson in the CFP semifinals.

The key game? Sept. 12, at Georgia. Both teams have CFP aspirations this season. With a win here early in the season, Notre Dame’s chances improve exponentially with a road game at Michigan in late October being the other big challenge on the schedule.

Coming tomorrow: Our No. 6 team

This school is (a) on Texas’ schedule, (b) produced three 2019 NFL draft picks and (c) is coached by a former player from the same school.