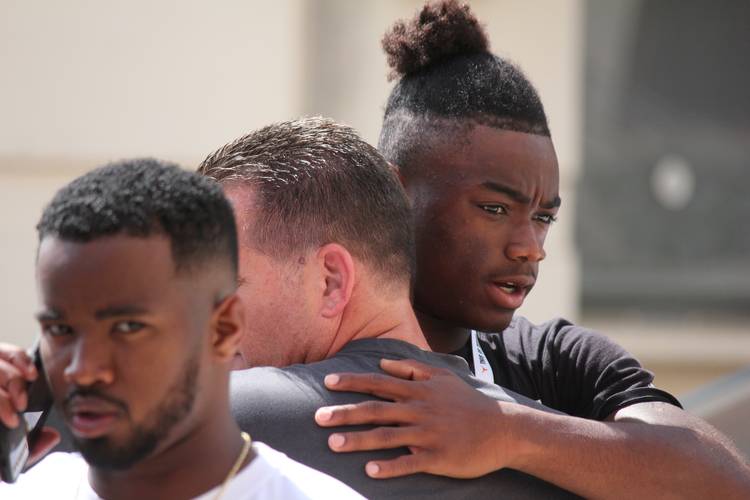 Tom Herman continued his tradition of nabbing his quarterback prospect a year before the start of their junior season when Katy Tompkins four-star Jalen Milroe picked the Longhorns on Sunday.  Roschon Johnson and Hudson Card committed the summer before their junior seasons. Milroe becomes the third member of the 2021 class, joining wide receiver Quay Davis and tight end Lake McRee. Milroe is a 6-1.5, 194-pounder who is the third-ranked dual-threat quarterback in the 2021 cycle.

“Texas was one of the schools that communicated with me the most since my freshman year,” Milroe said. “When I sat down with my family, we believed that they were the most consistent, and they made me feel like my future on and off the field was a priority for them.”

Milroe amassed an impressive early offer list with Alabama, Florida, and Texas A&M among his 19 offers. He passed for 1,420 yards and 10 touchdowns to just four interceptions on only 174 passing attempts. Milroe added 609 yards and 10 touchdowns on the ground and was named the District 19-6A Newcomer of the Year as a sophomore. He led a Katy Tompkins program with five varsity wins prior to 2018 to the playoffs as a sophomore.

“Other schools told me similar things about my fit into their program, but I honestly felt that the Texas staff was more genuine,” he said.”

Skill set: Milroe is among the best dual-threat quarterbacks in the country. He’s a big, powerful quarterback in the pocket with elite speed and a powerful arm. He’s a pass-first quarterback with a bruising running style, never shying from contact once he reaches the second level. Milroe does a great job buying time and finding vertical routes. He’s also athletic enough to use in the designed run game.

Milroe is still raw. He hasn’t started his junior season and he doesn’t play in a quarterback factory school built around passing like Texas commit Hudson Card in the 2020 class. His accuracy and consistency will improve as he learns the proper footwork. Milroe is an elite prospect with a chance to rank as the state’s best quarterback in Texas for the 2021 cycle. He’s a national top-100 prospect who Texas can build around in the 2021 class.

Immediate impact: It’s become impossible to predict the depth chart at quarterback with the transfer portal looming in every offseason. Quarterback is a unique position because it rarely rotates. It isn’t fun being a backup quarterback, which leads to transfers. Texas holds commitments from Card and Ja’Quinden Jackson in the 2020 class. Sam Ehlinger will be gone when Milroe arrives, leaving the 2020 class to compete with Roschon Johnson and Casey Thompson, if all four are still around in 2021.

Fitting into the program: Milroe is the ideal fit for Texas at quarterback. He’s mobile enough to lean on in the running game, and big enough to carry a workload like the one placed on Ehlinger. Milroe also possesses a powerful arm that gives him incredible upside if he learns how to harness his accuracy. Milroe is another Houston-area prospect heading to Texas, and he’s the type of leader who can help the Longhorns draw other recruits to Austin.

Recruiting at the position: It’s unlikely that Texas signs two quarterbacks in 2021 unless someone transfers between now and next football season. That could change if Jackson ends up playing a position other than quarterback. Preston Stone of Parish Episcopal is another Texan with heavy interest from the Longhorns. He’s a five-star who is ranked as the best dual-threat in the 2021 cycle.