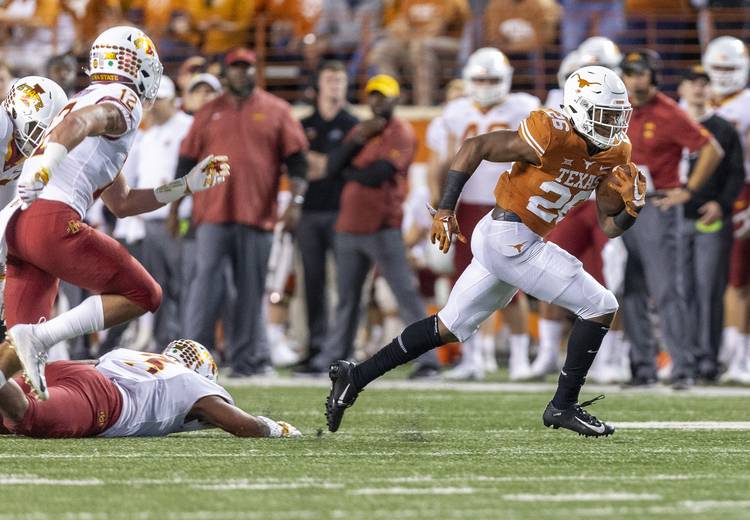 Texas running back Keaontay Ingram (26) breaks free of a tackle by Iowa State defensive end JaQuan Bailey (3) and defensive back Greg Eisworth (12) for a first down in the first half of a Big 12 Conference football game at Royal-Memorial Stadium, Saturday, Nov. 17, 2018. [Stephen Spillman for Statesman]

Say it correctly with the hard G or botch it with the soft g, who cares? The Texas quarterback, who drew a bigger crowd than head coach Tom Herman at last week’s Big 12 media days, is on everyone’s mind, even rivals.

On Monday, Texas running backs coach Stan Drayton spoke highly of the Longhorns’ talented cover boy and then gnashed his teeth. “I’m going to be honest with you,” Drayton said. “Tom knows me, so I don’t have a problem saying this. I am a competitive running back coach. We are trying to take over this run game.”

The Texas running game will be better in 2019, Drayton believes. And it won’t be solely because of the hard-charging, electric Ehlinger.

“We’d be probably the dumbest coaches in America if we stop running our quarterback,” Drayton said. “We’re not going to do that. But we need to balance all his touches and how much he’s getting hit. We have some legit, legit talent in that running back room that can take that (pressure) off our quarterback.”

Drayton, who tutored NFL stars Brian Westbrook and Ezekiel Elliott, isn’t exactly pleased that UT finished eighth in Big 12 rushing yards per game last season (153.1). Even worse, it still sits in his craw that a quarterback — not one of his running backs, but Ehlinger — led Texas in rushing in 2017. Ehlinger’s grand rushing total in nine games that year: 381 yards.

“But no, as a running back, those guys are prideful dudes,” he continued. “They’re prideful dudes and want the ball in their hands just like everybody else. Their call to duty is they want to feel like it’s important, you know? When they sit there and look down the line, they see the NFL trying to devalue that position. They feel like they’re the drum majors of the offense, man.”

Drayton said running backs have egos, and you have to manage the situation.

“But yeah, for them to stay on that edge, I’ve got to stay on that edge about it,” Drayton said. “It’s great motivation to come in here and say, ‘Hey, the quarterback led the team in rushing. What are we doing in here? How are we going to change it?’”

The Texas running back room hasn’t been a utopian society the last two seasons. In Drayton’s defense, there wasn’t a capable, every-down threat at his disposal in 2017.

The big bruiser Chris Warren III wasn’t dynamic enough, so much so that coaches wouldn’t use him on the goal line in double-overtime at USC. He ultimately got moved to tight end. Kyle Porter’s downhill running style, which was terrific at Katy, didn’t translate to the Big 12. Toneil Carter fumbled too much for Herman’s liking. All left UT early.

Before last season, coaches hit the graduate transfer market hard to land senior Tre Watson from California. He ended up being quite serviceable paired with freshman Keaontay Ingram. Daniel Young, who started the last five games in 2017, was the third option.

Still, the combined numbers from the running backs were not eye-popping. Watson and Ingram combined for 1,494 yards and averaged 4.6 yards per carry. By comparison, Oklahoma almost had two 1,000-yard rushers. Kennedy Brooks had 1,056, and Trey Sermon had 947. Heisman Trophy-winning quarterback Kyler Murray had 1,001 rushing yards.

If there was to be progress at UT, it had to come in the weight room. At Big 12 media days, Herman said Ingram has added “15, 20 pounds of, you know, what we call armor.” The coaches truly didn’t think Ingram could handle 20-25 carries per game last season weighing at or slightly below 200 pounds. He’s listed at 220 pounds in the 2019 media guide.

All indications suggest Ingram is the starter, or at least a co-starter, for this season.

Texas signed Derrian Brown, a 5-10 running back from Buford, Ga., as part of the 2019 recruiting class. But Brown won’t play this season after a rather horrific medical scare. Doctors found a blood clot in his brain. He required several surgeries and ended up graduating high school. His long-term athletic future is unclear at best.

It was thought Whittington might play defense, or at wide receiver. Not after he dazzled just about everyone during spring drills. He was all-everything in high school and rushed for 846 yards and scored 14 touchdowns as a senior. Whittington was both the offensive and defensive MVPs in the Class 4A Division II title game.

“If you were in our room and our practice field and watched him play running back, I gave up on him,” Orlando said. “That guy …”

Drayton conceded Monday that Ingram, Whittington and Young are three top contenders. A fourth name to watch is fifth-year senior Kirk Johnson, who has battled a lengthy list of injuries. “No one’s heard that name come up in a long time,” Drayton said.

Realistically, only two running backs will play on any given Saturday, especially considering how Ehlinger acts as a third runner with his style. There simply aren’t enough plays for a third back to get many chances. Coaches must also factor in passing plays to activate Collin Johnson, Devin Duvernay, the tight ends, etc.

Texas coaches also spent the offseason focused on more big plays. The Horns were the only Power 5 team without an offensive play longer than 50 yards or more last season.

When Herman arrived in 2017, he was downtrodden because if the play was blocked for 4 yards, the running backs might get 2. Last year, a 4-yard play might get 4 yards. Now, he hopes a play blocked for 4 yards gets that and more. And for plays designed for 8 yards “can go the distance,” Herman said.

“Have we made it a point of emphasis?” Drayton said of UT’s lack of big plays. “Yes we have.”

For the first time in Herman’s tenure, UT finally has multiple dynamic threats in the backfield. It could make all the difference in the world on the scoreboard.

“Super excited for this season on the Forty Acres,” Drayton said, “no doubt about it.”