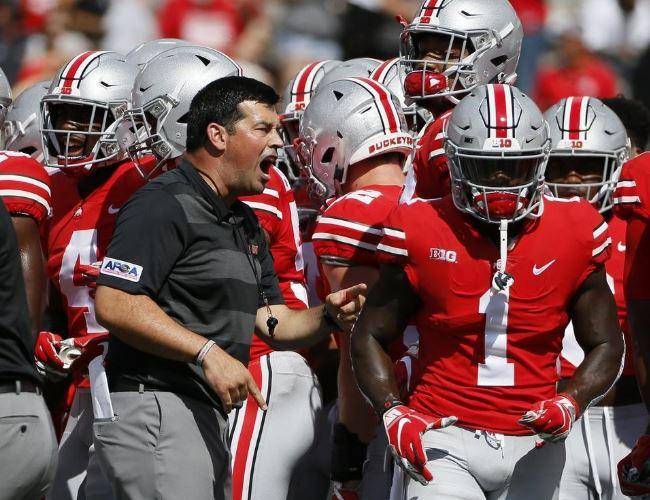 Ohio State just about has it all this season: A rising head coach in Jason Day, a supportive athletic director, a quarterback who may be the best player in the country and NFL-quality players on both sides of the ball again. But what the Buckeyes don't have: A season to play. The Big Ten has canceled football for this fall. (Adam Cairns/Columbus Dispatch)

We’re 37 days away from the 2019 season opener, but it’s never too early to talk college football. We continue with our 11th annual countdown series of our preseason Top 25 as selected by the American-Statesman sports staff. Last year’s eventual CFP semifinalists ranked first, second, eighth and 13th in our 2018 poll.

The Buckeyes’ best-case scenario:  First-year head coach Ryan Day picks up right where Urban Meyer left off and leads Ohio State to another Big Ten championship and a berth in the College Football Playoff. The Buckeyes are the class of the conference and remain that in 2019 behind an energized coaching staff. Georgia quarterback transfer Justin Fields proves why he was a five-star recruit and Ohio State becomes a threat to win the national championship.

And their worst-case scenario: Worst case? Moving into a new era isn’t always easy, even for blue-blood programs — Michigan wins the conference and recruiting momentum slows for the Buckeyes. Meyer was undeniably a successful coach no matter what your personal feelings about him may be. Day isn’t walking into a ready-made situation to run the gauntlet and compete with a championship with an unproven quarterback at his second destination.

Last year, Ohio State was No. 3 on our preseason poll.

Spring cleaning: The defense should return to glory after a down year in 2018 that was plagued by injury to star defensive end Nick Bosa. The Buckeyes return every defensive starter except for Kendall Sheffield and fellow defensive lineman Dre’Mont Jones. Ohio State expects big seasons from Chase Young and Jonathan Cooper on the edge, while Davon Hamilton could break out at nose guard.

DBU-worthy: Ohio State has staked a claim for the title of Defensive Back University in recent years and the 2019 bunch is filled with potential NFL stars despite the loss of Sheffield. Safety Jordan Fuller returns after leading the team in tackles in 2018. Cornerbacks Jeffery Okuda, a former Texan, and Damon Arnette are young NFL prospects.

The Dobbins show: It’s now Dobbins’ running game with the loss of Mike Weber, whom the former La Grange star split carries with during his first two seasons. Dobbins burst onto the scene as a freshman. He’ll be tasked with establishing a consistent running game along with the mobility of Fields at the quarterback position.

The elephant in the locker room: Meyer was a pillar of college football — he won at Utah, then won more at Florida, then the same at Ohio State. Day is in no way walking into a car crash, but it isn’t easy to win conference championships and dominate your top rival on a yearly basis. The expectations are insanely high for Day. Early struggles could begin chatter about his readiness to lead a program the size of Ohio State.

The key game? Nov. 30, at Michigan. Arguably the biggest rivalry in college football is always the most important game on the schedule for Ohio State and Michigan. Both coaches enter 2019 with something to prove. A win for either Day or Jim Harbaugh draws first blood in the new rivalry. A win for Ohio State could put the nail in Harbaugh’s tenure at Michigan.

Coming tomorrow: Our No. 4 team

This school’s quarterback is a Texan who has gone 26-2 as a starter.