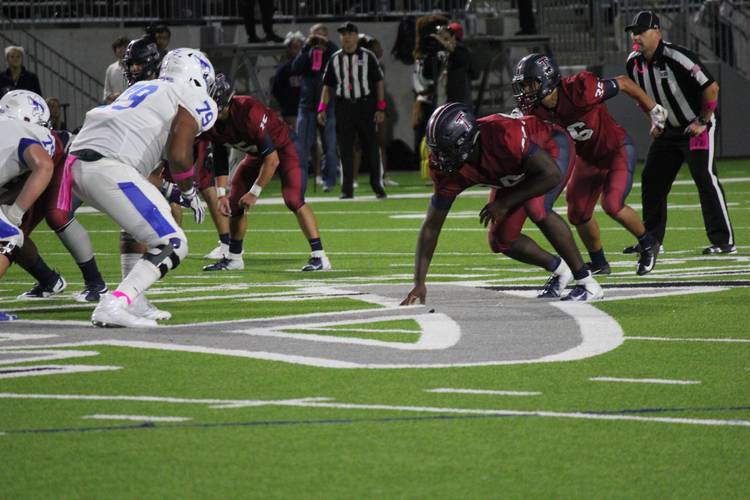 Texas’ quick start in the 2021 class consists of four offensive prospects in quarterback Jalen Milroe, wide receiver Quay Davis, offensive lineman Hayden Conner and tight end Lake McRee. The first six members of the 2020 class were also offensive prospects. The 2020 group is starting to balance out, and 2021 is likely to do the same before the start of the season.

Here are 10 in-state priority defensive targets for the Longhorns for 2021.

Jackson is a long-time target of the Texas staff. The four-star is the top pass rusher in the state for 2021. He’s a giant with room to add 30 pounds to his frame and play anywhere on the line. Texas likes oversized ends and Jackson is the ideal candidate to flourish in Todd Orlando’s preferred odd-man front.

The competition will be fierce for him, but the Longhorns are in good shape early. He’ll be a four-year starter by the time he graduates, though he missed a bulk of his sophomore season with an ACL injury.

Expect LSU and Texas to battle it out for this Port Arthur product. Thomas was a second-team all-district performer as a sophomore, registering 32 tackles and five sacks. He’s still a raw prospect learning the position with his best football in front of him. He’s a physical freak at his size. He’s strong enough to hold the edge and athletic enough to become a consistent pass rusher once he irons out technique.

The Longhorns moved up Adeleye’s list of schools when Milroe committed to Texas. The two are teammates and have known each other since youth league football. That team also consisted of Hayden and fellow UT offensive line target Bryce Foster. Adeleye is another big-bodied defensive end who can move up and down the line of scrimmage because of his combination of size and strength. It’s hard to imagine him not following his friends to Austin if Texas can convince him of the upsides to its defensive scheme.

Burris is a high-potential defensive lineman who could grow into the best defensive tackle in Texas for the 2021 cycle. He’s teammates with Jackson, and the two form one of the best defensive lines in all of Texas high school football. Burris dominated with Jackson out injured, elevating his stock toward the end of a great sophomore season. Landing Jackson and Burris would be a major win for the Longhorns.

Texas is adding a DFW flavor to the program in the 2020 class after signing only four prospects from that area in the previous two cycles. Herman and his staff know Dallas is key to long-term success. Turner is a DFW prospect close with some of those DFW commits headed to Austin. He’s yet another big-bodied end with the potential to slide inside depending on his body development.

The Longhorns hope Duncanville is a pipeline school. It landed the commitment of four-star quarterback Ja’Quinden Jackson. Texas is favored to gain a commitment from Duncanville safety Chris Thompson Jr. on Aug. 1. The Longhorns are also chasing 2021 offensive tackle Savion Byrd. Blackshire is another elite prospect from the south Dallas powerhouse. He’s a throwback inside linebacker prospect.

Harris is a potential B-backer candidate for the Longhorns. The District 9-5A Division I newcomer of the year recorded 83 tackles, including 21.5 behind the line of scrimmage, and 4.5 sacks last season as a sophomore. He also notched six pass breakups and two interceptions. He’s a well-rounded athlete who’s comfortable in space, which means he could play multiple linebacker positions at Texas. He’s high on the Longhorns.

Extremely blessed to EARN an offer from THE University of Texas🐂🤘🏽 #HookEm pic.twitter.com/F5LZAvf5rc

The Longhorns like raw athletes from East Texas and Smith fits the bill. He’s a long, athletic outside linebacker who could play B-backer in Texas’ scheme, focusing on rushing the passer like 2019 starter Joseph Ossai. He’s a three-sport athlete who plays basketball and is a high-jumper in track. Smith recorded 57 tackles and two sacks as a sophomore.

Want to know how highly Texas thinks of Coffey? He’s the only true safety prospect in the 2021 cycle who currently holds an offer from the Longhorns. He’s clearly the top target for Orlando and the defensive staff at the safety position. He’s already a two-year starter. The Longhorns are in great shape.

Ibraheem remains the only uncommitted in-state cornerback with a Texas offer following the pledge to Alabama by Austin LBJ four-star Latrell McCutchin. Virginia native Tony Grimes and Georgia’s Malik Williams are the only other two prospects at the position with a UT offer. Ibraheem is a long, physical corner, which is what Texas prefers on the outside. He’ll only improve as he adds strength.