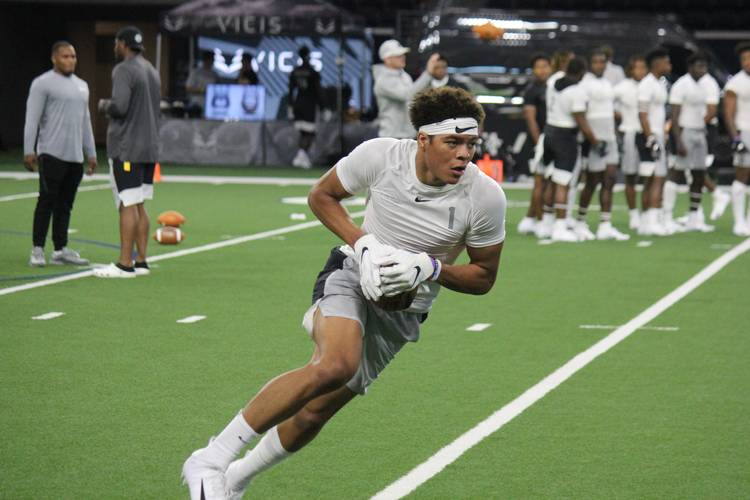 Seven of Texas’ 11 pledges are projected to play offense. The Longhorns have enjoyed a strong month of July on the defensive side, adding outside linebacker Prince Dorbah and defensive linemen Vernon Broughton and Van Fillinger.

The Longhorns are searching for quality, not quantity, in 2020 after signing consecutive top three classes that included a large number of players. Couple that with a great start in a loaded 2021 cycle and it’s understandable why Texas might save a few scholarships in 2020 with an eye on the next class if the prominent targets remaining on the board choose other schools. The trend of commitments before the start of a player’s senior season means there aren’t as many available prospects, unless Herman and company can flip five-star talents like running back Jase McLellan, cornerback Jaylon Jones or wide receiver Demond Demas.

For now, let’s focus on targets who remain uncommitted. Texas’ 11-man class ranks 18th in the country. It won’t reach the size to rank within the top five, but the Longhorns can ink another top-10 class if the right combination of targets land in Austin.

It’s no secret that Lindberg is a favorite of UT offensive line coach Herb Hand. Lindberg is the best tackle prospect in the state with Garth a possible guard in Texas’ system. Lindberg bends incredibly well for a young prospect his size, and will only improve his hip flexibility and core strength as he retools his body in a college weight and conditioning program. Texas was considered a big favorite early in the process, but other teams are building momentum the longer he remains uncommitted. His older brother attends Texas as a student. Stanford and the SEC powers aren’t going down without a fight, however.

Texas became a realistic landing point for Wilson after a successful visit to Austin in late June. He ended up staying on campus a few extra days after his mother returned home because he was enjoying himself a week before The Opening Finals in Frisco. The Longhorns love big, tall wide receivers who resemble small forwards in basketball as much as football players. Texas hammered home that point by showing him how it utilizes Collin Johnson, and how it wants to deploy Malcolm Epps in his second year on campus. Getting Wilson away from the West Coast won’t be easy, but Texas stands a chance if it gets him back in Austin for a big game in the fall.

Thompson is expected to join high school teammate Ja’Quinden Jackson by committing to the Longhorns on Aug. 1. He’s a big safety with a physical presence. He even played some outside linebacker for a Duncanville team that reached the Class 6A Division I state championship game. He’s not a cover safety in the mold of Caden Sterns. Thompson is an enforcer who loves to play downhill and help in run support. He’s an excellent candidate for the Joker position that was manned by B.J. Foster for much of his true freshman season. Texas feels like Thompson is an ideal defensive fit even if he lacks elite speed.

Collins started his career as a skinny former basketball player. He’s almost offensive tackle-sized at this point as he fills out his 6-6 frame with an added emphasis on the weight room. Texas wants to pair him with Broughton, a similar sized player with the same ability to play inside or outside along the defensive line. Texas likes over-sized defensive ends who can hold the point of attack against the run and Collins defines that body type. The Longhorns are considered the favorites for the local product, but he likes to keep tight-lipped about information.

Texas loves the potential of Umanmielen, a big-bodied defensive end with pass rushing capabilities. He’s the perfect fit for Texas’ 4i position currently occupied by Malcolm Roach. The Longhorns see similarities between Umanmielen and the all-conference candidate. The Manor product likes Texas, but isn’t sure about UT’s defensive scheme. He’s said that he prefers a four-man front to the odd-man scheme defensive coordinator Todd Orlando uses on at least half of his defensive snaps. Texas A&M is a real player for his commitment because of that reason.

Thompson is the most recent offer in the 2020 class and he’s already trending toward the Longhorns. The East Texas safety is shooting up the national recruiting rankings and finally getting the recruiting attention his talents demand. Thompson is the 16th-ranked safety in the cycle and a national top-200 player. He was a first-team all-district player as a sophomore and the district’s defensive MVP as a junior, recording more than 90 tackles in each season. Thompson is a rangy safety with good instincts. He’ll improve as he adds weight to his wiry frame.

Our 11th annual Top 25 countdown: No. 3 Georgia still has an Alabama, SEC problem to solve