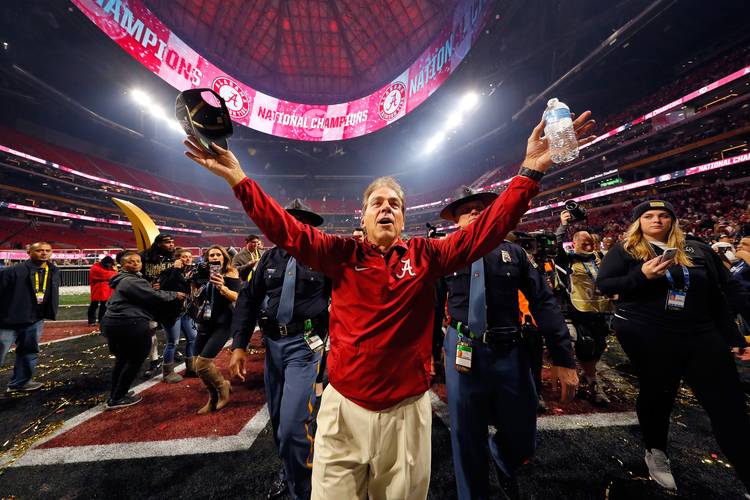 We’re 34 days away from the 2019 season opener, but it’s never too early to talk college football. We continue with our 11th annual countdown series of our preseason Top 25 as selected by the American-Statesman sports staff. Last year’s eventual CFP semifinalists ranked first, second, eighth and 13th in our 2018 poll.

And their worst-case scenario: Worst case? The continuing changeover in the Nick Saban staff impacts team continuity, allowing another SEC team to win the conference.

Last year, Alabama was No. 1 on our preseason poll.

Inside the Crimson Tide

Spring cleaning: Saban found himself on the injury list this offseason. He had hip replacement surgery, but was back in the office 36 hours later. He also had to deal with a huge staff shakeup. Seven assistants left the program, including both coordinators. One familiar addition was former Texas quarterback Major Applewhite, who was fired as the Houston Cougars’ head coach at the end of last season. Applewhite will be an offensive analyst. Only three assistants return from last year’s staff and just one, special teams coach Jeff Banks, will have the same assignment … Another notable departure was quarterback Jalen Hurts, the two-year starter who lost his job to Heisman runner-up Tua Tagovailoa. Hurts transferred to Oklahoma and according to odds set by Las Vegas, he has the third best chance to win the Heisman. … Alabama had 10 players selected in the NFL draft, the most for any school for the second straight year.

Perfection would be perfect: Saban has openly talked about how he’d prefer Tagovailoa to make safer decisions. It should be noted that Tagovailoa led the country with a quarterback rating of 199.4 last fall and had an incredible touchdown-to-interception ratio of 43-7. His quarterback rating was an NCAA record, so it’s difficult to imagine a better season, statistically. Still, Saban said earlier this month: “Sometimes those things have worked out extremely well. And other times they’ve led to some disasters. So having a little better judgment about when to say when can be an asset.” Saban still is irked about the two interceptions Tagovailoa in the national championship loss to Clemson.

Welcome back, Sark: Steve Sarkisian, the former head coach at Washington and USC, rejoined Saban’s staff as an offensive coordinator. He’s worked for Saban before, serving as as offensive analyst in 2016. He was promoted to play-caller for the national championship game, his only time calling a Saban offense until this season. Sarkisian had been the Atlanta Falcons’ OC the past two years but was fired at the end of 2018. The Alabama offense probably won’t change under Sarkisian. It ranked sixth nationally in total offense last season, averaging 522 yards a game. That’s the only time the Tide have ranked among the top 10 over the last decade.

Defensive issues: A terrific Alabama defense is about as easy to predict as hot days in August. But last year, the Tide took a big defensive dip. After leading the nation in total defense the last two seasons, Bama dropped to only 16th best in the country. Over the past 10 years the only other time the Tide failed to finish in the top five was 2014. Saban elevated Pete Golding, the inside linebackers coach, to coordinator, replacing Tosh Lupoi, who took a job, with a drop in pay, with the Cleveland Browns. This is Golding’s second season with Saban after leaving UTSA for Tuscaloosa.

The key game? Nov. 9, LSU. It’ll be the final contest of a stretch of three straight home games.

No. 3: Georgia still must solve its Alabama problem in the SEC

Our 11th annual Top 25 countdown: No. 3 Georgia still has an Alabama, SEC problem to solve