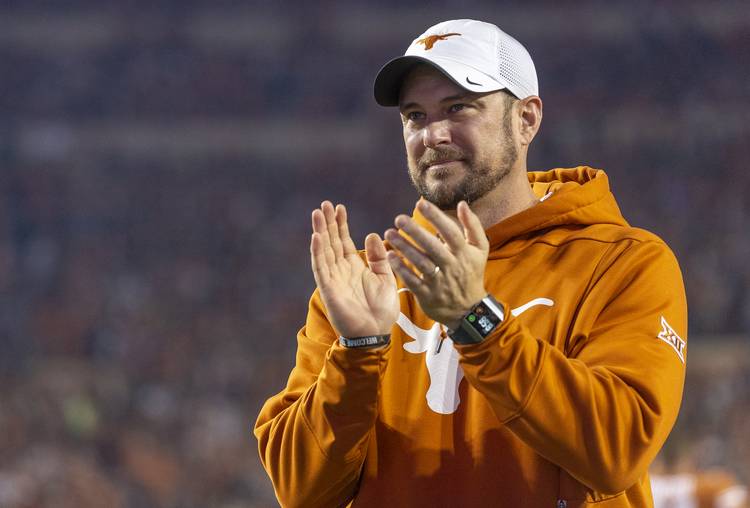 The Longhorns are stocking offensive weapons for the future. The momentum built over the past 10 days continued Friday with the commitment of tight end Juan Davis of Everman High School. The 6-4, 217-pound three-star was a first-team all-district selection as a sophomore wide receiver, recording 41 catches for 499 yards and seven touchdowns.

Davis is an exciting athlete just tapping into his potential on the football field. He looks like a giant on the track when he competes in the triple jump and 200 meters. It’s that athletic upside Texas wants in its ranks. Davis is now the fifth commitment for Texas in the 2021 cycle, with each one projected to the offensive side of the football.

Skill set: Davis is raw. He’s listed as an athlete on most recruiting services because the three-star projects to tight end in college despite playing wide receiver in high school. Texas’ commitment to using big-bodied wide receivers could see him stay out wide in certain situations. His build suggests that Davis will arrive on campus at nearly 240 pounds. Once he learns the position, he could be an excellent candidate for the H-Back position formerly occupied by Andrew Beck.

Immediate impact: Texas is recruiting tight ends with success. That means Davis shouldn’t need to arrive on campus ready to contribute. The Longhorns signed a pair of tight ends in the 2019 class and hold a commitment from Bishop Dunne athlete Jaden Hullaby in the 2020 class, who also projects to H-Back. Davis is a player the Longhorns can stash and develop before utilizing him as a mismatch nightmare against smaller defensive backs or slower linebackers.

Fitting into the program: Texas wants to be multiple on offense. That system requires players who provide versatility. Davis is potentially one of those players with his rare combination of raw athleticism coupled with the ideal frame for the H-Back position. It’s up to the coaches to mold that talent into productivity.

Recruiting at the position: The 2021 class is moving at a frenetic speed with Herman and his staff aggressively pursuing early commitments for the first time in his tenure. The Longhorns feel they were beaten to the punch in the 2020 class and don’t plan to repeat the mistake. Davis is Texas’ second tight end prospect of the cycle, joining Lake Travis’ Lake McRee. If Texas views him as a wide receiver, he joins Dallas Skyline wide receiver Quay Davis as the second commitment at that position in the class.