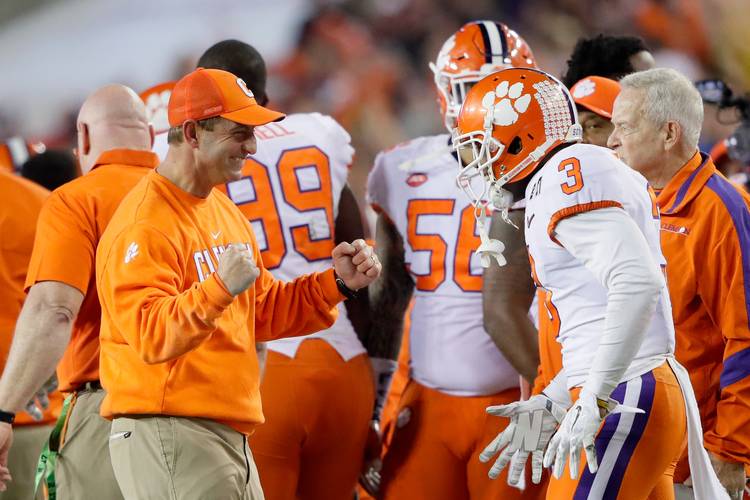 We’re 32 days away from the 2019 season opener, but it’s never too early to talk college football. We conclude our 11th annual countdown series of our preseason Top 25, as selected by the American-Statesman sports staff. Last year’s eventual College Football Playoff semifinalists ranked first, second, eighth and 13th in our 2018 poll.

The Tigers’ best-case scenario:  Go ahead and pencil them in this season’s CFP, if not the final. It’s very likely that the Tigers pick up exactly where they left off after blowing out Alabama — let those words sink in for a minute — by a whopping 28 points in the national title game. Trevor Lawrence may have won last year’s Heisman Trophy if he’d started every game; he threw for 3,280 yards and 30 touchdowns with only four interceptions in 10 games and returns as this year’s favorite to be the best player in college football. Dabo Swinney may have grabbed the throne away from Nick Saban as the game’s premier coach with two titles in the last three seasons. And he seems poised to ride to another title appearance with the game’s best offense with spectacular receivers and running backs, an aggressive defense hungry to show there will be no dropoff in 2019 and a friendly schedule that has Clemson dodging several of the ACC’s better teams.

And their worst-case scenario: Worst case? Only lapses by the defense, which sent all four heralded linemen to the NFL and lost two of its top three tacklers at linebacker as well as three strong backups, could allow Clemson to stub its toe. It’s hard to imagine Swinney allowing complacency to sink in after winning his last 10 games by 20 points or more, but a dangerous home game with rising Texas A&M in the second week and a road game with nemesis Syracuse the following week could slow the Tigers’ serious momentum. Even at that, an off season would probably mean only 11 wins in the regular season and a lower seed in the four-team College Football Playoff.

Last year, Clemson was No. 2 on our preseason poll.

Spring cleaning: For the first time in a long while, Clemson may finally come back to earth with its defensive front. All four spectacular down linemen have finally left as Christian Wilkins (Dolphins), Clelin Ferrell (Raiders), Dexter Lawrence (Giants) and Austin Bryant (Lions) were drafted, the first three in the first round. End Xavier Thomas figures to take the lead there, and tackle Nyles Pinckney sat out the spring with an injury. … RB Tavian Feaster remained in the transfer portal, and the program might look at incoming freshmen Chez Mellusi and Michel Dukes as part of the team’s three-headed backfield headed by Travis Etienne, perhaps the best in the country at his position, and a unit that includes sophomore Lyn-J Dixon. … Since 2010, Clemson has had eight straight seasons of 10 wins or more to go with the two national championships and four ACC titles and is 97-15 over that period. … Look for great play from the secondary, which Swinney labels the deepest and most talented he’s had. Junior CB A.J. Terrell could have a breakout year. … The coaching staff remained intact, including defensive coordinator Brent Venables, who turned down interest from several suitors like Texas Tech.

A show of hands: No team has a better group of receivers than Clemson, which has NFL star quality in 1,000-yard producer Justyn Ross and juniors Tee Higgins and Amari Rodgers although the latter tore his ACL in the spring. The super athletic Ross shined as a freshman and was spectacular in the playoffs with 148 yards of receptions against Notre Dame and another 153 versus Alabama. The 6-4, 205-pound Higgins, who has been compared to Tigers great Mike Williams (Chargers), doesn’t have to take a back seat to any receiver in the country. Alas, Hunter Renfrow, who had the game-winning catch against the Crimson Tide in the 2017 championship game, has finally departed.

Chinks in the armor: The one Achilles heel for the Tigers could be their linebackers or special teams. They lost five at that position and are counting heavily on Isaiah Simmons and James Skalski, who have 16 starts between them. One football magazine ranked the special teams a lowly 10th in the ACC. A replacement has to be found for placekicker Greg Huegel, who kicked 25 field goals in 35 chances the last two years, and sophomore kickoff specialist B.T. Potter could be first in line. Rodgers is ahead of schedule in his rehab from knee injury but the coaching staff might not want to expose him to injury as a punt returner. Another wide receiver, Derion Kendrick, who looked sharp in a spring experiment in the secondary and might stick there, might assume those punt return duties after returning kickoffs last season.

Leader of the class: Clemson is full of star power on both sides of the ball, but Swinney raised some eyebrows when he didn’t bring Lawrence or Etienne or any of his marquee receivers to ACC media days. Instead, he brought older veterans like senior guard John Simpson, an All-America candidate himself, who didn’t lose out on exposure or his sense of humor. He wore a long blonde wig to mimic the flowing tresses of his sophomore quarterback and created quite the stir.

The key game? Sept. 14, at Syracuse. Clemson-Syracuse has to be considered one of the growing rivalries in the game. Syracuse won in 2017 and very nearly repeated with an upset last season, leading by 10 in the fourth quarter. The Orange will be without their starting quarterback, best receiver and three offensive linemen for this matchup, but Dino Babers has them on the rise and may have Clemson’s number.

No. 3: Georgia still must solve its Alabama problem in the SEC

No. 2: Alabama is loaded (again) and a strong CFP contender (again)

The Dotted Line: Who is the top prospect from Texas in the 2021 class?