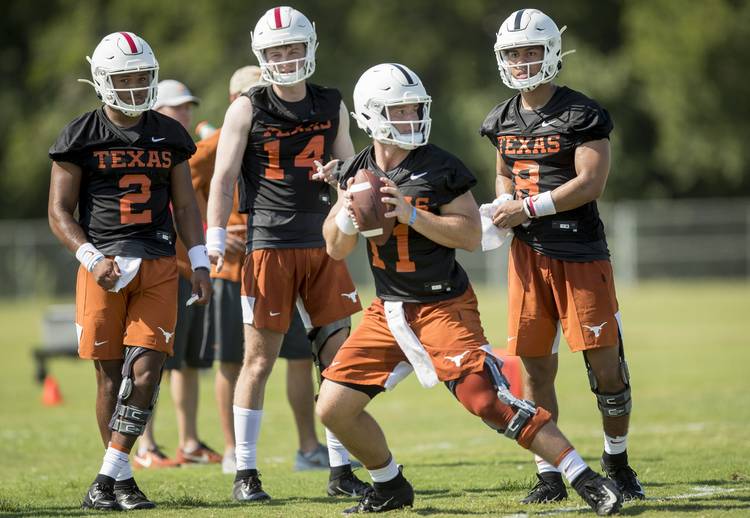 One by one, yellow school buses rambled up to the Whitaker Sports Complex on Friday, and each trusty machine’s air brakes let out an exhaustive hiss.

The beefy, overgrown men that poured out the door weren’t exactly grade-schoolers. But their eagerness and excitement was unmistakable. Isn’t everybody’s on the first day?

Two hours later, Texas’ first practice of the 2019 season was in the books. And so begins the “Groundhog Day”-like march through August, where every day is the same but all are equally important in kick-starting head coach Tom Herman’s third season.

“Really excited to get out there,” Herman said. “I told the team last night that I woke up before my alarm clock yesterday morning excited to see them, get around them, meet with them and then obviously today to get them out there running around.

“For practice one, the effort level was outstanding,” he added. “Certainly, missed assignments and poor technique here and there, and we’re OK with that. As long as they’re sticking their foot in the ground and running and going as hard as they can, that’s a successful practice in practice No. 1.”

Herman is a true believer. He voted his own team “ninth or 10th” in the top-25 coaches poll that was unveiled Thursday. Texas was ranked 10th.

By NCAA rule, players are required to wear only helmets, shirts and shorts for two days. Herman doesn’t believe that’s real football, and if everyone’s being honest, it isn’t. The next two days, players can wear helmets and shoulder pads but still must wear shorts. Texas can’t go in full pads until the fifth practice day.

So it’s hard to gauge who really stands out in sweaty T-shirts. The first two days are mostly about the eye test. Who looks like a college football player?

Herman greeting the defensive players getting off the bus. Everybody’s here, but FYI, we can’t shoot video inside the gate. Updates later this a.m. pic.twitter.com/dshvzIdSxC

Receiver Malcolm Epps (6-6, 245) looks like a 30-year-old with a mortgage. Defensive tackle Keondre Coburn (6-2, 340) has that barrel-chested look of a concrete mixer. Freshman receiver Jake Smith, a 6-0, 200-pound high school All-American, was the only one who looked out of place, unless of course his place is in the end zone.

Defensive coordinator Todd Orlando said the next few weeks are all about “racing the clock, but I know we’re excited about it.”

“I love fall camp,” Orlando said in late July. “You get into a meeting, and you take the stuff in the meeting and you go out to the practice field. Then, we go back and watch the tape while (the players) go take a nap. But in four hours, we sit back down and go over what we just saw in practice. Then we have another practice, a little walk-through, but you can clean it up.”

Every day, it’s the same thing. Over and over and over again until the week of the season opener against Louisiana Tech on Aug. 31.

During the 30-minute window open to reporters, the Horns spent considerable time on the minutia of special teams. During a passing drill, receiver Joshua Moore had the best catch, a twisting snag that impressed everybody. Devin Duvernay grabbed a low, sinking pass. The quarterbacks, as a group, appeared to be throwing short, but that should improve once their timing returns.

Injury wise, Herman reported that defensive lineman Rob Cummins suffered a “new” knee injury days ago that required arthroscopic surgery; his status going forward is unclear. Receiver Al’Vonte Woodard also got out of a protective boot and should join the fray soon.

Otherwise, it was all systems go. The music was on full blast, too. This team wants to play at that same level.

“We’ve got to find two starting corners that are trustworthy,” Herman said. “We’ve got to find a way to get the best 11 guys on defense out there in different personnel packages. And then we’ve got to make a greater emphasis on running the football with our tailbacks.”

For those curious, D’Shawn Jamison and Jalen Green were the two corners with the first-team defense. Kobe Boyce and Anthony Cook were with the second team.

Orlando has said previously that he ranks every player on defense and wants to create a scheme that uses the best 11 players, almost regardless of their position.

And Herman said the offensive coaches have built more run/pass options into the playbook this year for quarterback Sam Ehlinger. The running backs are better, theoretically in Herman’s mind, and the coaches know they must ease some of the burden on Ehlinger’s running.

“So instead of a run/run option, it’s a run/pass option,” Herman said.

It’s early, and it was only one practice. But the Longhorns appear fully engaged and fully bought in to Herman’s ways. The coach said 61 out of 80 eligible players qualified for the team’s Champions Club dinner held on Thursday.

“Every (player) is probably a bit of an overstatement,” Herman said. “But the few that aren’t, they get exposed by their peers, and they’re learning every day on the importance of it. The majority of the team is, and they understand our expectations. Yeah, this group’s a joy to coach right now.”

Commitment 101: Derrick Harris Jr. is a disruptive outside linebacker