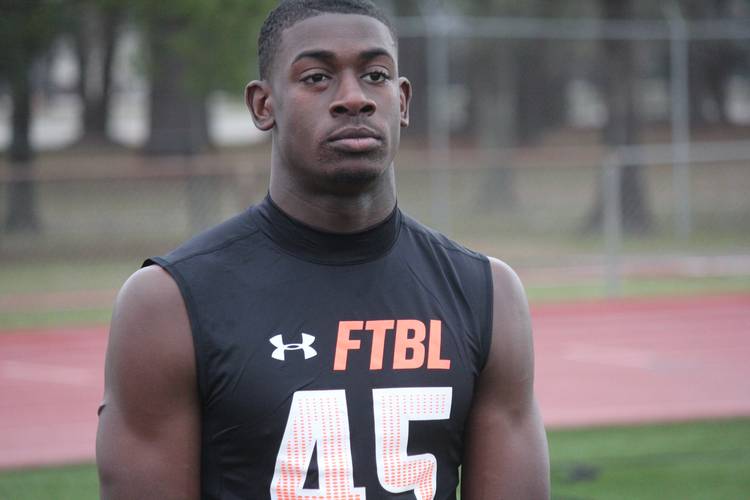 Next 25 member Derrick Harris Jr. is among the top outside linebackers in the 2021 class. (Mike Craven)

Texas’ continued recruiting assault in the 2021 cycle continued Saturday when four-star outside linebacker Derrick Harris Jr. pledged to the Longhorns. The 6-2.5, 215-product of New Caney High School was the District 9-5A Division I Newcomer of the Year as a sophomore after recording 83 tackles, including 21.5 behind the line of scrimmage, and 4.5 sacks.

Harris is the seventh commitment for Texas in the 2021 cycle. He’s the first linebacker to pledge. Harris is ranked No. 17 on the 2021 Next 25. He’s the 14th-ranked outside linebacker in the 247Sports composite rankings. Texas’ 2021 class ranks second in the nation, trailing only Miami.

“I’ve always wanted to go to Texas since seeing Vince Young back in 2006,” Harris said. “I’m excited for the opportunity to play at Texas, and we’ll see how my body grows and where I end up playing in college down the road.”

Skill set: Harris is a long, lean athlete with the ability to play B-Backer or grow into a defensive end as he adds weight to his frame. Harris does his best work when he’s let loose to attack the football off the edge, leading to the idea that Harris is likely to land at B-Backer like Joseph Ossai and 2020 commit Prince Dorbah, both of which were more pass rusher than linebacker in high school. Harris can play off the line of scrimmage and he should only improve in space as an upperclassman. He’s an incredible athlete with high-upside.

Immediate impact: Texas is doing a great job recruiting edge rushers. Ossai and Byron Vaughns are expected to take over the B-Backer position in 2019 and both should be around when Harris arrives on campus in 2021. It’s incredibly hard to project the status of a position group three years in the future, but there’s no question that Texas’ defense needs more playmakers to attack the quarterback. Whether he remains standing up or grows into a three-down defensive end, Harris is the type of prospect Orlando wants for his aggressive defense.

Fitting into the program: Harris is an athletic, aggressive defender who should thrive in the attacking defense preferred by Orlando. Harris is an attacker and could become a real pass rushing nightmare once he develops. Remember, these 2021 commits are only now entering their junior season. Harris is a raw athlete learning the finer points of the position. He’ll rank among the top outside linebackers in Texas for the 2021 cycle. His body will determine his future position because Harris is young enough to continue growing and could easily be 240 to 250 pounds by the time he graduates high school.

Recruiting at the position: Harris was one of Texas’ top targets at outside linebacker. Texas High’s Clayton Smith is the next prize on the board. Linebacker is a tough position to recruit in modern football. Most prospects who would’ve played linebacker a decade ago are now smaller defensive ends or bigger safeties. Texas’ defense relies on safeties, but it needs a few playmakers at linebacker to keep a balance against bigger offensive schemes. The trio of Harris, Smith and inside linebacker Kendrick Blackshire of Duncanville High School would be the perfect cycle for Texas at linebacker.