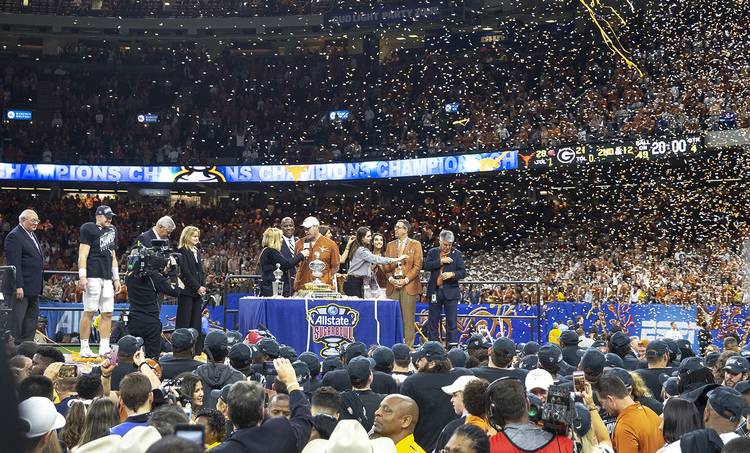 Texas coach Tom Herman has put the Sugar Bowl victory over Georgia behind as he builds toward an even better season. [NICK WAGNER/AMERICAN-STATESMAN]

Coaches typically hate it when preseason hype gets a little too extended, a little too far removed from reality. In their world, always best to underpromise and overdeliver.

Used to be, coaches would summon sports writers into their lair, and you’d go over the roster by position groups. “Yeah, this kid, he’s got something,” the coach might say. “Don’t write about that one. He’s just a guy.” The latter assessment was always damning.

If there’s one thing Texas coach Tom Herman has learned in two-plus years in Austin, it’s that everything around here needs managed care — including everyone’s expectations.

These current Longhorns might be Big 12-championship quality. They might be one quarterback injury away from going a rather pedestrian 8-4 or worse. Oddsmakers in the desert have the over-under set at 9.5 wins in 2019, a perfect victory total that will draw wagers on both sides.

All Herman preaches is that the “only opinions that matter are those in our program.” And he’s right. The opinions of your barber or barista don’t mean squat.

“We love our fans. We want them to always be crazy and excited about the season, for sure,” Herman said Friday. “But again, you can’t speak out of both sides of your mouth.

“We do need to have a sense of confidence that we have put ourselves, the guys that were in the room in last year’s season and the season before and all the offseasons in between, we’ve put ourselves in position to be legitimately in that tier of programs,” Herman said.

Herman got a painful lesson about managing expectations in 2017. In his first season, Herman talked up the offensive line, praised certain individual players and carried himself like the cocksure coach who had just gone 22-4 at Houston.

That season-opening Maryland loss in his debut was an epic disaster. Several players were already looking sideways at their new leader, and then to lose 51-41 in the opener? It was a staggering setback.

The close double-overtime loss at USC two weeks later helped internal morale to a degree. Getting to a bowl game, defeating Missouri and finishing with a 7-6 record was huge, though.

Herman was intent on doing whatever it took to snap a three-year losing streak. Benching an inconsistent receiver and putting up with his dad’s social media taunts? Done. Moving an ineffective and disgruntled running back to tight end? Easy.

It wasn’t entirely smooth. Opposing fans had a field day with Herman’s “securing the bag” sideline shuffle at the end of the Texas Bowl. Die-hards were aghast. Internally, it was viewed as payback for the way Missouri players went out of their way to insult Texas players at a pre-bowl luncheon.

Texas was winning again, but some had already made up their minds. Several unhappy underclassmen who had no business going pro jumped into the draft and never heard their name called.

Most thought 2018 would be more the same, a 7-5 or 8-4 type of season. Beating Oklahoma in the Cotton Bowl was a terrific surprise, and just getting into the Big 12 title game was viewed by some as overachievement.

As it stands right now, Lil’Jordan Humphrey’s 19-yard gain against OU while carrying half the Sooner Nation on his back at the Cotton Bowl stands as the best play of the Herman era.

The way Texas defeated Georgia in the Sugar Bowl was a program-defining moment. It was a thorough beatdown of a true SEC power. The final 28-21 score will never describe how the Longhorns dominated that night in New Orleans.

Quarterback Sam Ehlinger established himself as Texas’ leader of the future, and Herman finally got to exhale after an incredible two-year push.

“I would say we’re heading the right direction,” Ehlinger said. “We’re going to do everything in our power to be the best that we can be. And the best we can be will be a lot of fun.”

There were indications this summer that Texas is headed back on the road to national prominence. Baker Mayfield and Terry Bradshaw both took verbal, unprovoked jabs at Ehlinger. Opposing fans went wild mocking Ehlinger’s primal scream of “We’re ba-a-ck!” on the Sugar Bowl trophy stage.

“I always heard if people hating on you, you must be doing something right,” defensive end Malcolm Roach said. “We really don’t care. We just go about our business one day at a time.”

By this point, the coaching staff has probably eliminated all the malcontents. Herman said 61 out of 80 eligible players qualified for the team’s Champions Club, a designation for those who basically do all the right things.

The coach once got mocked for his hydration tests. Now, players like safety Brandon Jones crow about waking up at 3:15 a.m. and drinking two water bottles just so he can pass the hydration test when he arrives before dawn. Nobody wants to have dark-colored urine and be labeled “You Are A Bad Guy!!!”

The coach is adamant that players lock away their gaudy Sugar Bowl rings and look forward.

“It’s a much different tense of how you’re referring to last year’s team, but there are a lot of lessons that can be learned, both good and bad,” he said.

This is how you change the culture inside a college football program. One day at a time.

And this is how you manage expectations at a place like Texas. It’s not any one thing that happens on a given day. It’s how things evolve over time.

Herman’s predecessor, Charlie Strong, wasn’t fired solely because he lost to Kansas in 2016. It was because of a series of miscues, sloppy play and “what just happened?” moments that came beforehand. Kansas was the final straw.

Now, the opposite is playing out. The Longhorns went 7-6 in 2017 and then reached the Big 12 title game and won the Sugar Bowl in 2018. Next comes a season in which winning a Big 12 title is possible and a high-profile crossroads moment arrives against LSU on Sept. 7.

“Our defense has a chance to be elite,” Ehlinger said after Saturday’s workout. “The speed they have over there is unlike anything we’ve had before. Just because they’re younger, don’t underestimate ’em.”

And the offense? “What excites me? Everything,” Ehlinger said.

Commitment 101: Derrick Harris Jr. is a disruptive outside linebacker

Could Ta’Quon Graham be Texas’ breakout defensive star in 2019?