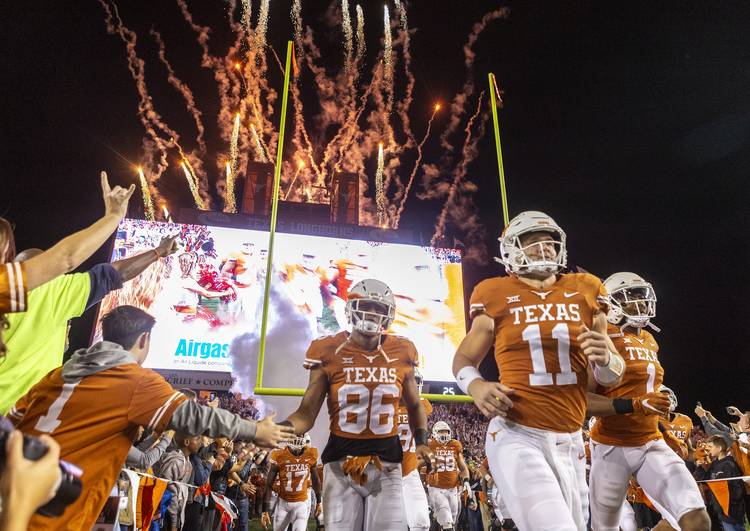 Texas dipped into Florida to land four-star cornerback Ethan Pouncey. The Winter Park native is a 6-1, 160-pound prospect ranking 10th in the nation at his position. Pouncey chose the Longhorns over 20 other offers, including Florida and Auburn. His older brother, Jordan, is a wide receiver on Texas’ squad. Ethan is the 13th member of Texas’ 2020 recruiting class, and the second at cornerback.

“My brother liked Texas for awhile, but for me, it was a place I felt the most comfortable. Austin is a big city and that is what I’m comfortable with, and it was my favorite camps,” Ethan said. “It’s a dream come true to play with Jordan. I never thought we would get this opportunity.”

Words cannot describe this feeling. I just wanted to say thank you to all of the coaches that gave me an opportunity to play at the next level but I have found my home. 🤘🏾#Dreams2Reality #HookEm @cmitchell2284 @_pouncey @BCarringtonUT @washjwash pic.twitter.com/yaFP7Tw83p

Ethan recorded 43 tackles and eight interceptions as a junior. He finished the year with 21 pass break ups. He couples with John Tyler’s Kitan Crawford as Texas’ cornerback commitments in the 2020 cycle. The defensive staff will now focus its attention towards the safety position and prospects like Lukin’s Jerrin Thompson. Other cornerbacks on Texas’ radar include Joshua Eaton and Kelee Ringo.

“It was very helpful to have Jordan help me with recruiting. I could ask him anything and he gave me advice,” Ethan said. “He told me that the grind at Texas is no joke, but it will pay off in the end.”

Skill set: Texas prefers long, athletic prospects at cornerback because the Longhorns prefer to rely on man-to-man coverage when blitzing. Ethan fits that profile with his long frame and knack for making plays on the football. The only thing remaining for Ethan to do is add weight and strength to his wiry frame. There’s a reason Ethan ranks 10th in the nation among cornerback prospects. He’s fast, long, and physical in coverage. He’s a national top-150 player who could move into the top-100 with another productive season to close out his preps career.

“I will play wherever they need to put me,” he said. “I do prefer corner over nickel.”

Immediate impact: Ethan is set to arrive on campus when Anthony Cook and Jalen Green are entering their junior season. Add young talent like Kenyatta Watson II and it’s hard to imagine Texas needing Ethan to contribute to the two-deep as a true freshman. That doesn’t mean he can’t carve out a role early in his career. The rule allowing freshmen to play four games without losing eligibility gives college teams more leeway to use young prospects on special teams without burning a year of possible playing time.

Fitting into the program: Ethan should be familiar with what to expect when he arrives on Texas’ campus. His older brother was part of Tom Herman’s first full recruiting class, though Jordan is yet to make his name at Texas. Scheme wise, Ethan is the prototype for what Texas looks for in a defensive back. A year or two learning and adding weight should allow him to compete for a starting spot once the cornerback positions are back up for grabs.

“Coach (Jason) Washington and I connected immediately,” Ethan said. “He is a great teacher and an even better mentor.”

Recruiting at the position: Texas now holds two commitments at cornerback and that could be it for the Longhorns if Eaton and Ringo head elsewhere. The Longhorns are set at the position for the next few years and could use the scholarship at another position or save it for the 2021 cycle, which is already off to a strong start with seven pledges.

The Dotted Line: Examining Texas’ options in the secondary for the 2020 recruiting class

The Dotted Line: Where will Texas find wide receivers in the 2020 class?