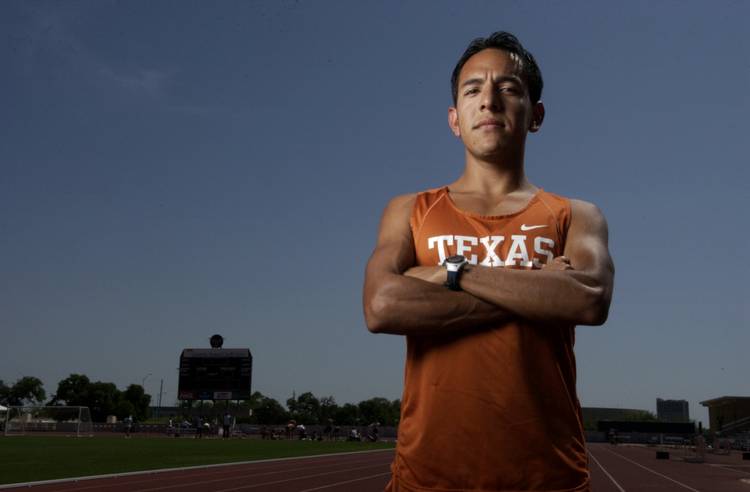 Back in the spring of 2005, Leo Manzano, was a freshman at UT who ran the mile for the Longhorns. He would go on to win a silver medal at the 2012 London Olympics. (Sung Park/American-Statesman File)

Perhaps the peak of that career was his sprint to the finish that earned him an Olympic silver medal at the 2012 Olympics in London. For the record, he earned nine state championship medals in track and cross country at Marble Falls High, then became a nine-time All-American at Texas, and then represented the United States abroad for 12 years.

But Manzano, who will turn 35 in September, has run his last race. On Friday, flanked by his sisters Laura and Lulu at Mike A. Myers Stadium, he shared his thoughts on his career and legacy:

How did London change your life?

It was a huge blessing. We worked very, very hard to get there. Countless years of work and sacrifice. There were people, challenges every step of the way that helped mold me. I don’t want to say that London was the only thing that changed my life. It was a big factor for other things to come. There have always been steps to take for my life to continue shaping.

I’ve been through some injuries. I was out for two or three months. It gave me a lot of time to think and reflect. I’d get better and then I’d have some relapses. My body, it’s just something that you feel. From the time you’re young putting in 40 miles a week to college, where I was putting in 100 miles a week, to my professional career where we’d put in 75-80 hours a week of running.

If you can imagine that over the course of 21 years, it’s a lot of beating the body has taken.

How were you able to compete at such a high level for so long?

There are so many attributes that have been ingrained in me. My dad has gotten up at 5:30 in the morning every day for almost 30 years. You’ve got to get up every day, work hard. But once you do work hard, it was a self-motivator. I wanted to get up because I wanted to be the best. But even trying to be the best, there has to be good people along the way.

As a kid, how did Marble Falls shape you?

Marble Falls is an amazing community. They had a track program but there were very few guys on the team. I remember when coach (Kyle) Futrell would help us with fund-raisers to pay for trips to places like Florida or the Kansas Relays. These people truly cared about the individuals in sports.

Best memories as a Longhorn?

Competing at the University of Texas was incredible. It was one of those things. At one point, competing at the university was a dream. Once I accomplished that dream, I was in awe every day. I’m the first person in my family to go to college. There were so many experiences I’ve taken away from the university. It shaped me as an athlete, but more importantly it shaped me as a person.

Being short (5-5), was that ever a disadvantage?

Being a smaller guy in a sport — I’ve run against guys who are 6-3, 6-4 — they’re almost a foot taller than me. It depends on how you take it. You can either feel sorry for yourself or hey, that guy’s taller but I’m up for the challenge. One of the things that happened along the way — through my football coaches and my track coaches — they helped me mold my mind in a certain way. We are ready for that challenge and we’re going to go for it.

Outside of the Olympics, was there another race that is special to you that most people don’t know about?

Off the top of my mind, in my freshman year at the University of Texas, I didn’t come in as the best guy, but I worked my way up. Two semesters down the line, I’m the national champion in the 1,500 meters. Also, in my senior year it was great to close it off at Texas with another win.

What was your favorite track venue?

If (track) athletes have a chance to compete in Europe, it’s on another level. It’s like the Texas Relays all the time. … If I had to say one race on the professional scene, I’d say Monaco. For some reason, maybe it’s the track or the cool breeze coming off the ocean or just the glamour of being there, people run fast. I actually ran my fastest time there in the 1,500 meters, which was 3 minutes and 30 seconds. At the time it was the fifth-fastest time in U.S. history.

When you earned your silver medal in London, you were criticized for taking a victory lap with the U.S. and Mexico flags. How did you take that?

During that time, it was just in the moment. I am so blessed and I worked very, very hard to make that Olympic team. I was honored to represent seven U.S. teams. It was out of the moment. I didn’t really plan it. I’m also very proud of my Hispanic heritage.

When you look back, do you find it hard to believe everything you’ve accomplished?

Coming out of Marble Falls Middle School and High School, who would have known? I certainly didn’t. It’s been so rewarding and running has been incredible. It’s helped me do so many things along the way. The Olympics. It’s allowed me to see the world, get a scholarship to Texas, graduate. And I helped to inspire kids along the way.

What kind of comments from the public do you hear most?

I get messages on a regular basis from parents and kids, saying, hey, do you remember that moment in San Antonio? Or hey, do you remember that time wherever? You look at me and I’m 5-5. A lot of kids can relate to being small. They see me and say if that guy can do it — and he’s competing against the best — it’s not really about size. It’s about mentality. It’s about hard work and dedication.

What lies ahead for you?

I get to spend more time with Max, my son. He’s six and just got out of kindergarten. It was a bit tough in the beginning because when he was younger, I was gone six or seven months out of the year. And now, I can finally take him to school. I can hang out with him on the weekend. I’m going with my sponsor, Hoka One One, as an athlete ambassador.

I would. Running can be a very tough sport. If you’re going to be a runner, it has to be born in you. If he decides to do that, I’m going to support him 110 percent.

What advice would you give young boys and girls who aspire to be like you?

The No. 1 advice I give kids is to be a student of the sport. Also, listen to your mentors, listen to your coaches who are there. They will tell you to do the right things. That way you can get to the next level. Going back to people in my life, there were (coaches) Bubba Thornton and Jason Vigilante. And there was my sixth grade teacher, Mrs. (Marti) Futrell, who used to say, “hey, you better straighten up. We’re going to start working on this math.”

It comes down to the big picture, right? Not just as a runner, but also as a human being. Going forward, I’d like to inspire kids. I know there are a lot of kids out there who need that mental push to be better. Sometimes everyone has a mental block or a down moment. When you can see something out of the ordinary, you can be, if that guy can do it, why can’t I?