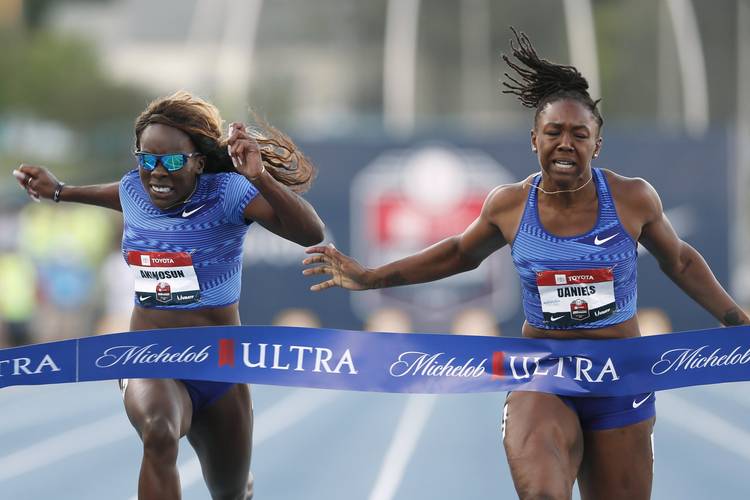 At the NCAA outdoor championships in June, Texas senior Teahna Daniels watched an opportunity slip away.

Nervous to rise to the occasion on her home track at Myers Stadium, Daniels hesitated in the blocks of the 100 final. One lane over, LSU freshman Sha’Carri Richardson crushed the field and set a collegiate record of 10.75. The previous record had stood for 30 years.

“Disappointing,” Longhorns track and field coach Edrick Floréal said of the race. “It was trash. It was an awful race, from beginning to end. We reverted to a lot of bad habits. When the gun went off, it was sheer panic. She was really disappointed, so pissed that she gave away such an opportunity, and to see all the people who beat her sign pro contracts.”

RELATED: ‘I’m still gunning for the win’: Teahna Daniels to go for the gold three times in her Texas finale

Daniels had one day to be upset.

It was time to turn the blinders on, with the USATF outdoor track & field championships in late July in the main view. The top three finishers in each event in Des Moines, Iowa would qualify for the IAAF world championships that begin Sept. 27 in Doha, Qatar, and the top six finishers in the 100 and 400 would be eligible for the relay pools.

Daniels stayed race sharp by entering her first professional events — the Prefontaine Classic in Palo Alto and the Herculis EBS in Monaco, both of which are crown jewels on the IAAF Diamond League circuit. The 22-year-old earned $7,000 in prize money, but she only had eyes on the USAs and making her first senior-level world team.

Seven weeks after the NCAAs, she had her shot. The day before the meet, she signed a professional contract with Nike.

“I realized that this is it,” Daniels said last week. “I don’t have any more chances. It’s my last year, I can’t mess it up.”

She advanced through the rounds to the 100 final. Richardson was there, now sporting a fresh Nike kit, and so was a who’s who of Olympic and world medalists, a collective group of the best sprinters in the world.

Dezerea Bryant, who would later go on to win the 200-meter dash final, was the first athlete out of the blocks and immediately put a gap on the field.

“I just told myself not to panic because that’s what I did at NCAAs,” Daniels said. “I didn’t want to repeat that moment.”

Instead, she kept her cool and surged to the lead halfway through the race. Around 80 meters, she realized she was about to win the U.S. senior title. The moment yielded a maelstrom of emotion — for finally living up to her potential since winning the NCAA 60-meter title as a freshman, for realizing her lifelong dream of making a world team, and for the memory of her late father, her biggest fan who passed away last year.

I already knew what giving up felt like. I wanted to see what happened when I didn't. ————- All I ever wanted was a chance. A chance to show that I belong. A chance to let it be known that I AM a competitor. This race proved it all. Just give me a lane and I WILL compete and perform. ————- ALL PRAISES TO THE MOST HIGH! I am the womens 2019 @usatf 100m National Champion! ————- Thank you everyone for the love and support, you all keep me going! WE ARE HEADED TO @iaafdoha2019 !! @iaaf_athletics @nike @wafelsportsglobal @usatf #Blessed #SwooshGang #NikeAthlete #FloKnows #DontSleepOnT

“It wasn’t even just winning USAs, it was the fact that I made it to Worlds in an individual event,” she said. “That’s something I thought about my whole entire life.”

She crossed the line first in 11.20, ahead of 2016 Olympic gold medalists English Gardner and Morolake Akinosun, the latter a fellow Longhorns product.

The first person she spotted in the stands was her high school coach, Moushaumi Robinson, a fellow Longhorn and 2004 Olympic gold medalist. Then she saw “Coach Flo,” as his athletes call him. And then her mother, who came down from the stands to embrace her teary-eyed daughter.

“The best part with Teahna was watching her mom cry because I think her mom had given up on that,” Floréal said. “There were so many people who had known her story and how close and supportive her dad was, and how much he wanted her to be a pro. It was almost a promise fulfilled type of deal.

“You see the emotions of so many people crying when an athlete just won a race. You realize there’s more to it sometimes than what meets the eye.”

Daniels was a national champion sprinter in high school and captured her first and only NCAA title as a freshman in 2016. Since then, she’s won Big 12 titles and earned All-American honors, but at times struggled with motivation and weight fluctuations. She took the entirety of last summer off from track to grieve for her late father.

Texas head coach Mario Sategna was fired and his entire staff, including sprint coach Tonja Buford-Bailey, was let go at the end of the season. Daniels considered transferring — maybe to Florida State, where she’d be closer to home.

But then she heard that this guy with his own hashtag, #FloKnows, would be coming to UT. She decided to stay.

“I knew his reputation on the track — he’s helped a lot of great athletes — so I figured I might as well stay,” she said. “I was definitely not happy with where I was. Talking with Flo, the goals I had for myself matched what he was saying. He gave me a love for the sport again and made me want to keep training.”

First pic summer 2019 | second pic summer 2018 | third pic summer 2017 ————— The USATF championship is next week and I am in the best shape of my life. I've spent a lot of time thinking about when I was going to share this part of my story with the world. – I went through high school and college with weight issues. From not being fully committed to my track and field career to issues out of my control affecting my mental state. – Now I have taken matters into my own hands, made some life changes, and have lost a total of 19lbs since December – I want to thank God for blessing me with great company and a great mindset this year. Through hard work and dedication I was able to put myself in a position to further my career and take steps to becoming the best version of myself! – I'm still not where I want to be but I'm further than where I started 🤗 📸: @_serenityd #Blessed

Floréal admits that it’s much harder to work with seniors than freshmen as a first-year coach at a new program. “Not that she was poorly coached before,” he makes sure to emphasize, but every coach has their own way of doing things. He had to convince Daniels to buy into his method, which he says emphasizes championship performances over fast times early in the season. He had to figure out how to help her rebuild her confidence, and do it on a deadline, too — “Senior year, the clock is ticking.”

8⃣ athletes coached by @UTcoachFLO will compete in 6⃣ different events at the IAAF World Championships this fall.

“She had a rocky last few years and had some things happen in her personal life that made it difficult to stay focused on track,” Floréal said. “Things like that can sometimes take a toll on a person’s confidence. (Part of the job was) getting her to regain the belief that she can still accomplish her dreams, still be a professional athlete, still be a U.S. national champion, a world champion, an Olympic champion.”

Daniels’ season-best in the 100 is 10.99, the ninth-fastest time in the world this year. Three of the women ahead of her are fellow Americans who did not qualify for the world championships. The top two women in the world are veterans Elaine Thompson and Shelly-Ann Fraser-Pryce of Jamaica, both of whom have run 10.73 this year. Between them they own 18 Olympic and world championship medals.

The road to an individual medal at worlds will be tough. But if Daniels’ journey from fourth at the NCAAs to U.S. champion has taught her (and the rest of the track world) anything, it’s to never count her out.

“I’m a clutch type of athlete,” she said.