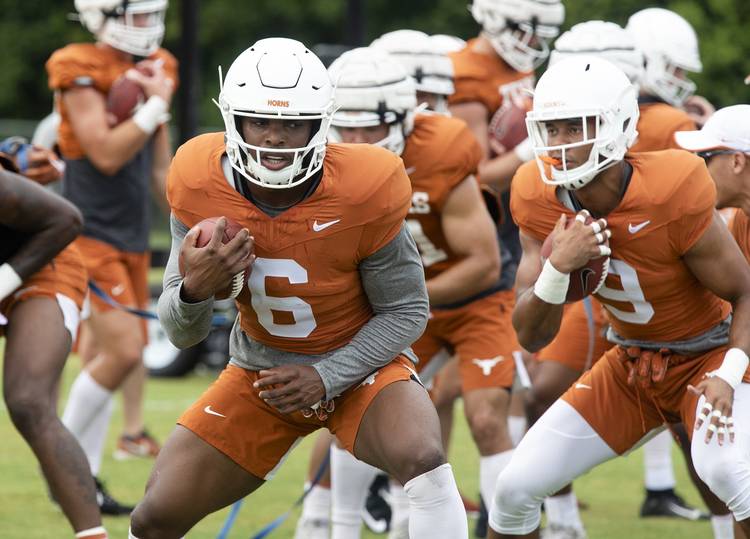 On University of Texas properties, the speed limit ranges between 5 and 15 miles per hour. Recently, a radar gun caught senior Devin Duvernay going 22.5.

But don’t expect Duvernay to get a ticket. The violation, after all, did occur while the UT receiver was running at football practice. Opposing defensive backs may wish that Duvernay would slow down, but his kind of speeding has been accepted by the Longhorns.

In addition to his quick feet, Duvernay also has a set of good hands. As Texas worked its way to a win in the Sugar Bowl last season, Duvernay ranked third on the team with 41 receptions. He averaged 13.3 yards per catch and didn’t drop a catchable ball.

He will be leaned upon for more contributions this season, but he may line up as a new position. Last year, Duvernay started 14 times as the Z receiver spot as UT used his speed to stretch the field. One year later, the senior has moved ahead of sophomore Joshua Moore and freshman Jake Smith as Texas looks to replace Lil’Jordan Humphrey in the slot, or H. Out of the H spot, Humphrey led the team in receptions (86), receiving yards (1,176) and touchdown catches (9).

Duvernay isn’t unfamiliar with his new role. As a freshman, he found playing time in the slot in Sterlin Gilbert’s offense. Herman said the thought of Duvernay filling Humphrey’s shoes was recently broached by the coaches. The move also gives sophomore Brennan Eagles more snaps at the Z.

“I think it’s worked out great,” Herman said. “There’s a learning curve for him a little bit, but he’s so smart it hasn’t been that steep.”

At 5-11 and 210 pounds, Duvernay does not look like Humphrey, the 6-4 Swiss Army knife who played at 225 pounds. But then again, Humphrey didn’t look like a lot of Herman’s former H receivers. Houston’s Linell Bonner and UT’s Armanti Foreman were both 6-feet tall. Reggie Hemphill-Mapps, who split reps with Foreman and Humphrey in 2017, was 6-1, 185.

If you’re asking for Duvernay’s assessment, he isn’t that different from Humphrey. He said both he and Humphrey possess good hands and a solid understanding of defenses. Duvernay did concede that the “speed thing was very different.”

Humphrey’s NFL stock dropped after he was timed at 4.75 seconds in the 40-yard dash at the NFL scouting combine. Duvernay, on the other hand, won a state title in the 100-meter dash his junior year at Garland Sachse. In fact, Duvernay answered in the affirmative last week when he was asked if he’s the fastest player in the Big 12.

Senior receiver John Burt, who is an accomplished hurler on the Texas track team, may object to Duvernay even claiming that he’s the fastest Longhorn. Freshman safety Tyler Owens would have been a state champion himself had he not had to run alongside Houston Strake Jesuit wunderkind Matthew Boling this spring. And what about Smith? “He can go,” sophomore safety Caden Sterns said. Duvernay himself admits that Smith is “pretty fast,” but he thinks that either Burt or Eagles is his quickest teammate.

Duvernay’s speed led to 63-, 75- and 80-yard touchdowns his freshman year. Last season, he had two 39-yard touchdown catches complemented by 1- and 48-yard scores. Ehlinger also misfired in Duvernay’s direction on what could have been a 55-yard post play against Kansas State and a 94-yard route against Iowa State. Duvernay said Ehlinger addressed those misses during the offseason and the two players have worked on their connection.

“We both know — the coaches know as well — we left a lot of plays out there,” Duvernay said.

Duvernay’s 48-yard touchdown against West Virginia was the longest play of UT’s season. The Longhorns and Central Michigan were the only FBS-level schools without a 50-yard play in 2018. Texas had two 50-yard plays in 2017, Herman’s first season, though the Longhorns didn’t score on either of them.

The lack of explosive plays has been a talking point. Five teams on UT’s schedule — LSU, Iowa State, Texas Tech, West Virginia and Louisiana Tech — allowed four or fewer 50-yard plays in 2018. Baylor, however, was burned for 19.

Even without the big gains, Texas’ average of 31.1 points per game ranked 46th nationally. Still, the long-play potential of Duvernay, Eagles, Burt and Smith gives Texas a chance at hitting some few home runs in 2019.

“Explosive plays are fun, but whatever it comes down to,” Duvernay said. “If we’ve got to chip away, we’ve got to do that. If we can get the deep balls, that’s great.”