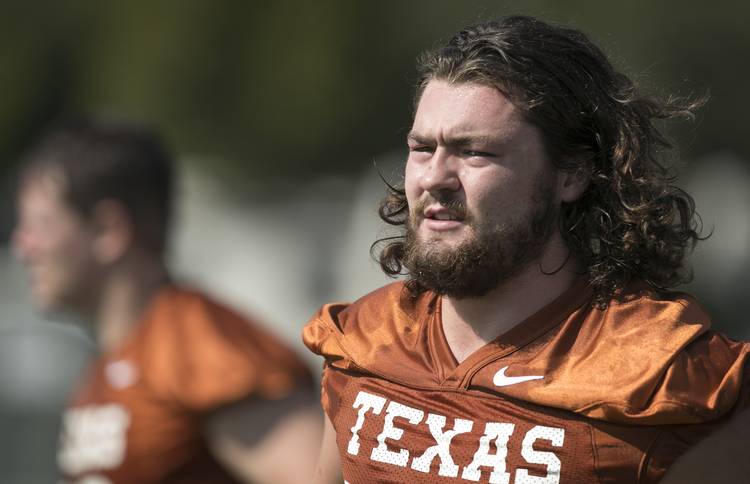 During the first week of Texas practice, it looked odd that graduate transfer Parker Braun, a first-team All-ACC pick at Georgia Tech, was working with the third-team offensive line.

But offensive line coach Herb Hand expressed no concern about Braun’s development as the coaches continue to bring him along slowly to learn UT’s system.

Braun (6-3, 300) is projected to be a starting guard when the season begins Aug. 31. However, head coach Tom Herman has made it clear that all transfers must earn their spot, just like everyone else.

“There’s a huge amount that he has to learn,” Hand said this week. “What he was asked to do from a technique and fundamentals standpoint at Georgia Tech, which made him a great player, the dude did a tremendous job there. But we’re asking him to do different things from a technique and fundamentals standpoint. So it takes time to train those things.”

Braun was a three-year starter at Georgia Tech and was considered by some to be the team’s best offensive player. With Braun paving the way, the Rambling Wreck ranked among the top 10 nationally in rushing all three seasons. Tech even finished first nationally in rushing last year, averaging 325 yards per game.

The Longhorns lost senior guards Patrick Vahe and Elijah Rodriguez. Landing a player of Braun’s caliber was just as important as it was getting graduate transfer Calvin Anderson at left tackle before the 2018 season.

Anderson, who was transferring from Rice, could drive up from Houston to UT’s spring practice and learn the offense. Braun had to finish his degree at Georgia Tech in Atlanta just to be eligible to transfer, so he missed all of UT’s spring drills.

Braun’s first day on the field in burnt orange was the first day of practice on Aug. 2.

“Parker’s got a tremendous football mind, he’s got everything you want, he just doesn’t have a lot of experience doing the things that we need him to do,” the coach added. “So we’re trying to accelerate that as fast as possible.”