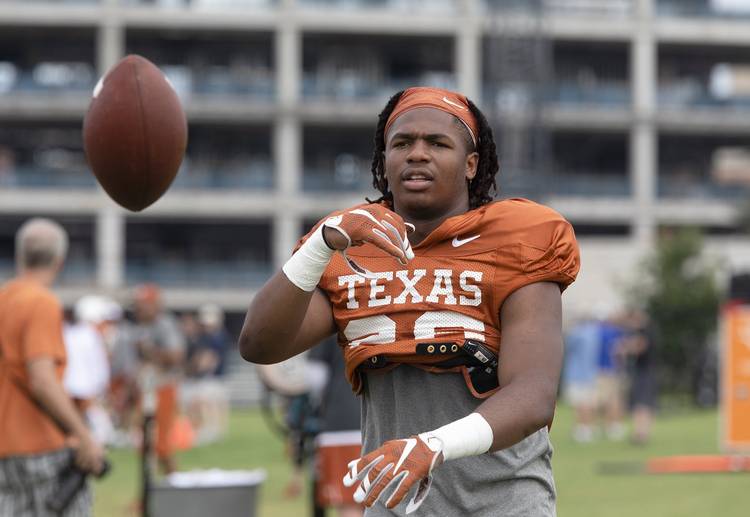 Keaontay Ingram's knee injury is a tough blow for Texas, which is thin at running back. [ANA RAMIREZ/AMERICAN-STATESMAN]

Sunday’s scrimmage was memorable, as promised. The Longhorns might have lost two starters less than three weeks before the season opener.

Running back Keaontay Ingram “tweaked his knee” and safety Caden Sterns “rolled his ankle,” according to Texas coach Tom Herman. Neither player finished the scrimmage, and both left the Whitaker Sports Complex on crutches.

“The on-field examinations look promising, but obviously we’ll know more once we get those guys evaluated,” Herman said.

Both sophomores are expected to be key contributors this season. If the coaching staff had to choose, they’d prefer to get Ingram back sooner. The depth at running back is now perilously thin.

That leaves Whittington and Young, two talented athletes, for sure. But Young is the only one with experience. The Houston Westfield product has played in 27 games and averaged 4.3 yards per carry along with three touchdowns.

Whittington, who enrolled in January, drew rave reviews during spring practice and even more during offseason workouts. Still, he’s untested at the collegiate level.

The Longhorns could look at moving another player to running back, and Herman said, “Obviously, the guy that we talked about is Jake Smith.”

The speedy freshman from Scottsdale, Ariz., has been working at receiver since his arrival this summer. He had 741 rushing yards last season as an all-around workhorse for Notre Dame Prep.

“It wouldn’t be fair for his development at (slot receiver) right now to go be the third-team tailback, you know, just to spell people,” Herman said. “If this is something that carries into the season, then we certainly have to figure something out because we believe you’re not going to survive with two scholarship tailbacks.”

Meanwhile on the field: Herman said he liked the intensity at Sunday’s scrimmage. “The offense wound up winning, but it took the final two-minute drive for that to happen,” he said.

Herman rarely singles out any individual player after these scrimmages, but he did say tight end Cade Brewer “made a great one-handed catch in the end zone today.” The coach said he also “felt” linebackers Joseph Ossai, Jeff McCulloch and Ayodele Adeoye, which meant they all made an impact.

“I did feel it got a bit chaotic when the offense sped the tempo up,” Herman said. “So we’ve got to settle ourselves down and get that fixed. But they knew the call, knew the formation and had an opportunity to line up. I thought they did a really good job.”

Herman said the young cornerbacks were “up and down” and could’ve done a better job battling for 50-50 balls. Defensive coordinator Todd Orlando had said he wanted to see how the corners would perform against tall receivers like Collin Johnson and Brennan Eagles.

As for the quarterbacks, Herman said, “Good. No issue.”

Greg Davis’ role: Former Texas offensive coordinator Greg Davis is working with the current coaching staff to monitor what Herman called the “30,000-foot view of everything that’s going on” and provide input.

“We’re certainly not asking him for new plays or anything like that,” Herman said. “He can be a set of eyes that maybe not always tell me what I want to hear but tell me some real stuff.”

Remembering Darryl Drake: The Pittsburgh Steelers announced Sunday morning that Darryl Drake, a UT receivers coach from 1998 to 2003, died suddenly. He was 62.

Pittsburgh media outlets did not report a cause of death. Steelers President Art Rooney II issued a statement that said, “We are at a loss for words following Darryl Drake’s passing.”

Herman was an offensive graduate assistant at Texas in 1999-2000, working directly with Davis and Drake on a daily basis. Drake left UT after the 2003 season to become the receivers coach for the Chicago Bears.

Saddened to hear of Darryl Drake’s passing. He was a great coach but an even better person who spent his life developing men.

Our thoughts and prayers are with his family and friends. We miss you my friend. Rest easy. 🙏 pic.twitter.com/sTdeidKZR4

“I do want to start by sending our thoughts and prayers to Darryl Drake’s family,” Herman said. “Anything that we can do to support Sheila and his daughters, we certainly will. But Coach Drake was a mentor of mine and someone that I kept in constant contact over the years. Just praying for him and his family.”

Cole Hammer set to tee it up for U.S. Amateur this week