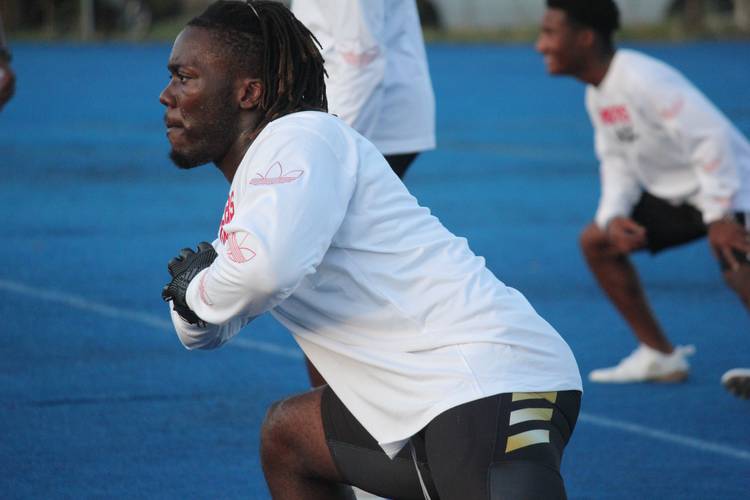 HOUSTON — A host of elite prospects from the Houston-area converged last Saturday night for the final Fast 7v7 tune-up before the start of actual football practices. The stars in attendance weren’t just incoming seniors. The 2021 class is headlining recruiting news with 2020 classes filling. Forty members of the 2020 Fabulous 55 are already committed.

Four-stars Brandon Campbell and Jordon Thomas are among the growing group of 2021 prospects with an offer from Texas. Campbell is a running back from Pearland. Thomas plays defensive end at Port Arthur Memorial. Campbell admitted that Texas’ momentum in 2021, including the commitment of his friend Jalen Milroe, is a tempting wave to join.

“I try and look at my options. I know it would be a dream come true to play with my friends, but I know recruiting is about finding the best fit for me, so that is where I’m focused,” Campbell said. “I need to figure out what is best for me as a player and a student.”

Thomas is going the opposite direction. If he sticks to his plan, the 6-3, 240-pound defensive end won’t pick until after his senior season. That’s still 16 months away. He’s the 18th-ranked player on our 2021 Next 25.

“I don’t plan on committing until after my senior season. I want to take my time,” Thomas said. “I’m in a group text with the Texas commits. I told them I’ll be at the LSU game.”

Herman, and the rest of his coaching peers, are faced with two choices in the modern construct: Take commitments from prospects based on early evaluations or risk losing those elite prospects to programs willing to take the early chance. It’s clear the kids are leaning toward putting the decision in the rear-view mirror.

Texas was beat to the punch in 2019 and 2020, though Herman and his staff rallied in 2019 to sign a top-three class and the 2020 class is now ranked sixth in the nation. The Longhorns will sign great classes as long as the on-field product continues trending upward. Still, it’s clear Texas missed out on some elite prospects in 2019 and 2020 because it aired on the side of patience and didn’t push for early commitments.

“The Texas guys stay on me daily. That’s part of the process. We try to keep in contact and stay on the same page,” Campbell said. “It’s a humbling experience, but I put in a lot of hard work to get here. The key is to put football first. The recruiting only comes with the performance on the field.”

The Longhorns are among the leaders for both prospects. Thomas is among Texas’ top priorities on defense. He’s the type of high-upside pass rusher the Longhorns crave. It’s unclear where he’ll play in college, however, considering he isn’t even 17 and likely still growing. His natural body development will determine whether he is a big defensive end or an athletic defensive tackle.

“I want to find a brotherhood in a college,” Thomas said. “Texas A&M and Texas are standing out. I’m from Texas, so I want to show support to my state. I’ve seen a brotherhood at both places. Coach (Oscar) Giles talks to me. He wants dogs. No puppies, just dogs.”

His goals are clear heading into Memorial’s season.

“I want to improve my footwork and technique as I get more experience,” Thomas said. “There is an added sense of responsibility as an upperclassman.”

Campbell is a future member of the Fabulous 55 and among the top-three prospects at his position within the state. He also knows what he wants in a college.

“I want to have a chance to play early. I want to feel at home,” he said. “I want it to be far enough away to feel like I’m on my own, but close enough to get back home and for my family to come visit me and see me play.”