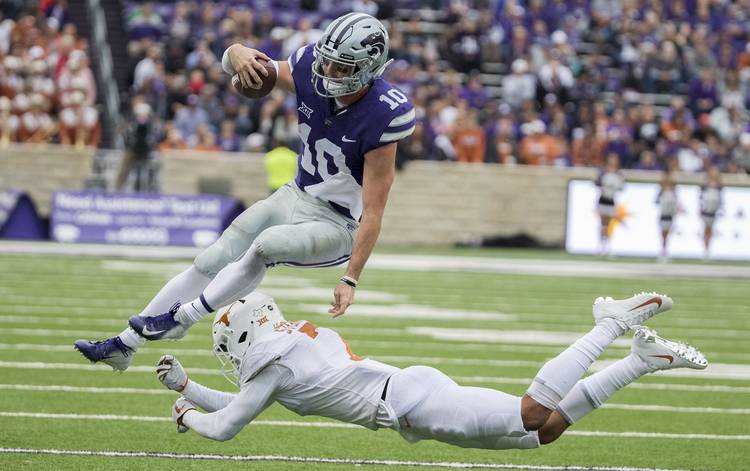 It’ll be a new-look offense under new coach Chris Klieman. But count on the quarterback continuity from Bill Snyder’s old offense. That’s because Skylar Thompson returns as the starter and he’s loving the look of the new Wildcats playbook.

“I feel like my skill set compares really well to how they play,” Thompson told reporters at Big 12 media days in July. “They can both pass the ball, but they are also athletic guys that can run. In this offense we are going to do both. We are going to be the center of the offense with a good run game, play-action game and a lot of different aspects that make it appealing for a quarterback.”

A quarterback in a Snyder offense needed to be a tough runner who could convert a big pass via play action. Thompson believes Klieman’s offense will require the same toughness, but with more reliance on passing.

But the Wildcats will need a drastic renovation of its passing attack. It was last in the league a year ago. Meanwhile, Alex Delton, who battled with Thompson for playing time, transferred to TCU.

FYI: 5-9, 198-pound senior transfer from Ball State; he left his mark on that program, ranking seventh in school history in career yards and tied for fifth in rushing touchdowns.

The Wildcats have no clear answer, for now, on who will be their dominant runner. Alex Barnes, who led the Big 12 in rushing last season, left school for the NFL, and Mike McCoy took a medical retirement. Two other seniors graduated.

Look to a trio of transfers — James Gilbert, Jordon Brown and Harry Trotter.

Brown, from North Carolina, joined the team this summer. He rushed for 1,005 yards in his career with the Tar Heels. Trotter, a one-time walk-on who transferred from Louisville, was promoted to scholarship at the start of preseason training camp. Three freshmen will be competing for time — Clyde Price, Thomas Grayson and Joe Ervin.

For now, Gilbert, who arrived at K-State from Ball State, has the lead in the competition for the top spot, mainly because he was on campus this spring.

But the first-team might he a designation without distinction. Klieman relied on five backs last year at North Dakota State when he was winning an FCS  national title.

FYI: 6-1, 209-pound senior from Overland Park, Kan.; is 10 yards away from becoming the 32nd player in school history with 1,000 career receiving yards. He’s averaged 18.0 yards per catch in his career, which ranks fourth all-time at KSU. And he’s been all about the big play — Schoen has only five career touchdown catches, but they’ve averaged 45.8 yards per play.

This position might not be a weakness. Isaiah Zuber, who led Kansas State in receptions last season, transferred to Mississippi State. But Dalton Schoen returns for his senior season. He caught 32 passes for 520 yards and a pair of scores last fall. Klieman has talked up Schoen during the offseason.