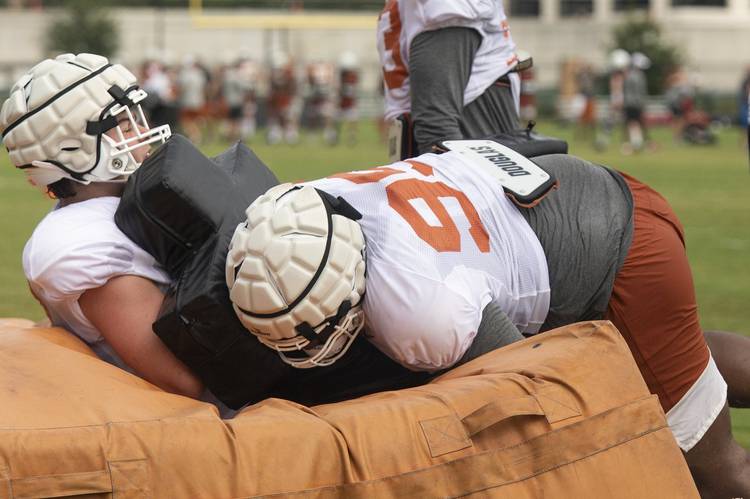 While meeting with the Texas press corps for the first time on Wednesday, Keondre Coburn was asked if he had recently been hypnotized.

The question wasn’t out of left field. The day before, a video featuring the performance of a hypnotist at a UT team meeting had made its rounds on social media. The hypnotic programming of freshman Jordan Whittington to react in disgust when he was told “Thank you” was the highlight of an event that Coburn wanted no part of.

“They ain’t going to control my mind,” the redshirt freshman defensive tackle retorted.

Texas is hoping that Coburn is also uncontrollable on the field this season. With Chris Nelson gone, the 6-2, 340-pound Coburn will likely start in the middle of UT’s retooled defensive line.

Coburn has already endeared himself to fans. That will happen when you take to Twitter after a big win at the State Fair to remind longtime UT heel Baker Mayfield of the online spat you two once engaged in. So we know that Coburn has a good memory and is apt at talking trash.

As for what Coburn can do on the field, plenty of intrigue remains.

Last year, the coaches took advantage of the NCAA redshirt rule and he appeared in only three games against West Virginia, Kansas and Georgia.

An issue with his kidneys sidelined him for part of the spring, but he told reporters on Wednesday that he felt good. Thanks to the work of UT’s strength and conditioning staff, Coburn doesn’t think a snap count should be a concern. In his mind, he can “play a lot.”

A four-star prospect out of Houston, Coburn has been compared to Nelson by Nelson himself. Senior Malcolm Roach sees a little bit of former UT standout Poona Ford in Coburn. “He’s a bull, he’s going to be a good player for us,” Roach said.

It should be noted that Coburn is noticeably larger than Nelson. He has two inches and 35 pounds on Ford’s senior year measurements.

“To be honest, I want to be myself,” Coburn said. “But to be compared to Poona, he’s doing good in the NFL. That was amazing, I felt pride, I felt praise.”

As a whole, Texas needs to replace eight defensive starters from 2018. And don’t think that the Longhorns aren’t aware of the questions that surround such a turnover in personnel. “A lot of people have left,” linebacker Joseph Ossai said. “We know that, everybody knows that and people keep talking about it.”

All three of the starters on the defensive line will be new this season. Roach and Ta’Quon Graham — the expected starters on the line’s ends — have appeared in a total of 60 games, so UT will not be lacking any experience in the trenches. Last season Texas ranked 28th in rushing defense (131.4 yards per game) and 55th in sacks (2.29).

Notes: Senior center Zach Shackelford suffered a foot sprain on Wednesday. Like running back Keaontay Ingram (knee) and safety Caden Sterns (ankle), Shackelford is not considered to miss the season opener against Louisiana Tech. Junior Derek Kerstetter, who is vying for one of the starting guard positions, would move over to center if Shackelford couldn’t play. … After Wednesday’s practice, a UT spokesperson said that around 600 season tickets were still available. … Quarterback Sam Ehlinger is the only Longhorn on the watch list for the Earl Campbell Tyler Rose Award, which is given annually to an offensive player who was either raised in Texas or plays college football in the state.

Triplets of the Big 12: TCU’s Delton can bring a bit of Manhattan over to Fort Worth, Frogs hope