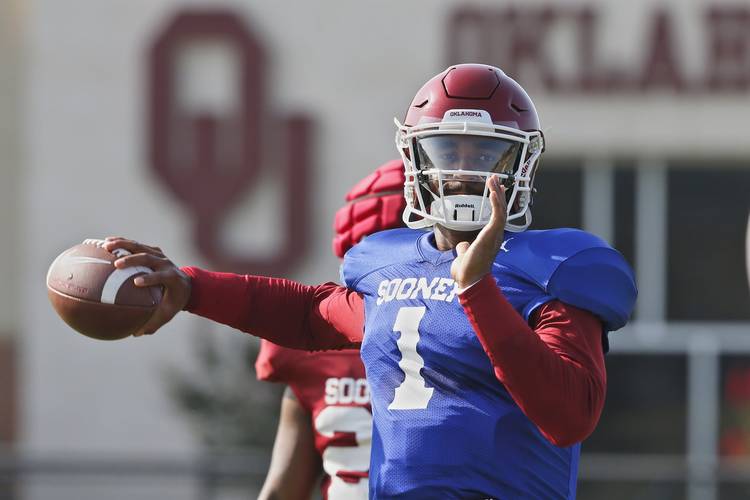 FYI: 6-2, 219-pound senior and Alabama transfer, from Channelview; went 26-2 as a starter at Alabama, leading the Crimson Tide to the 2016 national championship as a freshman. Has already started in four College Football Playoff games. He’s Alabama’s all-time leader in rushing touchdowns and is second in school history for career rushing yards by a quarterback.

Lincoln Riley insists there still is an August quarterback competition.

No one believes him.

An obvious question is whether Jalen Hurts, the transfer from Alabama, will enjoy the same individual success as his immediate predecessors.

The biggest question should be whether Hurts can accomplish what the other two didn’t – bring a national title to Norman. Coincidentally, the last time OU won the national championship was in 2000, when Josh Heupel, a transfer, helped the Sooners knock off Florida State.

Hurts has played in the last three national title games. He lost his starting job in the CFP finals his sophomore season, when Nick Saban benched him in favor of Tua Tagovailoa. The Crimson Tide won, but Hurts was on the bench. Hurts stayed with Bama as a junior and led the Crimson Tide to a come back over Georgia in the SEC title game. But Clemson beat Bama for the national title.

Riley develops quarterbacks. Hurts already is an adept runner, so he can handle the rushing part of an RPO. It’ll be whether he can grow significantly as a passer and adapt to a more finesse Big 12 offense.

The Sooners are dripping in quality backs. Ordinarily, we’d pick the best tailback to feature. Kennedy Brooks, statistically, is OU’s top back. He gained 1,056 yards as a freshman in 2018 and had massive performances in three straight games  against Oklahoma State (165), Kansas (171) and West Virginia (182).

But Brooks was suspended for part of the summer after his former girlfriend accused him of domestic abuse. The school cleared him in a Title IX investigation, but Brooks’ girlfriend posted her accusations on social media right when OU was starting preseason training camp.

OU, in order to continue to feature one of the top running attacks in the country, will need to retool its offensive line. The Sooners had four starting linemen drafted in April.

FYI: 6-2, 191-pound junior from Richmond, Texas; broke OU’s freshman receiving record in 2017 and in 2018 paired with Marquise Brown to become the first pair of Sooners receivers with 1,000-yard seasons.

Oklahoma lost speedy Marquise Brown to the draft. The guy known as “Hollywood” was a first-round pick.

But the Sooners can absorb the loss of  Brown. That’s because they have Lamb and a pair of five-star signees in Jaden Haselwood and Theo Wease.

Lamb, a  junior who has started since his freshman season, caught 65 passes for 1,158 yards and 11 touchdowns in 2018. Statistically, his numbers are the second best among returning Big 12 receivers.

The Dotted Line: Longhorns gain control of the updated 2020 Fabulous 55