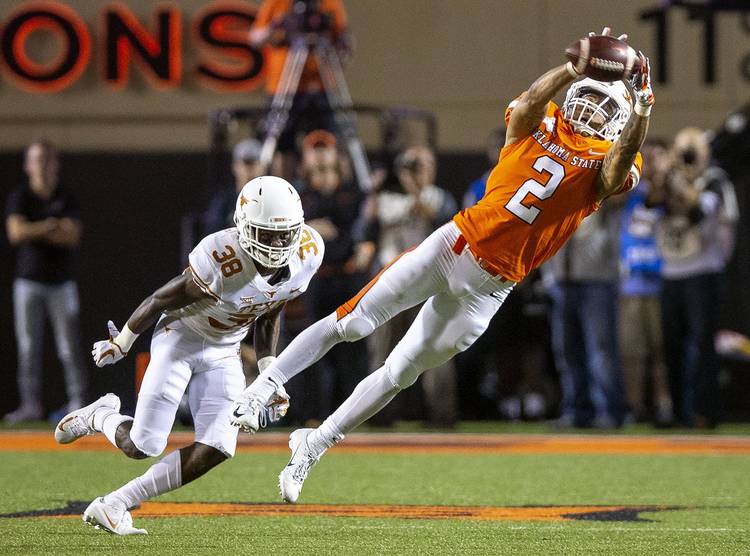 FYI: 5-11, 200-pound senior from San Mateo, Calif. by way of graduate transfer (Hawaii); he brings two years of starting experience to Stillwater but redshirted last year. He played one snap in the 2018 season, in the  Liberty Bowl against Missouri when former OSU starter Taylor Cornelius had to sit out one play because his helmet came off. Started the final 10 games of the 2016 season at Hawaii as  sophomore and all 12 games as a junior in 2017.

Want to know who will be the starting quarterback for the Cowboys? You’re not alone. Coach Mike Gundy says everything is status quo, which means it’ll either be Dru Brown or Spencer Sanders.

For argument’s sake, we’re going with Brown. It’s because he’s the oldest.

Brown transferred from Hawaii this time a year ago and has had one year learning Gundy’s system, which probably won’t change under new offensive coordinator Sean Gleeson.

Brown was a two-year starter at Hawaii and a team captain in 2017. That season — the last time he was active on the field — Brown was the third-best passer in the Mountain West with 2,785 yards, 18 touchdowns and eight interceptions. He also can run the ball, which can be a plus in Gundy’s offense, but not a requirement.

Sanders redshirted last year. He was a coveted high school quarterback when he played for Denton Ryan. He was the Gatorade state player of the year for the 2017 prep season after he threw for 3,845 yards and 54 touchdowns and rushed for 1,380 and 16 scores.

No doubt, he’s the quarterback of the future for the Cowboys. It’s unclear whether that future starts Aug. 30 at Oregon State.

FYI: 6-2 207-pound sophomore from Alberta, Canada; that’s right, Canada. Hubbard was wanted by lots of U.S. colleges in 2017, and he chose Oklahoma State over offers from Alabama, Oklahoma, Oregon, Texas A&M, Miami, Tennessee and TCU. He was one of five finalists lst year for the Cornish Trophy, given each year to the top Canadian player in the NCAA.

Last year: Played four games as OSU’s featured back — 124 carries for 740 yards and seven TDs. (Career: Same.) Those four games saw him average 106.3 yards and 5.4 yards per carry against some tough competition (No. 6 Oklahoma, No. 7 West Virginia, at TCU and the bowl game against No. 23 Mizzou. He had three 100-yard games and five TDs in those four games.

Hubbard is one of the better backs in the Big 12. He emerged last fall when star runner Justice Hill was injured.

“Chuba (Hubbard) looks really good,” Gundy told reporters earlier this month. “For me personally as a coach, you’re always careful to really step out there, but he’s about a pretty (of a running back) as they get. He’s 208 to 210 pounds and I don’t know how fast he is, but he’s really fast. He’s very determined. He’s very intelligent. He understands.”

Hubbard finished his freshman season with 740 yards. But he went over 100 in three of his last four games as the Cowboys’ featured back. His last game — a 145-yard effort in the Liberty Bowl — was a career high.

FYI: 6-0, 185-pound junior from Fort Worth; earned All-Big 12 honors last year as a sophomore, when he was one of three finalists for the Biletnikoff Award. He had 63 catches that went for 10 yards or more, which led the country, and his 66 catches that went for first downs led all Power Five receivers and ranked second in the country. Played at Fort Worth South Hills and still ranks among the state’s all-time top 15 for career receiving yards.

Last year: 86 catches for 1,491 yards and 12 TDs (Career: 93-1,609-12). In three games against top-10 ranked teams, he averaged 5.6 catches for 168 yards and 2 TDs. And when you consider the receivers that have come out of Stillwater — think Dez Bryant, Justin Blackmon, James Washington, Rashaun Woods and Hart Lee Dykes — Wallace became the first player in OSU history to post two 200-yard games against ranked teams in the same season. One of those infamously came at Texas’ expense — 10 catches for 222 yards and two scores. Kris Boyd may still be chasing him around Boone Pickens Stadium.

Oklahoma State’s quarterback will be one lucky guy. Wallace might be the best receiver in the country. No one predicted his breakout year last fall, when his 1,491 yards ranked second best in the country. He averaged 114.7 yards a game. That was third-highest nationally. Wallace was a Biletnikoff finalist last season. He’s probably the favorite this year.

The Cowboys also have a good alternative in Dillon Stoner, who has posted consecutive seasons of at least 40 receptions. He’ll come into the season opener riding a streak of 24-straight games with a catch.

The Dotted Line: Longhorns gain control of the updated 2020 Fabulous 55