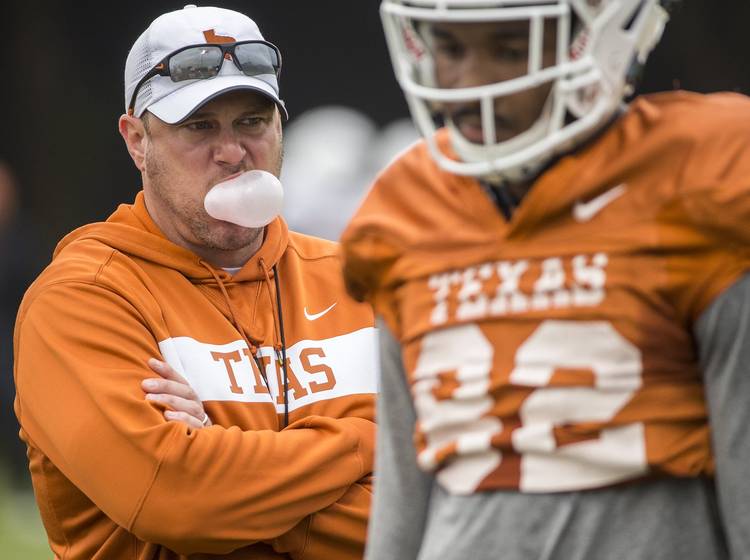 Texas coach Tom Herman looks on as his team runs through drills during a spring practice at the Denius Dields on April 3, 2019. [RICARDO B. BRAZZIELL/AMERICAN-STATESMAN]

The recruiting landscape within the Big 12 changed over the summer as Texas began surging to the top of the rankings. The Longhorns added 10 commitments since the start of June and their national class ranking jumped from the 30s to No. 6, per 247Sports’ composite ratings.

Texas and Oklahoma remain the kings of Big 12 recruiting, while the other in-state schools are struggling as the season kicks off.

Tom Herman’s program held six commitments in a class ranked in the 30s when Jackson pledged on June 3. Texas has dominated the recruiting landscape within the state and the cpnference ever since. Texas added nine more commitments, including Robinson, a five-star running back from Arizona, and defensive linemen Vernon Broughton and Princely Umanmielen.

The Sooners remain a threat within the state on the recruiting trail. Ten of Oklahoma’s 15 commitments play high school football in Texas, including seven of its eight top-rated prospects. McClellan is a five-star running back from Aledo with state championship pedigree. Seven of Oklahoma’s pledges are on the American-Statesman’s 2020 Fabulous 55.

Les Miles is already making his mark at Kansas. The former head man at LSU is leaning on old recruiting ties to build a solid first class for the Jayhawks. Kansas’ class last cycle ranked last in the Big 12 and 70th in the nation. Landing Scott was a head-to-head win over Texas for a member of the Fab 55.

Head coach Matt Campbell solidified the program when he pledged to stay in Ames instead of chasing bigger jobs. That is already resulting in improved recruiting success. Iowa State’s 2019 class ranked 46th in the country and sixth in the Big 12. Jackson is a big wide receiver from Cibolo Steele. Nine different states are represented in the Cyclones’ current 19-man class.

Mike Gundy knows Oklahoma State’s lane on the recruiting trail. He identifies players floating just below Texas’ and Oklahoma’s radars. The 2020 class is built around Illingworth, a four-star with a powerful arm and a 6-6 frame. Waco Connally teammates Trent Pullen and cornerback Korie Black anchor the rest of the class. Russ is considered the fourth-best prospect in Oklahoma.

It’s clear that new head coach Chris Klieman wants to rely more on the high school ranks instead of JUCO prospects. The 2020 class already ranks 20 spots higher than the Wildcats’ 2019 class. Seven of the 18 commitments are from Texas, including Harris, an inside linebacker from Alvin Shadow Creek. Round Rock running back Deuce Vaughn is also pledged.

New head coach Matt Wells needs on-field success before he can compete for the state’s top players. Polk and Brooks are both top 100 players in Texas and will immediately add stability to the offense. Only one of the 15 pledges plays outside of the state. Last year’s class ranked 61st, so Wells is already making steps forward before having coached a single game in Lubbock.

Sylvester and Jenkins are the only four-star prospects currently committed. Sylvester is a member of the Fab 55, a solid pass rusher with upside. Jenkins is one of six out-of-state pledges for Gary Patterson’s program. TCU is likely to climb up the rankings during the season as the class grows from just 11 commitments.

West Virginia recruits a different region than the rest of the Big 12 because of location. It’s the only school in the Big 12 without a pledge from a Texan. But West Virginia does hold a commitment from Jairo Faverus, a cornerback from Bristol Academy in the United Kingdom. Greene is a dual-threat quarterback from Florida. Mayo is the top-rated commitment so far.

Work remains for the Bears to recreate last year’s recruiting success; the 2019 class finished fourth in the Big 12 and 35th in the country. Baylor currently holds the conference’s lowest-ranked class despite possessing more pledges than TCU and West Virginia. Barron, a cornerback from Pflugerville Connally, is the top-ranked prospect.

Triplets of the Big 12: TCU’s Delton can bring a bit of Manhattan over to Fort Worth, Frogs hope

Triplets of the Big 12: Ehlinger, Ingram and Johnson all give Texas some dynamic offensive weapons