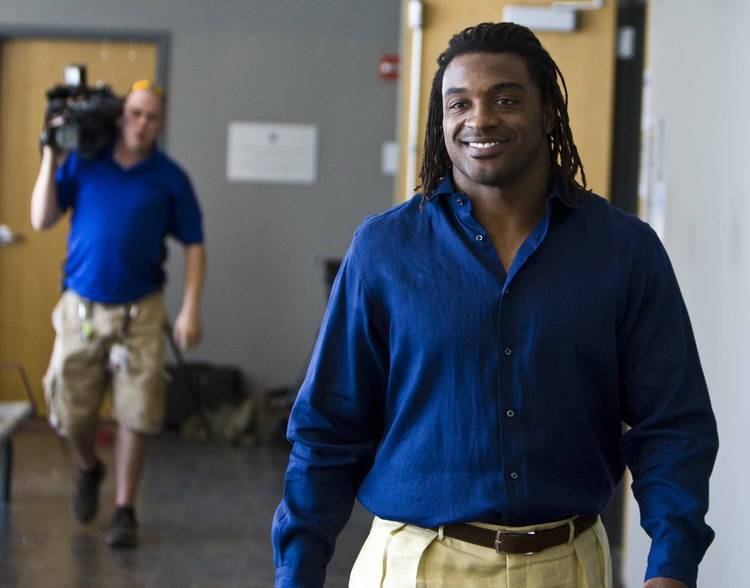 Former UT running back Cedric Benson pleaded no contest to obstruction of a passageway after Travis County prosecutors dismissed a February 2017 drunken driving charge against him, court records show. [Ricardo B. Brazziell/American-Statesman]

Travis County prosecutors dismissed a February 2017 drunken driving charge against former University of Texas star running back Cedric Benson in a plea deal that called for Benson to be found guilty of a lesser misdemeanor charge.

Benson, 36, appeared in court Wednesday for a scheduled pretrial setting and pleaded no contest to obstruction of a passageway, court records show. County Court-at-Law Judge Kim Williams accepted the plea agreement and found Benson guilty, sentencing him to two days in jail and ordering him to pay a $200 fine.

Benson, who had previously undergone an alcohol dependency assessment as part of his pretrial bond conditions, was credited for the two days he spent in jail after his arrest and will not have to return to fulfill his sentence.

“Based on all the facts and circumstances surrounding the case, we felt like this was the best resolution given the totality of all of the factors,” said Corby Holcomb, the assistant trial director for the county attorney’s office.

The DWI dismissal is the third time the oft-troubled Benson has avoided a conviction after being charged in Austin with operating a vehicle or a boat while under the influence of alcohol. The charges in the first two cases, both from 2008, were discarded after separate grand juries reviewed the evidence against Benson and determined it was insufficient for an indictment.

Benson’s longtime defense attorney, Sam Bassett, said he suspects Benson would have prevailed at trial in the latest DWI case but was willing to plead to a lesser charge to put the case behind him.

“He wished to resolve the matter expeditiously without the expense and stress of a three- to four-day trial,” Bassett said. “As his lawyer, I felt we would have prevailed but understand his choice in this case.”

Police tried to stop Benson’s 2006 BMW in the early morning hours of Feb. 18, 2017, for making a wide turn onto North Lamar Boulevard from West Sixth Street. But Benson, according to an arrest affidavit, turned into a nearby convenience store parking lot and walked into the store, disobeying the officer’s command to remain in his vehicle.

Benson said he was unable to recite a portion of the alphabet and could count only to three because he played eight years in the NFL, according to his affidavit. The arresting officer detected a strong alcohol odor and noted in the affidavit that Benson mumbled when speaking with him. Benson refused a field sobriety test, but officers later obtained a warrant for a blood draw that showed Benson’s blood alcohol level at 0.10 — above the .08 legal threshold for driving.

Benson has had several brushes with local law enforcement dating back to college, where he accumulated the second-most rushing yards in Longhorns history from 2001 to 2004. He was arrested on a criminal trespassing charge in 2003 and ended up serving eight days in jail. He also spent 20 days in jail on a 2010 charge of assault causing bodily injury. Benson was charged a second time with assault causing bodily injury in 2011, but the case was dismissed.

In October, a Travis County jury ordered Benson to pay $41,000 to a woman whom his Rottweilers injured in an unprovoked attack while she was walking in her West Austin neighborhood.

Triplets of the Big 12: Ehlinger, Ingram and Johnson all give Texas some dynamic offensive weapons