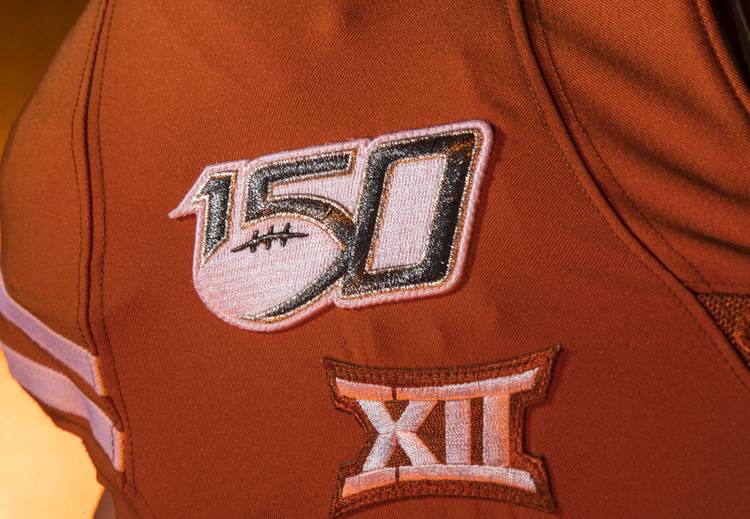 Texas quarterback Sam Ehlinger poses for a close-up photograph of the special "150" patch the Longhorns will wear this season to honor the game's 150th season. Photo taken on June 14, 2019. [RICARDO B. BRAZZIELL/AMERICAN-STATESMAN]

The National Football Foundation, the de facto historians of college football, put pencil to paper and estimate that 5.33 million people have strapped on helmets and cleats since the first Princeton-Rutgers game in 1869.

Targeting was likely en vogue then, although would-be tacklers could do serious damage to their mug as facemasks didn’t become mainstream until the 1950s.

College football, with all of its rich tradition, expansive growth, pomp and circumstance, begins its 150th season in 2019. Schools all over the country, including Texas, will wear a “150” logo patch on their uniforms. But that’s merely a fraction of what’s planned, according to the game’s stakeholders.

“For whatever reason, there’s an American quality to this sport,” former Big 12 commissioner Kevin Weiberg said, “where it seems to transcend a lot of the issues that surround it.”

In June 2017, Weiberg was appointed to work with a 13-person committee that would plan and oversee the game’s 150th anniversary celebration. For symbolic reasons, the committee included Princeton athletic director Mollie Marcoux and Rutgers’ Pat Hobbs, since those two teams first played on Nov. 6, 1869. (Rutgers won, 6-4.)

In fact, there was some push to have those two teams play this season. Princeton is now a member of the Ivy League and Rutgers is in the Big Ten. Weiberg said neither school thought it would be a good fit.

Budgetary realities soon set in as conferences around the country were either slow or unwilling to fund the 150 effort. In stepped ESPN, the television network largely responsible for the game’s explosive growth.

Nick Dawson, ESPN vice president for programming and acquisitions, outlined a slew of 150 year programming that will be almost impossible to miss this fall. It includes a weekly documentary series on Tuesdays that will cover all aspects of college football, and not just the rosy topics you’d expect, either.

“I think people will be fascinated to watch it, because it’s going to be presented in a way that’s a little different in the sense that each week, there’ll be sort of a theme topic,” Dawson said. “It’s much more around sort of big, bold themes that define the sport and its history.”

Weiberg had no issues giving ESPN carte blanche to spearhead the effort. “We could never produce the kind of video content other content they’re working on,” he said.

Multiple games throughout the season are showcase affairs. That includes Texas-Rice on Sept. 14 at NRG Stadium in Houston. The NFL will also recognize the 150 effort during a Monday night game between the Cowboys and Giants on Nov. 4.

On Nov. 6, there are plans for a “special commemoration” at Rutgers.

The first college football game was played on a field were the current Rutgers gym stands. At 3 p.m. that day in 1869, according to Rutgers’ historical narrative, 50 players and about 100 spectators gathered. The game was “replete with surprise, strategy, prodigies of determination, and physical prowess,” according to the archives. Rutgers won, 6-4.

In a 1933 newspaper interview, William Preston Lane, who played for the losing team, said Rutgers “ran us Princeton men out of town. … When we saw them coming after us, we ran to the outskirts of New Brunswick and got into our carriages and wagons and went away as fast as we could.”

Perhaps not exactly. “After the match the players had an amicable ‘feed together,’” the Targum, Rutgers’ student newspaper, reported. “At 8 o’clock our guests went home, in high good spirits, thirsting to beat us next time, if they can.”

Hard to imagine Texas’ Tom Herman and Oklahoma’s Lincoln Riley having an amicable “feed together” after meeting at the Cotton Bowl.

Long-standing rivalries, the clashing of school colors, marching bands and the fans are what make college football what it is. This 150-year celebration is meant to honor all of it. The sport also faces long-term questions about player safety, who should benefit from the financial explosion and what the sport will look like in decades to come. Dawson indicated that ESPN will examine all of that, too.

“I just think that college football has been such a huge part of ESPN, and frankly, vice versa, since the beginning of the company,” Dawson said. “It was a no-brainer that if college football’s going to celebrate, you know, a monumental sort of birthday, that ESPN had to do it big, I think.”