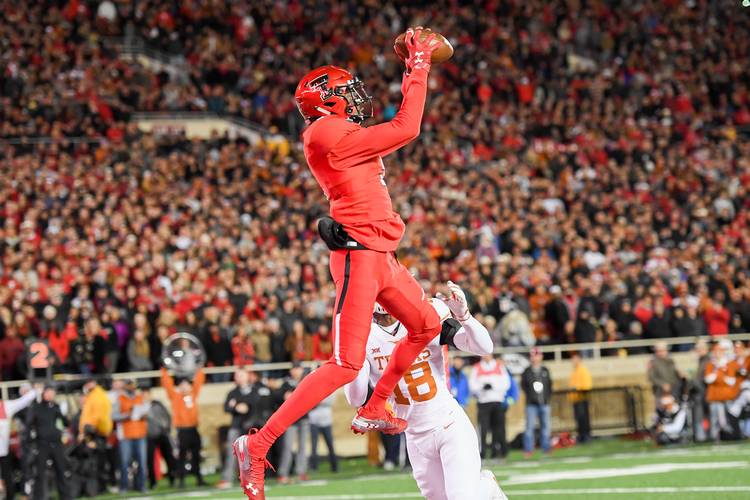 Texas Tech's T.J. Vasher makes the catch for a touchdown against Texas' Davante Davis during the first half of their game on Nov. 10, 2018 at Jones AT&T Stadium in Lubbock. (John Weast/Getty Images)

FYI: 6-3, 210-pound sophomore, from Grapevine; only five other Tech quarterbacks have started a game as a true freshman, and Bowman’s in good company with the most recent three (Baker Mayfield in 2013, Davis Webb in 2013 and Patrick Mahomes in 2014). Speaking of Mahomes, Bowman broke Mahomes’ single-game passing record (both school and Big 12 marks) set in 2014 (598, vs. Baylor) with a 605-yard passing game last season against Houston. Bowman comes from a family of athletes — his father, Kirk, was a Penn State tight end in the early 1980s and played on the Nittany Lions’ 1982 national championship team, and his older sisters Tori and Emily both played soccer at Oklahoma. Picked Tech over offers from Cincinnati, Houston, Illinois and  Louisiana Tech.

One of the biggest questions in the Big 12 is how the Tech offense will perform under new coach Matt Wells. Or, more specifically, how will Alan Bowman perform without quarterback guru Kliff Kingsbury, who now is coaching the NFL’s Arizona Cardinals after being fired by Tech.

Bowman was dazzling in abbreviated parts of 2018, his freshman season. He played in eight games, throwing for 2,638 yards while completing 69 percent of his passes. He caught the nation’s attention when he threw for 605 yards against Houston, the most ever by a Big 12 freshman. But he was twice hospitalized after suffering a collapsed lung (against West Virginia and Oklahoma) after huge hits by defenders.

Wells’ first visit in Lubbock after he accepted the job was with Bowman, who is healthy and practicing.

“I respect his grind,” Wells said at Big 12 media days. “He’s got a great attitude. … I think Alan’s better days are ahead of him. He’s talented.”

FYI: 5-11, 210-pound senior from Oakland; he’s a graduate transfer from Utah, where two of his last three seasons were cut short by season-ending injuries. He started five games last year for the Utes and appeared in all 14 games.

Ta’Zhawn Henry, who like Bowman was a freshman last year, is the leading returning rusher for Tech. He gained 341 yards last fall.

But it remains to be seen whether Henry will be the go-to back under Wells.

Armand Shyne could be the guy. He transferred to Tech from Utah for his senior season. He was the Utes’ second-leading rusher last year. Overall, he’s played in 19 games and has rushed for 885 yards.

“I would say that when I’m feeling good and I’m feeling light on my toes, I feel like I can do a lot of things,” Shyne told reporters. “I can make people miss in the field. I can run downhill, because that’s what I do. I’m going to run aggressive and hard regardless. That’s just who I am.”

Wells liked to call runs at Utah State, with his offense averaging 37 rushes a game in 2018.

FYI: 6-6, 210-pound junior, from Wichita Falls; if he sounds familiar, he should — he’s the nephew of former Texas star Nathan Vasher, who went on to a Pro Bowl career with the Chicago Bears and Detroit Lions. Or maybe it’s because he literally saves his best performances for the Longhorns. Vasher set career marks for receiving yards and all-purpose yards (127) against Texas in 2017, and matched his career high with two TD catches against Texas last year. His TD with 4:47 left cut Texas’ lead to 34-27 in Lubbock.

At 6-6, 210, Vasher is a tall target for any quarterback. Through his first two seasons, which have included 14 starts, he has 84 receptions for 1,232 yards. He and Bowman have nice chemistry, connecting on five touchdowns.

Vasher won’t be Bowman’s only good option. He’ll also have McLane Mannix, who transferred from Nevada. But Mannix isn’t an unknown in West Texas. He starred for Midland High. And his father also was a member of the 1988 Odessa Permian team that was the focus of the book “Friday Night Lights.”

Mannix has caught 107 passes the past two seasons.