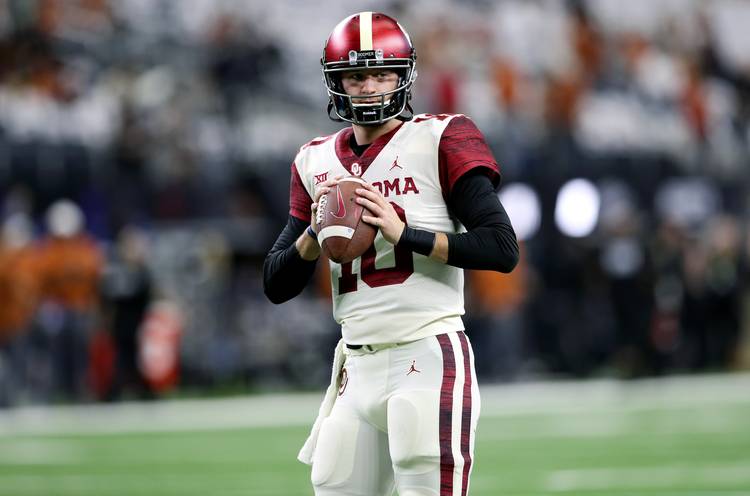 We conclude our annual Triplets of the Big 12 series, looking at every conference school’s expected standouts at quarterback, running back and receiver.

Here, we finish with West Virginia.

FYI: 6-2, 221-pound junior, from Waxhah, North Carolina; signed with Oklahoma in 2016, choosing the Sooners over offers from Auburn, Clemson, Miami, North Carolina State, Tennessee and … wait for it … West Virginia. Played in eight career games with the Sooners, then transferred in January. He made one start at Oklahoma, vs. Baylor on Sept. 29, 2018. He played just one series.

The new West Virginia quarterback still is a mystery. That’s because new coach Neal Brown has yet to make a decision on his starter.

No doubt, it’ll be a transfer. But from where?

Kendall, who switched from Oklahoma to the Mountaineers, is the favorite to win the top spot on the depth chart. The other option is Jack Allison, formerly with Miami. Allison started for West Virginia in the Camping World Bowl, getting the nod after Will Grier opted not to play to prep for the draft. But he wasn’t that impressive in the Mountaineers’ 34-18 loss to Syracuse.

There’s another transfer in the quarterbacks room, Jarret Doege. He started 18 career games at Bowling Green. Doege, the younger brother of former Texas Tech star Seth Doege, enrolled in June. But the NCAA hasn’t ruled on his eligibility for the fall. Brown was offensive coordinator at Tech when Seth Doege was the quarterback.

Trey Lowe, who redshirted last season, also is in the crowded mix.

“The quarterback battle is still up in the air,” Brown told reporters this week. “All three of those guys did some good things, but they put us in some bad spots as far as turning the ball over and taking sacks.”

Kendall doesn’t have much game experience. He backed up the last two Heisman winners at OU — Baker Mayfield and Kyler Murray.

WVU has a scrimmage set for Friday night under the lights. It should go a long way toward helping Brown figure out the quarterback pecking order.

FYI: 6-0, 204-pound senior, from Lexington, North Carolina; McKoy has played in 37 career games, with 12 starts. Was one of the Big 12’s top 10 rushers in 2018. He was the team’s second-leading rusher as a sophomore in 2017 and its top rusher last year. His first career start came against Texas, as a freshman in 2016, and some of his top performances have come against the Longhorns — he scored two TDs in the 2016 game, and put up 149 total yards last year, including a career-best 37-yard catch.

With McKoy, WVU features one of the most dynamic tailbacks in the Big 12. He averaged 5.3 yards a carry last year as the Mountaineers’ main guy. Adding to the depth is Martell Pettway, who rushed for 623 yards a year ago.

Running back is a strength for the team. Don’t be surprised if Brown runs plays from a two-back set.

FYI: 6-6, 199-pound junior, from Birmingham, Alabama; he’s played 24 career college games — 12 with Alabama in 2016, 12 with West Virginia last year. He sat out a season in between, after he transferred. He had six starts last year. He was part of Alabama’s 2016 signing class that included Jalen Hurts, Quinnen Williams, Josh Jacobs and Irv Smith Jr.

The Mountaineers recently have been deep at wideout, with David Sills, Gary Jennings and Marcus Simms. But they’ve also all left for the NFL.

Who does that leave in Morgantown?

The most experienced wideout on the team is T.J. Simmons, whose 28 catches last fall ranked only fifth among West Virginia receivers. Brown has relied on Simmons to be the public face of the program.

Brown also added a pair of transfers. George Campbell is a former five-star prospect from Florida State. Sean Ryan joined the team after transferring from Temple.