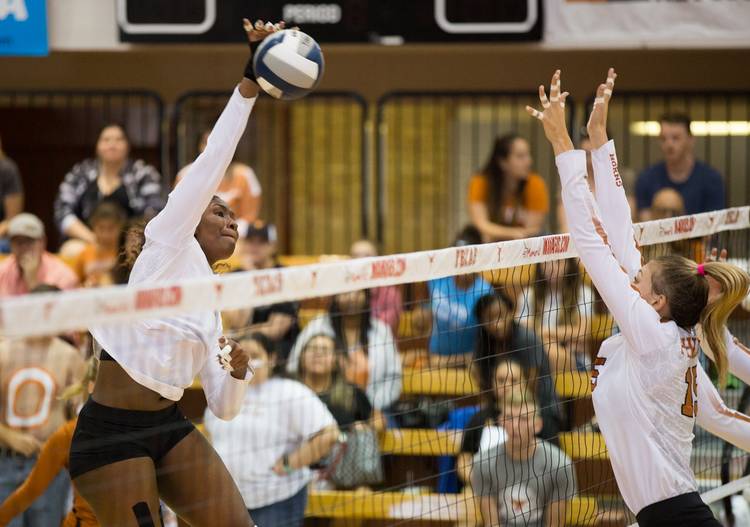 On the Texas campus, the countdown to the 2019 volleyball season is officially underway.

Texas returned to Gregory Gym for its annual Orange-White scrimmage on Saturday. A 25-21, 25-19, 25-23, 16-14 win was recorded by the White team in an intrasquad skirmish that featured past and present members of the volleyball program.

Texas, which is ranked fourth in the AVCA preseason poll, will host Northern Iowa in its season opener Aug. 30.

“I think we’re ready to compete,” senior outside hitter Micaya White said. “We’re kind of this bottle of energy and excitement. I’m excited because I think this team is very special.”

The White team’s starters Saturday — White, outside hitters Skylar Fields and Logan Eggleston, middle blocker Brionne Butler, setter Jhenna Gabriel and libero Sydney Petersen — could be the lineup that UT trots out against Northern Iowa. With defensive specialist Claire Hahn factoring into the mix, the White team mostly stuck with that lineup for the scrimmage’s first half. The Longhorns then tinkered with the teams’ personnel during the final two sets.

A three-time All-American, White led the Longhorns with a scrimmage-high 16 kills and 10 digs.

“I thought today, for only being together for about a week, it was a pretty good performance on both sides,” UT coach Jerritt Elliott said. “I liked what I saw. A lot of things to clean up, but for this point of the season, we did some nice things.”

Texas is set to return 11 players from a 23-win team that was ousted by BYU in a regional final. Saturday’s scrimmage, however, gave fans their first glimpse at Fields and and fellow freshman Molly Phillips.

The 6-foot-2 Fields collected seven kills and had a .583 hitting percentage over her first two sets on the White team. Phillips started the scrimmage as an Orange middle blocker but eventually moved over to the White side. Phillips, a 6-5 native of Mansfield, finished her day with six kills and four blocks.

Texas was regularly playing three true freshmen at the end of the 2018 season. That bodes well for Fields, who shared the Big 12’s preseason freshman of the year award with TCU outside hitter Audrey Nalls. The Longhorns, though, have redshirted a highly touted middle blocker — Butler in 2017 and Asjia O’Neal in 2018 — in each of the past two seasons.

On Saturday, Elliott said the latter trend won’t continue this fall. He noted that his team is talented but not as deep as it has been in past years. He also said Phillips is blocking better than a typical freshman.

“I think she’ll contribute this year. We’re going to need her,” Elliott said.

Saturday’s scrimmage was also a showcase for a few of Texas’ exes. Cat McCoy, the program’s all-time leader in digs, suited up alongside Khat Bell and Kat Brooks, both of whom played for Texas’ 2012 national championship team, on the Orange team. Former Texas All-Americans Chiaka Ogbogu and Ebony Nwanebu were in attendance Saturday, but neither played. One year after her senior season with 111 blocks, Morgan Johnson was also spotted at Gregory Gym.

Notes: Junior setter Ashley Shook sat out Saturday’s scrimmage with an ankle injury. Elliott was hopeful that Shook can return by UT’s first match. … Texas will scrimmage LSU in Houston next weekend. … Over three sets with the White team, Gabriel recorded 26 assists.