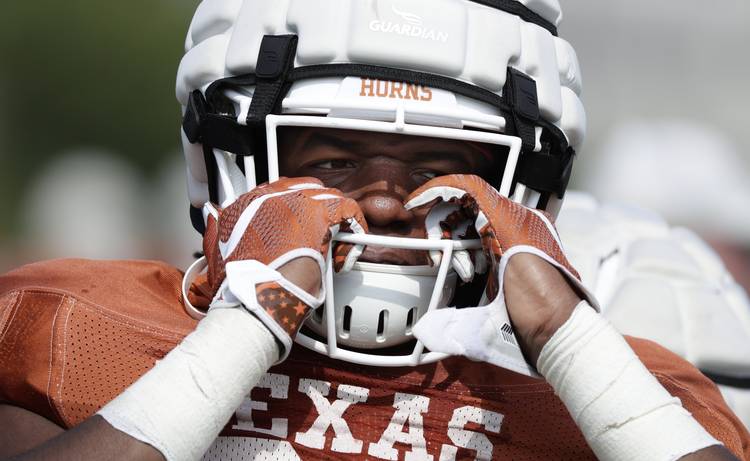 Texas running back Keaontay Ingram is expected to be ready for the season opener. (AP Photo/Eric Gay)

“All on track,” Herman said after Saturday’s practice. “Caden’s probably the fastest. If everything goes great, maybe by the end of this week. Those other two guys are expected (to be cleared), if everything goes to plan, the Tuesday of game week.”

The coaching staff will face a key decision early next week about Ingram, though. If team doctors believe the sophomore will be OK, then coaches feel good about the running back depth of Ingram, freshman Jordan Whittington and junior Daniel Young for the opener.

If Ingram’s health doesn’t improve, Herman said, coaches will probably design a few plays for freshman receiver Jake Smith. “Something to get you out of a game if a bomb blew up,” Herman said.

“You can’t jog four of them out there,” Herman said. “So, yeah, it’s still a battle, probably going to be a battle through next week, I would imagine.”

All in all, these are relatively minor things compared with previous August wackiness. Herman was even sanguine about Saturday’s scrimmage, won by the offense.

“It was close, but we had too many penalties,” the coach said. “We’ve got to get some stuff cleaned up; we’ve got to play the ball better in the air. We had two pass interference calls and three or four offside that we got to get cleaned up.

“But the good news is we have two weeks to do it,” he added. “We’ll practice in helmets tomorrow, and Tuesday we’ll introduce scout team and start preparing to win a game.”

Freshmen to watch: Thanks to redshirt rule changes, the coaching staff has taken an aggressive approach to getting freshmen on the field in limited roles to gauge long-term viability.

Last season, the NCAA changed the rule on redshirts. Players may now participate in four games or fewer and still keep their redshirt designation. Defensive tackle Keondre Coburn played in three games last season and now will be a starter, for example.

“The fact I got to play and see how it is as a college football player was pretty awesome,” Coburn said.

No updates on Moore: Herman has made no decision on the playing status of receiver Joshua Moore. The sophomore from Yoakum was arrested and charged July 5 with unlawful carrying of a weapon, a Class A misdemeanor.

According to the arrest affidavit, a civilian employed by Austin police was monitoring surveillance video and observed a black man in a “track suit” at East Seventh and Trinity streets. He walked between two vehicles and appeared to chamber a round.

Responding officers arrived and identified Moore, who was arrested with a Glock handgun and a 30-round magazine and had a live round loaded in the chamber. Moore does not have a license to carry a handgun. A late August court date has been pushed to September.

Herman said Moore informed the coaching staff about the incident, and the coach previously issued a statement that he would monitor the legal process. One of Herman’s five core values is no guns.

“The core values are the core values,” Herman said. “But if we kicked everybody off the team for being dishonest or for a first positive drug test or whatever, we’re in the business of teaching. And so like I said in the statement, we’ll let the legal process play out and handling the punishment internally and teach.”

Season ticket record: It’s long been thought the previous season ticket record was about 60,000, set in 2010. School officials pressed the ticket office for details, and after scrubbing the numbers, it was determined the actual record is 62,737.

This year, Texas athletics has sold 62,645 season tickets, putting the football program within a fraction of an official record and close to 63,000. One school official told the Statesman on Saturday that 63,000 is the final cutoff as ticket inventory is needed for other groups.

“I want to thank (fans) for believing in us and what we’ve got going and where we’re headed,” Herman said. “I think it’s also a testament to (athletic director) Chris Del Conte and his crew for making game days an experience around here, an all-day event that people want to come be a part of.”

Horns host families: The football program held a closed scrimmage for all players’ parents and then a luncheon Saturday with classes set to resume later this month.

“Largest turnout for family day yet!” Herman’s wife, Michelle, tweeted. “Thank you parents for making the trip to Austin. Your support means everything to us!”

The Longhorns have been rocketing up the recruiting rankings for 2020 and now have 11 commitments on the Statesman’s Fab 55 list. The recruiting class overall ranks sixth nationally, according to 247Sports.

Herman complimented his recruiting department, led by Derek Chang and Bryan Carrington, and his coaching staff.

“I mean, we’re selling a great product,” Herman said. “We’re selling the ability to get a world-class education, compete for championships, be developed and lay some roots down in the city of Austin.”

Correction: A previous version of this story said Joshua Moore’s arrest happened on Aug. 1. It was July 5.