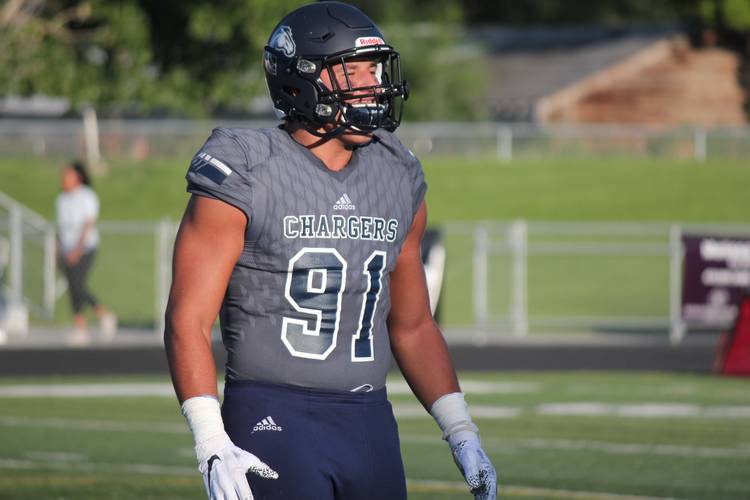 DRAPER, Utah — Corner Canyon defensive end Van Fillinger bugged his mom the entire summer before the third grade, begging to play football. The family had moved to Utah from Arizona a year before and his mom, Janel, missed the sign-ups the previous summer. Van stayed persistent, asking his mom every week if she’d remembered to register him for the season. He never wanted to miss another chance to play football.

“I just wanted to hit someone and my friends were playing,” Fillinger remembers.

Fillinger, a 6-3, 255-pound defensive end who committed to Texas on July 18,  hasn’t stopped hitting players since.

Fillinger, a national top-400 prospect, is the third-ranked player in Utah. He chose Texas over Oregon, mostly because of the Longhorns’ odd-man defensive front. Oregon wanted the  three-star lineman to play defensive tackle.

“The defense Texas runs with the odd-man front will help me. I do something similar to the 4i position here at Corner Canyon,” Fillinger said. “I can play up and down the line of scrimmage, but I liked the idea of staying leaner and playing defensive end than gaining a bunch of weight to play defensive tackle in a four-man front.”

Fillinger and his Corner Canyon teammates are the state’s defending Class 5A state champions. The Chargers started the season with a win over defending Class 4A champion, Orem, 30-14. Fillinger supplied constant pressure, soaking up double teams against the run. It was a preview of his future role at Texas.

The impressive part of his game is his motor. Most prospects his size wear down in the fourth quarter. That’s when Fillinger played his best football. It’s a testament to his dedication in the weight room.

That drive and love for the game is something his mother noticed in him at a young age.

“He was all about it as soon as we got him on that football field,” she laughed. “It was a good decision.”

Fillinger didn’t arrive at Corner Canyon as a can’t-miss prospect. He was 5-11, 150 pounds. He’d grown to 6-2, 210 by his sophomore season. His head coach, Eric Kjar, had a front row seat for the development.

“His practice habits are crazy. It’s like having an extra defensive coordinator,” Kjar said. “He’s a high-effort kid who doesn’t take plays off, which is rare for big guys with his ability. Halfway between his sophomore and junior year he started coming around physicality. His sophomore year he showed flashes, but his dedication in the offseason started to pay off as he started looking the part and reaching his potential.”

The improved play and bulked up frame caught the eyes of recruiters, as Utah State became his first offer before his junior season. It was a life-long dream realized for him.

“It was surreal when the colleges came calling,” Janel Fillinger said. “He always said it was his dream, but as a mom, you look at the statistics and brush it off. He was so excited to get that first offer.”

His recruiting profile blew up after his junior season with power programs like Texas traveling to Utah to see the high-upside defensive end. Distance wasn’t a factor for Fillinger. He realized that his dream likely would lead him to another state, and his mom was on board. The decision came down to vibes.

“Texas stayed in constant contact with me. I had great conversations with coach (Oscar) Giles and he showed me that Texas cared about me as a person and not just a football player,” he said. “The program is on its way up after that Georgia win in the Sugar Bowl.”

It was a selling point that his mother loved.

“It wasn’t up to me to make this decision. I told him I’d help with the research, but this was his life,” she said. “Texas made him feel like a human, and not just a football player, and as a mom, that was big. I was happy with the college he picked and I trust him with those coaches.”

His head coach also noticed the attention that Fillinger was paid on visits. He took two to Texas before he committed, and Kjar knows Austin sealed the deal.  The city of Austin, and the culture of Texas football, played a huge role in landing him.

“The visits were huge for Texas,” Kjar said.

“I loved the people on the team and thought I fit in well,” Fillinger said. “I wanted to be at a school that rallied around football because I love football.

At Texas, Cedric Benson was a burnt-orange star, right alongside UT’s Heisman greats