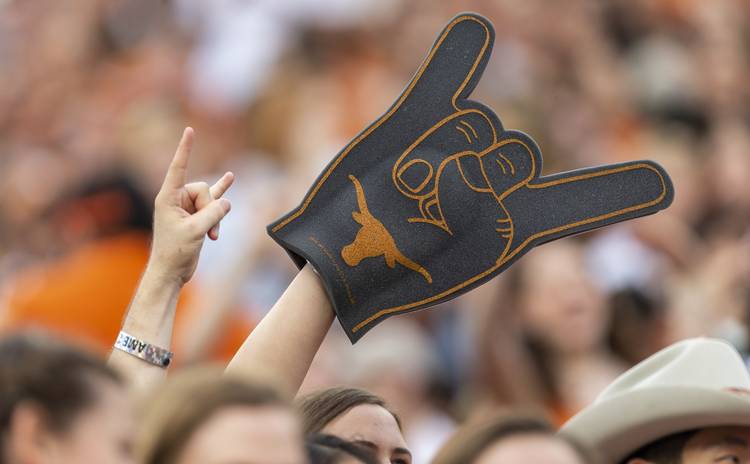 What’s that buzzing sound that Longhorns fans are hearing this month? Bees? Construction?

The Longhorns, accompanied by plenty of hype, enter their third season under head coach Tom Herman. Texas is  coming off its first 10-win season since 2009. The Longhorns beat Georgia 28-21 in the Sugar Bowl and finished ninth in the Associated Press’ final poll.

Texas should eye a Big 12 title this season, quarterback Sam Ehlinger is legitimately a Heisman Trophy candidate, and another 10-win season doesn’t seem out of the question.

Here’s a look at what lies ahead on the schedule:

The good news for Texas is that Maryland opens its season against Howard. Stunned by mediocre Terrapins teams in each of the last two openers, the Longhorns need a better beginning this year. Texas is 12-3 over its last 15 season openers, including 12-1 at home.

If you’re looking for opening-game drama, somehow this matchup will have some. While speaking to a crowd of Louisiana Tech fans earlier this year, NFL Hall of Famer — and former Bulldogs quarterback  —Terry Bradshaw opined that Texas’ Ehlinger “ain’t that good.” Ehlinger responded with apathy, but the play of the junior quarterback could speak volumes.

Texas will be a heavy favorite in its first-ever meeting with Louisiana Tech, but it may be wise for the degenerates to take the points. Two years ago, Louisiana Tech dropped a one-point decision to South Carolina. LSU beat the Bulldogs 38-21 in 2018, but Louisiana Tech pulled to within three points with 12:57 left in the fourth quarter.

Barring an unexpected upset during the season’s first weekend — LSU hosts Georgia Southern — this could be one of the hottest tickets of the season.

In the American-Statesman’s preseason poll, LSU and Texas were respectively ranked sixth and ninth. Since Texas beat LSU in the 2002 Cotton Bowl, the Tigers have gone 4-0 against Big 12 teams. Texas has split its last four games against SEC schools, but its last two seasons have ended with bowl wins over Georgia and Missouri.

LSU welcomes back 16 starters, including quarterback Joe Burrow, who threw for 2,894-yards. In an alternate universe, Herman may be coaching Burrow. Texas fans will recall Herman flirting with LSU before getting hired at Texas in 2016. Herman also recruited Burrow to play at Ohio State while he was the Buckeyes’ offensive coordinator (Burrow left Ohio State after the 2017 season as a graduate transfer).

The final tuneup before the start of Big 12 play. This is the first time Texas will play at NRG Stadium since it closed out Herman’s first season with a 33-16 beating of Missouri in the Texas Bowl.

Offensively, the Owls lost their two leading rushers and need to break in a new quarterback. The team returns six starters to a defense that allowed 36.0 points per game.

When it comes to orange, bright has mostly bested burnt over the past decade.

Oklahoma State’s 38-35 win last year in Stillwater was its fourth straight win in this series. The Longhorns haven’t beaten the Cowboys in Austin since 2008.

Either redshirt freshman Spencer Sanders, a four-star prospect out of Denton, or one-time Hawaii starter Dru Brown will lead an offense that ranked 13th last year in scoring (38.4 ppg). The new quarterback will inherit two weapons in running back Chuba Hubbard and wide receiver Tylan Wallace. Both made the Big 12’s preseason team.

Texas is the fourth game on Oklahoma State’s schedule, but its first test. The first three games are against FCS-level McNeese State and Oregon State and Tulsa teams that went 5-19 last year.

Last year’s showdown between these two schools featured a controversy (Horns Down, anyone?) and a last-second 2-point conversion that lifted West Virginia to a 42-41 win. The Mountaineers, however, are expected to take a step backward this fall. Why? Their coach, quarterback, top four pass catchers, best offensive lineman, leading tackler and an all-conference defensive back all departed during the offseason.

New coach Neal Brown does have running back Kennedy McKoy, who compiled 149 yards of offense against Texas last year. Martell Pettaway, who burned UT for 121 rushing yards and two touchdowns, is also back. And quarterback Austin Kendall is another possible weapon following his transfer from Oklahoma.

Texas will travel to Morgantown following its first bye of the season. In his coaching career, Herman is 3-1 in games following a bye.

Will the story of UT’s season feature one or two chapters about the Sooners? Texas beat Oklahoma in last year’s regular-season Red River rivalry game, but the Sooners got their revenge in the Big 12 championship game. This year, the Sooners and Longhorns were picked first and second in the Big 12 preseason poll.

UT defensive coordinator Todd Orlando has had to scheme for Heisman Trophy winners Baker Mayfield and Kyler Murray the last two years. Will Alabama transfer Jalen Hurts be the third? The Longhorns also will worry about the return of two 900-yard rushers in Kennedy Brooks and Trey Sermon. And  then there’s dynamic wide receiver CeeDee Lamb and all-conference tight end Grant Calcaterra. The Sooners averaged 48.4 points per game last season, best in the nation.

This game may feature the top offensive and defensive talents in the Big 12. Ehlinger, who has accounted for 11 touchdowns in his three career games against OU, is the Big 12’s preseason offensive player of the year. Oklahoma linebacker Kenneth Murray was the conference’s top defender.

Counting down to basketball season likely will already have begun in Lawrence by mid-October, but that doesn’t mean there’s not a reason to pay attention to Kansas football. The Jayhawks haven’t posted a winning record since 2008, but running back Pooka Williams Jr. is back from his 1,125-yard freshman season debut. Kyle Thompson is the punter on the Big 12’s preseason team.

Almost three years since his departure from LSU, Miles is back on the sidelines. And he’s already turned around a Big 12 team before — Oklahoma State won six games only once from 1989 to 2000, but Miles accomplished that feat three times from 2001-04 — and he sees similarities in his newest project. “I think (Kansas is) ready to put a quality team on the field, and I think there will be some similarities in that Oklahoma State experience,” he said at Big 12 media days.

Kansas’ hiring of Miles did cost the Longhorns one fan. This summer, former UT swimmer Smacker Miles told the American-Statesman that she’d have to root for her dad in the Texas-KU matchup. “My blood, sweat and tears are in that Texas pool, but my heart is on the field for Kansas,” said Miles, whose two brothers also transferred to Kansas this offseason.

Texas finally broke through against TCU last year, the 31-16 home win snapping a four-game losing streak to the Horned Frogs. One season later, we’ll see if the Longhorns can find the same success in Fort Worth; Texas has not only lost its last two times at TCU, but has lost by a combined score of 74-14.

Texas’ secondary should be tested, but then again, questions remain over who’ll be throwing passes to Jalen Reagor. At Big 12 media days in July, TCU coach Gary Patterson still was deciding between six quarterbacks. Texas saw two of those quarterbacks last season — TCU junior Mike Collins and graduate transfer Alex Delton, who was at Kansas State.

TCU placed two defenders — lineman Corey Bethley and cornerback Jeff Gladney — on the Big 12’s preseason team. The Horned Frogs have ranked either first or second in the Big 12 in scoring defense in three of the last five years; Texas was one of six teams last season that scored more than the 23.1 points that TCU allowed.

Longtime Kansas State coach Bill Snyder has retired, and the Wildcats program now is run by Chris Klieman, who’s coming off a successful stint at North Dakota State with four FCS titles in a five-year span. He’s 1-0 against Big 12 teams, as his Bison beat Iowa State back in 2014.

Klieman has an experienced quarterback (Skylar Thompson) and an all-conference defensive end (Reggie Walker) to work with. But he’s mostly starting from scratch. Kansas State’s leading receiver from last year is now at Mississippi State. Thompson is the only player on the roster who gained a rushing yard for the team in 2018.

After going 5-7 last season, Kansas State was picked to finish ninth in the Big 12 preseason poll.

Back in 2016 — just ahead of Matt Campbell’s first season at Iowa State — the Cyclones were picked ninth in the Big 12 preseason poll. This year, the Cyclones were picked to finish third. But the media’s opinion of the program isn’t the only third that has changed in Ames.”I think one of the greatest things that’s been known when I first got to Iowa State, all of the questions were what color uniforms are you wearing, what’s your entrance song?” Campbell said at Big 12 media days. “People cared about stuff that really doesn’t matter, and now we’re talking about a football team, we’re asking football questions, and we’re concerned about what’s really important.”

Big things will be expected from a defense that allowed 22.9 points per game, the best mark in the conference. Defensive linemen JaQuan Bailey and Ray Lima, linebacker Marcel Spears Jr., and defensive back Greg Eisworth were all voted onto the Big 12 preseason team.

Iowa State, which went 8-5 last year, lost its leading rusher and receiver to the NFL. Sophomore quarterback Brock Purdy is back after throwing for 2,250 yards and 16 touchdowns over his eight starts. The worst of those was his 10-for-23, 130-yard performance against Texas.

A matchup of the last two Texas Bowl winners. The Longhorns will look to extend their four-game winning streak over the Bears, but three of the last four meetings have been decided by seven points or less, so drama should be expected in Waco.

After going 1-11 in 2017, Matt Rhule’s debut season, the Bears improved to 7-6 in 2018. Defensive lineman James Lynch and linebacker Clay Johnston will anchor the defense. And third-year quarterback Charlie Brewer has the luxury of throwing to one of the conference’s top receivers in Denzel Mims. Baylor gets Texas the week after it hosts Oklahoma, so that two-game stretch could tell us how far the Bears have come.

In last year’s 23-17 win in Austin, an opening-drive injury to Ehlinger took him out of the game. It also ruined a Westlake-Lake Travis quarterbacks storyline between Ehlinger and Brewer. An injury also sidelined Ehlinger in the 2017 game as well as the last time that Ehlinger’s Westlake team and Brewer’s Lake Travis team met in high school.

After spending last Thanksgiving in Lawrence, the Longhorns will spend the holiday in Austin. The Red Raiders visit on Black Friday in what will be new Texas Tech coach Matt Wells’ introduction to the series. Wells, who was hired last November to replace Kliff Kingsbury, spent the last six years at Utah State. He was Orlando’s boss there from 2013-14.

Only 15 teams scored more often than Texas Tech last year. One of those, though, was Utah State (47.5 ppg). The Red Raiders averaged 37.3 points per game and the school’s two top passers — Alan Bowman and Jett Duffey — are back. (Duffey also was Texas Tech’s leading rusher). Bowman threw for 605 yards in one game against Houston, but his freshman season was cut short by a partially collapsed lung in a 51-46 loss to Oklahoma.

For the ninth straight season, Texas Tech allowed more than 30 points per game. All-conference cornerback Adrian Frye is among the defense’s returnees.

Notable storylines, milestones to follow for Texas football this season