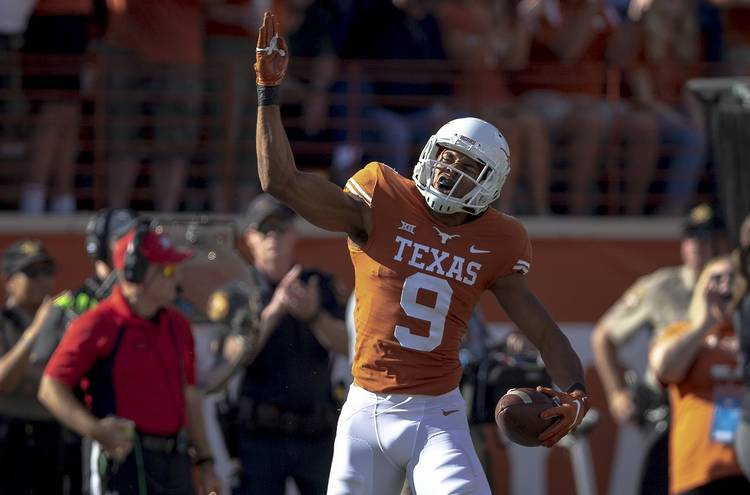 Earlier today, we took a tour of Texas’ 2019 schedule, game by game. Here are some notable storylines and milestones to follow this season:

Senior wide receiver Collin Johnson has 150 catches and 2,065 receiving yards for his career. Both of those rank ninth all-time at UT. Next on the lists are Jordan Shipley’s 248 catches and Roy Williams’ 3,866 yards.

Johnson would have to crush the school single-season yardage mark by nearly 320 yards. It’s far more plausible that he records the third 100-catch season in school history.

Colt McCoy’s career passing record of 13,253 yards is safe — and might not even be challenged next season.

Only four UT receivers have caught a touchdown pass in at least five straight games. In the past three seasons, Lil’Jordan Humphrey, Collin Johnson, Armanti Foreman and Devin Duvernay have all scored in three straight games. And Humphrey did it twice.

Every one of the five teams Texas will face from Rice to Kansas allowed at least 22 touchdown passes in 2018.

Only 16 UT freshmen have rushed for 500 yards in their first season. Only three have topped 500 receiving yards. Could the much-hyped Jordan Whittington or Jake Smith challenge those marks?

Texas has dropped its last four games against Oklahoma State, but a loss to the Cowboys in Austin on Sept. 21 would be truly historic. Texas losing to a school five times in a row has happened only nine times in school history, dating back to 1893.

Oklahoma has logged five straight wins over Texas three times. And Texas A&M, Rice, SMU, Colorado, Kansas State and Notre Dame have won five straight against UT as well, though the last three schools on that list didn’t do it in five consecutive years.