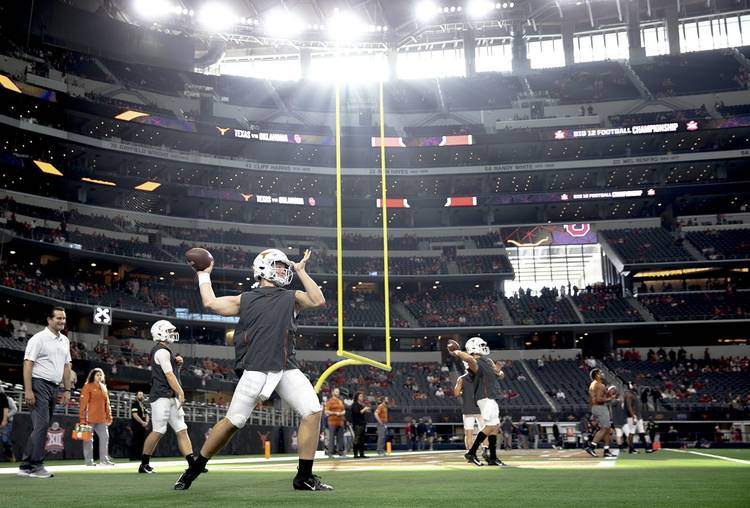 Surveying the national college football landscape with a six pack of lists:

(According to consensus Vegas odds)

Clemson (2.2-to-1): It’s splitting hairs trying to separate the Tigers and Tide, who’ve taken turns alternating titles the last four years. Give Clemson the edge because it’s a lot easier navigating the ACC than the SEC. The Tigers skill positions are more dynamic; the Tide offers better depth and up-the-gut power. Take your pick.

Georgia (6.5-to-1): The Dawgs, in 2018, were the only program since 2010 to unseat Alabama as the national recruiting champ, and they’ve been agonizingly close to the Crimson Tide in the last two SEC title games. Georgia returns the same number of starters and overall production as the two teams listed above them. Can they break through?

Ohio State (12-to-1): The Buckeyes are trying to replace an Urban legend. Early reports on Ryan Day, the QB guru-turned-head-coach, are positive. On talent alone, OSU is one of the few that can stand up to those two bullies, with recruiting classes ranked 2, 2 and 4 making up the bulk of the roster. But new QB Justin Fields better be a quick study.

Michigan (14-to-1): Are the Wolverines over-rated again? Quite possibly. They’ve been a money pit for those who’ve bet on them in big games. Their defense remains salty except when it really matters. They won’t threaten for a playoff spot unless they can snap a seven-game losing streak to Ohio State.

Oklahoma (15-to-1): All credit to Lincoln Riley, who took a good thing Bob Stoops gave him and made it better, posting back-to-back final four appearances. Yet this quarterback magic act must run out sometime. Is it telling that Jalen Hurts hasn’t won the job yet against freshman Spencer Rattler?

Knockin’ on the door

LSU: The Tigers are loaded. Sixteen starters return, eight on each side. LSU has had more early departures to the NFL than anyone but lost just three players this year (as opposed to seven last year). Toss in a competent QB, Joe Burrow, and the right mix is there.

Oregon: The Pac-12 has only appeared twice in the CFP, the least of the Power Five. That’s because the Pac-12 is the weakest of the Power Five. It also invites opportunity. The Ducks, who reached the first title game in 2015, are in a great spot to take advantage. They return 17 starters, including star QB Justin Herbert, a premier offensive line and No. 1 overall recruit, pass-rush terror Kayvon Thibodeaux.

Texas: The Sugar Bowl thrashing of Georgia (not as close as the score indicated) was proof positive they can finally hang with the big dogs. The offense could be spectacular. One giant red flag: UT’s eight returning starters are tied for the fewest in the country. The defense is being rebuilt on the fly across the board. Trust DC Todd Orlando to speed up the process.

Florida: What’s been missing in Gainesville for years was the offense, and Dan Mullen brought it back in his first year, the Gators averaging 35 points a game. QB Feleipe Franks is improved, and skill-position speed was never in question. Defensive playmakers must be replaced.

Utah: The Utes’ stout defense won the Pac-12 South last year and should take advantage of the weaker division again. The schedule starts with BYU, Northern Illinois and Idaho State and includes just four trips outside the Beehive State.

Notre Dame: The Irish went 12-0 in the regular season and made the playoff, backing up a 10-win 2017. That’s 22-4 for those counting. QB Ian Book is smart and accurate, and DEs Julian Okwara and Khalid Kareem will be one of the country’s best bookends.

Listed according to consensus Vegas odds. Note: Kyler Murray, last year’s winner, wasn’t even on the board until preseason camps opened.

Tua Tagovailoa (3-to-1): Alabama’s smooth slingin’ QB already has won two SEC titles, one national championship, Sporting News player of the year, finished atop the NCAA pass efficiency charts and is everyone’s early choice as the NFL’s No. 1 overall draft pick next April.

Justin Fields (9-to-1): A leap of faith to make the new Ohio State sophomore QB, a transfer from Georgia who’s thrown all of 39 passes, the third choice, but oddsmakers love his five-star pedigree and sterling surrounding cast.

Jalen Hurts (12-to-1): The Channelview native, a two-time SEC winner and national champion, lost the QB job to Tagovailoa at Bama, so he’s moved on to Heisman U. Oklahoma could be the first school to field three consecutive Heisman winners.

Adrian Martinez (14-to-1): Wait a second. Didn’t Nebraska go 4-8 last year? Yep, but Martinez shined as a freshman QB, completing 64.6 percent of his passes, running for 629 yards and emitting a certain swagger that said, “look out, I’m coming.” He’s a wizard with the ball.

Sam Ehlinger (17-to-1): Several players, including Georgia QB Jake Fromm and Wisconsin RB Jonathan Taylor, have similar odds, but the Texas QB from Westlake is the hard charger drawing the most summer action in Vegas. A 25-to-5 TD/INT ratio and 16 rushing scores are attention grabbers.

Texas A&M: Jimbo Fisher said hello to College Station with a 9-4 team that outlasted LSU, nearly beat Clemson and closed with four straight wins. His first full recruiting class ranked fourth nationally. Kellen Mond is one of the country’s most exciting QBs. The Aggies are in good hands, especially once the defense gets up to speed. Yet buyer beware: Trips to Clemson, Georgia and LSU and a home date with Alabama tamp down expectations for a true breakout.

Baylor: Without being too harsh on the Big 12, let’s just say there’s plenty of growth potential. Third place is wide open. Why not the Bears? If Baylor handles Iowa State in Waco on Sept. 28, it has a great shot at a 6-0 start.

Nebraska: The Cornhuskers started 0-6 in Scott Frost’s debut but finished 4-2 and pushed Ohio State hard in Columbus. The non-conference schedule is easy and the Huskers don’t face either Michigan team or Penn State.

Tennessee: The Vols’ rebuild from 2-6 SEC, 5-7 overall is about to get a kick-start. The program has recruited well, even in recent lean years, and 91 percent of the total offensive production and nearly 80 percent of the defense are back.

Texas State: Buy low, sell high, right? Here’s a hunch that former A&M offensive coordinator Jake Spavital will turn it around, starting immediately with a team that ties UCLA for the most returning starters with 19 and plays in the soft side of the Sun Belt.

Washington: Let’s be clear, the Huskies won’t fall off the map. But the fierce defense that keyed 32 wins over the last three seasons has been gutted. Seven all-conference choices, five-first teamers, are gone. So is a four-year QB and RB. This looks like a regroup year.

West Virginia: Neal Brown was a great hire — why didn’t Texas Tech pursue its former offensive coordinator? — but he’s facing a major rebuild. The Mountaineers figure to be battling the Kansas teams at the bottom of the Big 12.

Kentucky: Oh, that 10-3 season of a year ago will seem such a distant dream for a team whose impact players have all left and just eight starters are back in the fold.

Georgia Tech: Paul Johnson was a wonderful coach who had a good thing going for a long time with his option attack. But the Yellow Jackets have fallen on hard times, and Geoff Collins comes from Temple to begin what could be a lengthy reconstruction.

Ole Miss: The Rebels, beset by NCAA investigations and instability, haven’t had a winning season since 2015 and that won’t change in ’19. They are picked last in the SEC West.

UConn: What a disaster. Is there a worse program than the Huskies? An 18-55 record over the last six years, and now word that they’re going independent as they move from the AAC to the football-less Big East. Just drop the program.

Chase Young (DE, Ohio State): Early NFL mocks have the next-in-line of the Buckeyes’ endless pass-rush stars as the first defensive player off the board next April. Young had 16 QB pressures, 14.5 tackles for loss and 9.5 sacks in 2018.

Derrick Brown (DT, Auburn): A 320-pound run stuffer who also creates plenty of push into the pocket on pass plays.

Alabama’s wide receivers: Jerry Jeudy (68-1,315-14) triggers a group that’s as deep as it is incredibly talented. Scouts have Jeudy pegged as a top-five overall pick next April. Joining him are Henry Ruggs, DeVonta Smith and Jaylen Waddle, among others.

LSU’s defensive backs: By the NFL numbers, Ohio State is the real DBU. But LSU is a close second, and this group will elevate that status. S Grant Delpit and CB Kristian Fulton are preseason All-Americans. CBs Kary Vincent Jr. and Derek Stingley Jr., plus FS JaCoby Stevens also shut it down.

Oregon’s offensive line: The Ducks have the oldest, best O-line in the country. Their group blows away everyone in experience with 153 starts. Three of them — Shane Lemieux, Calvin Throckmorton and Penei Sewell — are projected to go in the first two rounds.

Clemson’s wide receivers: The Tigers wideouts made Alabama’s secondary look silly in the national title game, and everyone but Amari Rodgers (torn ACL) is back. Justyn Ross is a man among boys and a constant home-run threat. Tee Higgins also has speed, moves and aerial ability.

Penn State’s linebackers: Truth is, Alabama’s group is hard to beat, but the Nittany Lions’ Linebacker U monicker lives with Micah Parsons igniting a group that includes hitters Cam Brown and Jan Johnson.

Coaches on the hot seat

Clay Helton (USC): Many Trojans fans wanted him out after last year’s 5-7 crash and burn. Too many stumbles against a difficult early schedule with Stanford, Utah, Washington and Notre Dame could elevate the groaning to loud roars. But at least he re-hooked five-star WR Bru McCoy to try to save him.

Gus Malzahn (Auburn): After a trip to the national title game in his 2013 debut season, Malzahn has only had one year with more than eight wins. A 28-20 SEC record doesn’t impress, either. Especially in Saban’s state.

Bob Davie (New Mexico): Who knew the former Notre Dame boss was still coaching? It’s a wonder why, with back-to-back 3-9 campaigns and a 17-39 Mountain West record.

Lovie Smith (Illinois): No lovey dovey in Champaign for the former Chicago Bears honcho. With a 9-27 record, he likely needs to turn it around in year four.

Matt Luke (Ole Miss): The loyal alum is well liked, but Rebels fans want to win games, too. Luke is 4-12 in SEC play. That’s not gonna cut it.