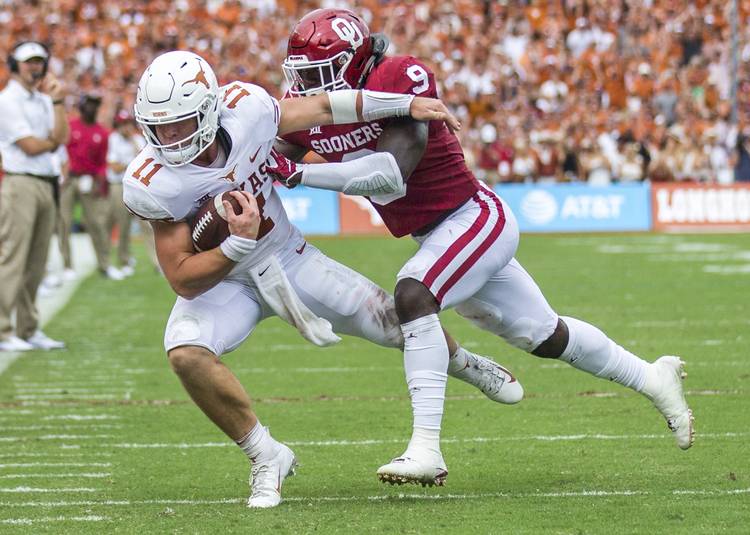 Texas Longhorns quarterback Sam Ehlinger (11) is tackled by Oklahoma linebacker Kenneth Murray (9) in last year's game at the Cotton Bowl. Both earned preseason Big 12 offensive and defensive player of the year recognition this summer, and both have landed spots on our Big 12 of the Big 12 list. (Ricardo B. Brazziell/American-Statesman)

The best player in the Big 12 could be Texas quarterback Sam Ehlinger, the guy who has been favorably compared to Tim Tebow, SEC royalty, for his on-field passion and instinctive power.

Or maybe it’s Oklahoma’s Jalen Hurts, the one-time best offensive player in the SEC who transferred to the Sooners in hopes that a sprinkle of Big 12 magic can transform him into the top quarterback in the country.

At least in the preseason, Ehlinger tops Hurts in the American-Statesman’s annual Big 12 of the Big 12, which identifies the dozen best players in the conference regardless of position. Ehlinger gets the preseason nod because the Longhorns star knows how to thrive in a league featuring zany, accelerated offenses.

Hurts won 26 times as the starter at Alabama and reached three national championship games. But this season will prove whether he was more of a game manager under disciplined Nick Saban or a big-play creator directed by the Sooners’ Lincoln Riley.

Ehlinger is a junior who’s in his element, playing in his hometown of Austin. He scored three touchdowns to lead the Longhorns to a Sugar Bowl victory over Georgia for the team’s 10th win last season. This preseason, the word “we” is heard often when Ehlinger discusses what’s ahead.

“What excites me, everything,” Ehlinger said of the offense. “From the speed, the athleticism, the offensive line, the running backs, nearly every position on our offense I’m really excited about. The talent is there. Every position has extreme talent. Now that we have that talent, what are we going to do with it? I think the sky is the limit.”

UT fans haven’t been this delighted with a quarterback in a decade, not since Colt McCoy directed Texas to the national title game after the 2009 season.

Coincidentally, Ehlinger has pinned a photo of McCoy and himself on his Twitter page, describing the former Longhorn as his “childhood hero.”

Meanwhile, Hurts is the senior, also a native Texan and the son of a high school coach who was so confident and talented that he started as a freshman in Tuscaloosa. Hurts graduated from high school early to enroll for his spring semester at Bama. He turned down a last-minute recruiting pitch from former Texas A&M coach Kevin Sumlin, who was trying to replace Kyler Murray, who had transferred to OU.

Hurts was the toast of the SEC for most of his first two seasons, keeping defenses off balance with his running ability in Saban’s disciplined offensive approach. But after he lost his starting job to Tua Tagovailoa, last year’s Heisman Trophy runner-up, Hurts graduated so he could spend his final season at OU, the school of the past two Heisman winners and No. 1 picks of the NFL draft.

In a case of football serendipity, Hurts is replacing Murray.

Hurts’ two main worries were absorbing the new offense and winning over his OU teammates. Reports out of Norman say he’s always the final Sooner to leave the field.

A recent digital clip posted to ESPN’s college football Twitter account to hype the upcoming season showed how much the OU players adore Hurts. He’s seen lifting an incredible amount of weight as a dozen OU players cheered him on. At last count, the video was seen close to a half-million times.

Will Hurts be the third consecutive Sooners quarterback to win the Heisman after Baker Mayfield and Murray? He’s already one of the most popular players in the country, with 200,000 Twitter followers. The athlete marketing company Opendorse said Hurts leads all college players on Twitter in active engagements and is fourth overall for all of social media.

Riley hasn’t made any public predictions for postseason grandeur for Hurts. He said dealing with Hurts’ immense experience has been “different.”

“He brings game experience that Baker and Kyler did not have when they got here,” Riley said. “But also doesn’t have as much experience in the (OU) system. It has been quicker, but it’s been fun. He’s been eager. There have been things that we do that he’s been able to trace back … to different things that he’s done at Alabama or even in high school. So it’s not like you’re starting from scratch. It’s a fun process. He’s a smart kid. He’s eager and works very hard at it, and we have meshed together well.”

Baylor’s Charlie Brewer is the third quarterback on the Statesman’s list, coming in at No. 10. The former Lake Travis star wanted no part of a discussion on how good he is. But his last game, a Baylor win over Vanderbilt in the Texas Bowl, showcased his skills. He threw for more than 300 yards and rushed for 109 to earn the bowl’s offensive MVP honors.

If you’re looking for the best Big 12 player who isn’t a quarterback, check out Oklahoma State receiver Tylan Wallace, who morphed from bench guy to Biletnikoff finalist. Or maybe it’s Oklahoma’s CeeDee Lamb, who previously had to carve out an identity opposite Marquise Brown, an eventual NFL first rounder.

Iowa State’s JaQuan Bailey, at No. 5, is the highest-ranked Big 12 defender on the list.

Bailey’s 18½ career sacks are tied for best in Cyclones program history. Iowa State coach Matt Campbell could use Bailey’s maturation — he’s a former three-star prospect — as a microcosm of his entire overachieving team. Iowa State is predicted to finish third in the conference, just behind Oklahoma and Texas.

Bailey is a former three-star prospect. At last month’s Big 12 media days event, he was asked how he envisions celebrating when he breaks the record.

“I will celebrate with my team and then run to the sidelines,” Bailey said. “Or line up and get ready for the next play.”

Our initial list of the conference’s 12 best players heading into the 2019 season. Only two players on it — Texas quarterback Sam Ehlinger and Oklahoma State wide receiver Tylan Wallace — are repeat picks from our final 2018 list last December:

2. Jalen Hurts, Oklahoma QB: Alabama went 26-2 with Hurts as the starter, and he was the SEC’s offensive player of the year in 2016.

9. Kenneth Murray, Oklahoma LB: Generated double-digit tackles in nine games, including 28 in an OT win over Army and 15 in the semifinal loss to Alabama.

11. Pooka Williams Jr., Kansas: The Big 12 offensive freshman of the year rushed for 1,125 yards, including 252 against eventual Big 12 champion Oklahoma.