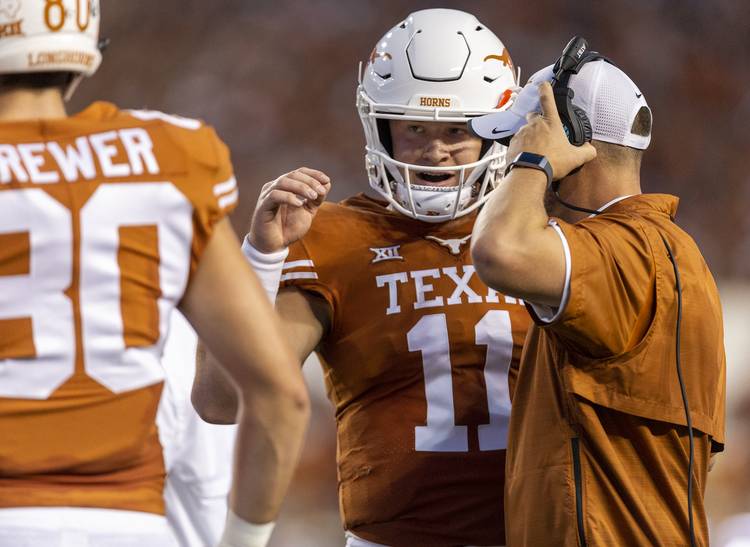 Texas will have a new leading rusher and receiver this fall.

While we’re at it, the Longhorns — who averaged 31.1 points and 411.3 yards per game last season — also will need a new starting tight end. Expect to see new names on the left side of the offensive line. Last year’s starting right guard? He’s gone, too.

But the offensive cupboard is not bare. Three returning starters — quarterback Sam Ehlinger (Walter Camp, Maxwell, Davey O’Brien and Wuerffel), wide receiver Collin Johnson (Biletnikoff) and center Zach Shackelford (Rimington and Outland) — are on notable preseason watch lists. There are five offensive starters in all. And running back Keaontay Ingram and offensive lineman Derek Kerstetter, both of whom will start this season, were used in key moments last year. And Texas brought in Parker Braun, an all-conference guard at Georgia Tech, as a graduate transfer.

Here’s where the Texas offense stands in term of roster and depth, by positions:

Sam’s the man, and that man threw for 3,292 yards and totaled 41 touchdowns last year. Those numbers doesn’t eradicate all of the questions about the quarterbacks, however. The Longhorns survived injuries to Ehlinger in each of the past two seasons, including twice last year against Baylor and Iowa State, thanks to Shane Buechele, the former starter. He had to replace Ehlinger for the rest of the game after Texas’ opening drive against Baylor, and later played the entire second half against Iowa State.

Herman has sung the praises of his two freshman backups, but the fact is neither has ever thrown a pass in a college game.

Ingram rushed for 708 yards in his first season, just behind Tre Watson’s team-leading 786. But this summer he has called his freshman year “highly disappointing” since his average rush didn’t exceed five yards. Many expected Whittington, a five-star athlete from Cuero, to get reps at slot receiver when he signed, but the early enrollee has wowed his teammates and coaches since moving to the backfield this spring.

Then there are the vets. Young trails only Ingram in career carries while Johnson is entering his fifth season. Ingram suffered a bruised knee bone in the first preseason scrimmage and Johnson has battled injuries since he arrived in 2015, so backfield depth could be a concern.

Texas shifted away from its previous philosophy of playing a steady rotation of receivers last season, so it will be interesting to see if that stays the same or changes this fall. The receivers depth chart, after all, is the deepest on this offense.

Johnson (68 catches for 985 yards and 7 TDs) and Duvernay (41-546-4) are coming off solid seasons, but Lil’Jordan Humphrey (86-1,176-9) led the team in catches, yards and touchdowns. He left school early for the NFL. Where Texas plays Duvernay could have a domino effect. He played at the Z spot — the second outside receiver position, opposite Johnson (Y) — last year, but moving him to Humphrey’s slot position, or H, will open up more playing time for Eagles at Z. But if that happens, might it block Smith, the 2018 national Gatorade player of the year, from seeing the field?

Texas will miss Andrew Beck, a two-year captain who emerged as a viable threat in the passing game last year. Brewer, though, does have experience (24 games) and the former Lake Travis standout caught a big touchdown pass at USC as a freshman in 2017. The other tight ends are all looking for their first college catches; Wiley, a three-star recruit from nearby Temple, went through spring drills and Herman said, “we’re planning on him playing some this year.”

Cosmi, after a solid showing at right tackle last year, will move over to left tackle as Texas looks for a replacement for Calvin Anderson. Okafor will get a chance to shine after redshirting last year, on the right side. And since Tom Herman’s first season, 2017, Kerstetter has been the only true freshman that has played on the offensive line. Johnson, though, was a four-star recruit who enrolled early.

Kerstetter and Angilau started fall camp as the two starters at guard, but it wasn’t expected to have to wait too long for Braun to find his spot. Over the last three years at Georgia Tech, he earned all-ACC honors twice. Kerstetter has started at tackle and guard in his career and he also can play center. Imade also has worked out on the defensive line, but he could be a find for the interior of the offensive line.

As he enters this fourth season as a starter, Shackelford will be leaned on as both an on-field contributor and a leader. Various injuries, however, have forced him to miss games in each of his first three seasons. Ghirmai is still learning how to play the position, so expect Kerstetter to slide over if Shackelford is ever sidelined at any point.

Dicker the Kicker endeared himself to UT fans last year when he nailed a 40-yard field goal to beat Oklahoma in the closing seconds. He also set school freshman records for field goals (18) and total points (105). Additionally, the Lake Travis product recorded 52 touchbacks and a 63.2-yard average on his kickoffs.

Understanding Sam: Family bond, passion for Texas fuels Ehlinger’s rise as the face of the Longhorns