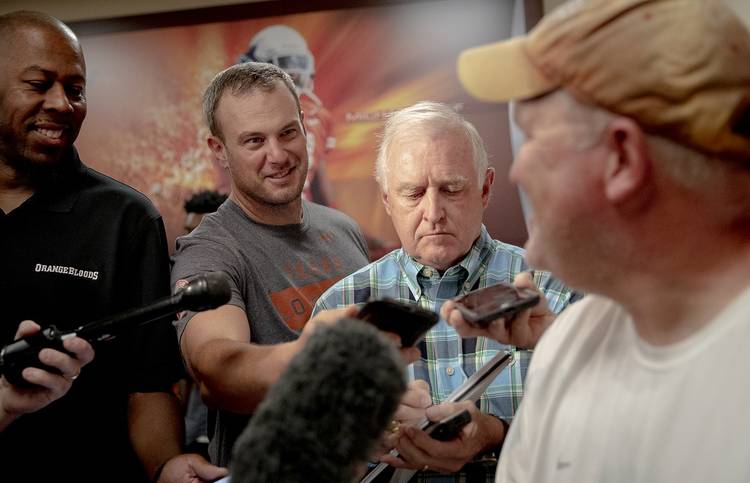 Derek Warehime has had the same employer for three straight seasons, but that doesn’t mean the Texas assistant coach hasn’t had to continually update his résumé.

Since his arrival ahead of the 2017 season, Warehime has held three different jobs. He was UT’s offensive line coach in 2017. He then shifted to tight ends in 2018. This year, he will continue to mentor the tight ends while also coordinating the Longhorns’ special teams.

One of eight assistants who met with the media on Thursday afternoon, Warehime said his shifting responsibilities haven’t been a problem. He had coached linemen (Arkansas-Monticello, Sam Houston State, Houston) and tight ends (Arkansas-Monticello, New Mexico) at previous coaching stops. He was a special teams coach for New Mexico in 2014.

Advertisement
“I’ve been prepared,” Warehime said. “It wasn’t like I was walking into a wide receiver room or a linebacker room or something like that, a position that I didn’t have any experience with. It certainly made the transition that much smoother, having that experience in the past.”

Warehime inherits an all-conference leg in Cameron Dicker, who hit 18 field goals last season. Punter Ryan Bujcevski also is back, and Warehime said that Justin Mader will handle the deep snaps on both field goals and punts (Mader split those duties with Jak Holbrook in 2018).

The moving of Warehime to special teams occurred after Craig Naivar was promoted to co-defensive coordinator. Naivar is also UT’s safeties coach. Todd Orlando will continue to call the plays on defense.

“The collaboration is the same,” Naivar said. “We’ve worked together for the last five years or whatever that’s been in a really good situation, so we’ll keep grinding on that.”

Walk-ons making a run: Due to some injuries in the backfield ,three walk-ons have been given an extended audition this month in front of running backs coach Stan Drayton. On Thursday, Drayton applauded the efforts of freshman Jarrett Smith, sophomore Jaren Watkins and senior Mason Ramirez.

Level Up: Stripe off for Jaren Watkins. #ThisIsTexas #HookEm pic.twitter.com/WHVi6LBt7f

Both Smith and Watkins participated in the ceremonial removal of their helmet stripes this month. Originally a walk-on for the UT defense, Ramirez ran for over 120 yards in UT’s scrimmage this past weekend. On Monday, Ramirez was placed on scholarship.

Does this mean anything more than Texas having players that can lead the scout team’s rushing attack and give their regular contributors a breather during practice? In the case of Smith, a 5-7 back who was offered in high school by service academies and Ivy League schools, the answer may be yes.

“He is a scholarship tailback, he really is,” Drayton said. “He is truly a guy that if that room blows up, he can get us out of a game. … If we do get in a crunch and he’s available, don’t be surprised if you see him go in a game.”

Rate me: Inspired by gripes about player ratings in the Madden video game, Jason Washington has started rating his cornerbacks. The players are routinely rated by a jury of Washington, graduate assistants and quality control coaches on overall ability, toughness, awareness, speed and technique. The scores are then displayed for the players to flaunt and bemoan.

How would Washington have fared had these ratings been used when he played at Southwest Texas State from 1998-2001? He said his overall score would have been a seven or an eight. He would have scored a perfect 10 when it came to toughness, though.

“I didn’t play around. I loved hitting people,” Washington said.

Notes: Junior tight end Cade Brewer suffered a concussion during Tuesday’s practice, UT announced on Thursday. No timetable was given for his return. Brewer is projected to be the starting tight end this fall.

Breaking down the offense: A position-by-position look at Texas’ roster, depth

Holding the middle, playing with confidence are two defensive keys to Texas’ season