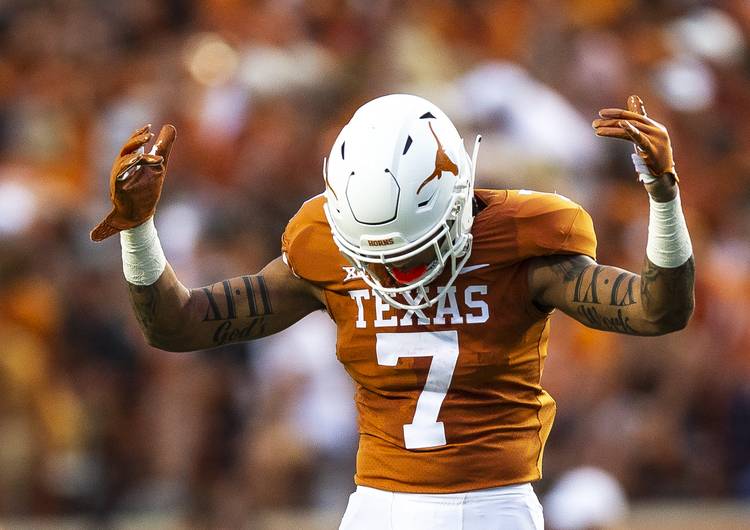 In his first year of classes at DBU, Caden Sterns landed on the honor roll.

Recruited out of the San Antonio area,  the Texas safety started 13 times last season. His four interceptions were tied for the best-ever showing by a UT freshman and he became the seventh Longhorn to win the Big 12’s defensive freshman of the year award. Last year, he registered 62 tackles and a sack. There was also his blocked kick that was returned by a teammate for a touchdown against USC.

Now a sophomore, Sterns isn’t expecting college to get any easier. He, after all, grades his own work.

“I always set the bar high for myself,” Sterns said. “It’s good, but I’m always hard on myself. I’ve got to learn how to reload as me and my coach talked about. Let go of the mistakes or if I made a play well, just let it go and continue to keep playing and have fun with the game.”

When Sterns spoke to reporters in early August, he was admittedly rusty. Sterns missed a portion of UT’s spring drills after undergoing what Texas called a “minor knee procedure.” His dynamic debut had also ended with him leaving the Big 12 championship game on crutches and missing the Sugar Bowl with a knee injury.

“I came to Texas to play in games like that and to not be able to contribute as much as I would have was very disappointing,” Sterns said. “But again, that’s just for me to contribute some other way, which is encouraging, teaching and guiding, doing as much as I can.”

Sterns reappeared on UT’s injury report with an ailing ankle this month, but Texas expects him to be ready for the Louisiana Tech game. The defense that Sterns returns to will feature eight new starters. The Longhorns, who allowed 25.9 points and 392.8 yards per game in 2018, do have two mainstays in Sterns and fellow safety Brandon Jones, though.

What does Sterns need to do to take the next step?

For one, defensive coordinator Todd Orlando wants him to observe how Jones and the other seniors handle something as simple as preparation. Talent isn’t a concern for Sterns, but Orlando thinks on-field mind games might be.

“To me, it’s just playing loose and free,” Orlando said. “I think that’s when he’s at his best. It’s when he’s not out there thinking and can just hunt the ball up. It’s going to take some time for him to just learn how to do that consistently.”

Sterns and Jones aren’t the only talents in the safeties room. “We’ve got really six starters at safety,” UT head coach Tom Herman has said.

Chris Brown and B.J. Foster were tagged by junior Josh Thompson as the the team’s hardest-hitting defensive backs. Thompson told reporters that he’s the fastest Longhorn, a boast that contradicted a similar claim made this summer by senior receiver Devin Duveray.  DeMarvion Overshown, who was described by Sterns as a “missile,” was a four-star recruit in high school. So were Montrell Estell, Tyler Owens and Chris Adimora.

What does all that depth mean? Texas already starts an additional safety at its nickel back position. Over the past two years, the defense has also found success with its lightning package that utilizes six defensive backs. Both Herman and Orlando have hinted at a scenario in which there’d be eight defensive backs on the field at the same time.

“You want to talk about looking like Star Wars for some of these quarterbacks,” Herman said. “I think that’s a fun kind of toy to have.”